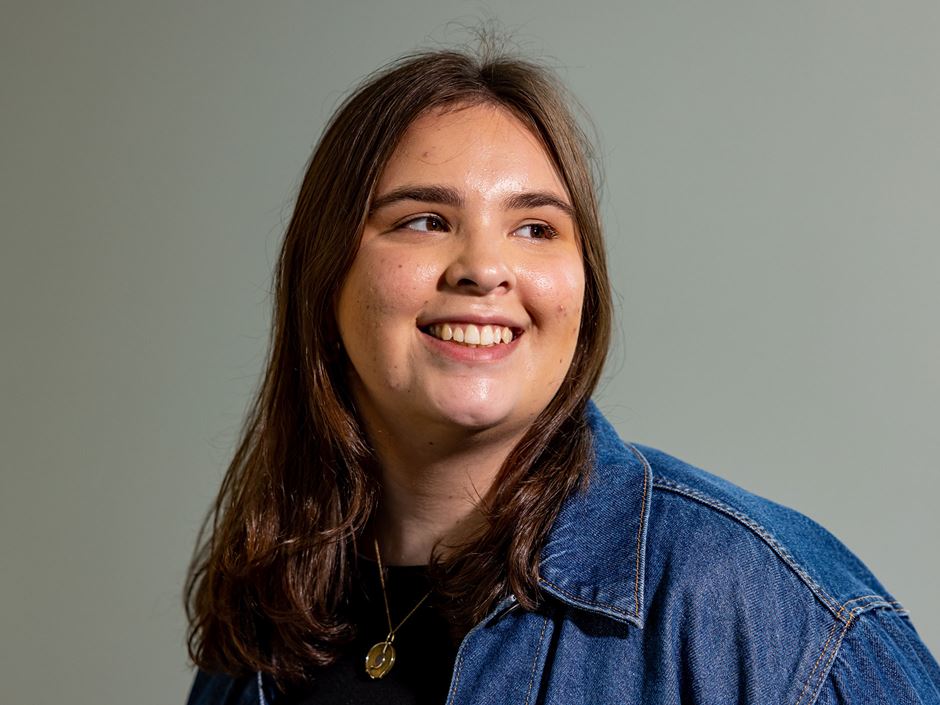 At Endicott, Julia Keegan ’22 combined a passion for pop culture, journalism, and politics, completing internships on Capitol Hill and planning a move to D.C. post-graduation.
By: Rachel Fleming

Julia Keegan ’22 could talk about pop culture all day.

Part of Endicott’s allure for Keegan was the promise that students graduate with a degree and a resume. But when she first scoped out the College as a high schooler, Keegan saw herself pursuing sports management—but pivoting into journalism has taken her to places she never imagined.

Keegan initially wanted to work for Vogue, “but the pandemic changed the magazine industry,” she said. During the height of the pandemic, when the American landscape became increasingly politicized, it felt like a natural progression to move toward politics.

“Professor Melissa Yang’s Social Impact of the Media course completely changed my perspective,” said Keegan. “In class, she explained the three pillars of democracy, which are government, citizens, and media. I nerd out over this triangle because it’s when I realized that everything is connected. In the middle of the triangle is political communications, and that’s where I want to be.”

During her sophomore year, Keegan declared a minor in political science to complement her journalism major. This has proven to be a winning combination, with Keegan completing two impressive internships—first in the Massachusetts Women’s Political Caucus and another for New York Senator Kirsten Gillibrand through the Washington Internship Institute.

“Working for Senator Gillibrand was amazing,” she said. “I fell in love with D.C. and loved working on the Hill.”

Keegan credits her internship success to the professors who made her think outside the box. In a class with Professor Todd Wemmer, she was assigned a project that required interviews with a mortuary cosmetologist.

“I was just calling up all these funeral homes asking if anyone was willing to be interviewed for a school project. It was super awkward, but it ended up being such a great learning experience,” she said.

Keegan learned what it meant to put herself out there, which helped prepare her for the cold-calling many political internships require. Even these seemingly weird class assignments have had an impact on her resume.

“I had no idea what my resume would look like at the end of four years, but now I have this amazing resume,” she said, beaming. “It’s the dream resume!”

The dream resume she is so proud of contains much more than internships and academic achievements—Keegan has been one of the most active student leaders on campus. Her long list of clubs and activities includes running HerCampus, founding the Endicott chapter of SURJ (Showing Up for Racial Justice), working as a Resident Advisor, creating podcasts, and mentoring underclassmen.

Her first foray into campus leadership was as the social media manager for HerCampus. That was also where she found mentors who helped her find purpose and community at Endicott.

Now, she tries her best to give back, too. “I’m proudest of the younger leaders I’ve mentored who are running these incredible clubs on campus now,” she said.

On the cusp of graduation, Keegan is wrapping her thesis on Boston Mayor Michelle Wu, working to pass along the leadership baton within her clubs, and trying to spend as much time with her friends as possible.

This summer, Keegan will head back to D.C. to live and intern with the nonprofit EMILY’s List, where she “will work to help democratic women get elected who are pro-choice,” which, in light of the recent Supreme Court leak on overturning Roe v. Wade, “is more important than ever!” Keegan said.