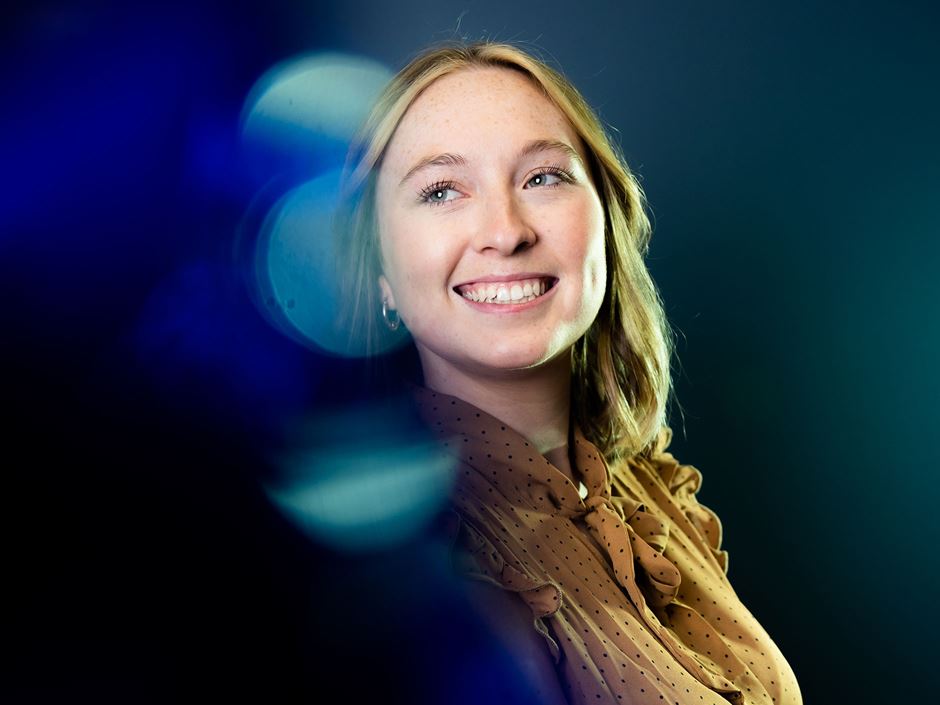 For Sarah Horgan ’22, a passion for HGTV inspired an Endicott education and a professional pathway.
By: Megan Tkacy

This is one in a series of profiles spotlighting Endicott’s outstanding 2022 graduates. Read about Will Levine '22, Sam FanFan, Fernanda Trevino '21, Jamyang "Z" Tamang '22, and Colby Yokell '22.

From a young age, Sarah Horgan ’22 spent Sunday evenings watching HGTV’s “Extreme Makeover: Home Edition” with her mother. For Horgan, it was more than a show—it inspired her to pursue a career in interior design.

“I love the impact they had on people, and how they were able to use design to bring so much joy to people who’ve been through so much suffering,” she said. “That was my first exposure to design that created an impact.”

Watching home design and renovation shows ignited a passion within her, and soon she was rearranging her room and taking an eager interest in other spaces. “Every time we went to a new place, I would always walk around. I’d go to the bathroom even if I didn’t have to go,” she admitted with a laugh. “I just wanted to see what everything looked like. I was inspired by the buildings and spaces around me from a really young age.”

In her junior year of high school, she participated in a week-long design program at Mount Ida College where she gained experience to back her interest in design. “We learned how to use SketchUp and other software, how to do schematic design and bubble diagrams and adjacencies—things I’d never heard of before,” Horgan said. “Luckily, coming into college, I had a little bit of a background in design.”

For Horgan, choosing Endicott was simple. In her early teens, she fell in love with the campus while touring it with her brother Ben Horgan, the current Director of the College’s Tutoring & Writing Center. “At 14, I decided I was going to come to Endicott. It was beautiful. At that point, I didn’t really know what I wanted to do yet, but I was hoping I could find my place here.”

Another important factor was Endicott’s design program. Horgan knew she wanted to pursue an artistic field, admitting that “general academics” were never her “favorite.” “I was involved in art, dance, and music throughout high school. So, rather than just having those be hobbies, I wondered how I could transform those into a way to make a living. Design was a structured way to put my creative talents into place.”

At Endicott, Horgan’s been able to narrow her focus and expand her skill set through several internships. Most recently, she interned at SGA in Boston, where she accepted a full-time junior interior designer position upon graduation.

“In the beginning, I was getting thrown a lot of the work that people necessarily didn’t have a lot of time for, and that’s the perfect situation for an intern. I was able to get to know reps, I was able to get to know the library of materials and brands that I’d never heard of,” Horgan recalled. “As an intern, you want to be thrown a little bit of everything, at least in the beginning, to fully get a grasp of the real world and what is going on around you.”

Over time, she developed relationships with others at SGA and was recruited for long-term projects. Before long, she was leading lunch-and-learn sessions at the firm, all while steadily improving her expertise. “Endicott has a great way of supporting students. They were incredible throughout my entire experience in all three internships that I did,” she said. “Without Endicott’s internship program, I absolutely would not have a job right now before graduation.”

But getting to this point required persistence, too. As the recipient of a competitive full scholarship from the Council of Independent Colleges, Horgan needed to maintain a 3.0 GPA or higher while taking rigorous design courses. “I always felt like I needed to be held to a little bit of a higher standard in order to prove that I deserved it,” she said.

At Endicott, she also worked in student government, served as an orientation leader, attended the LIGHThouse leadership retreat—and became one of its facilitators, working with Project Connect and participating in the SHE Aspires Higher retreat.

Now, with her time at Endicott coming to an end, Horgan’s not only got the job, but big dreams for the future too.

She wants to pass by a building and say: “I designed that.”