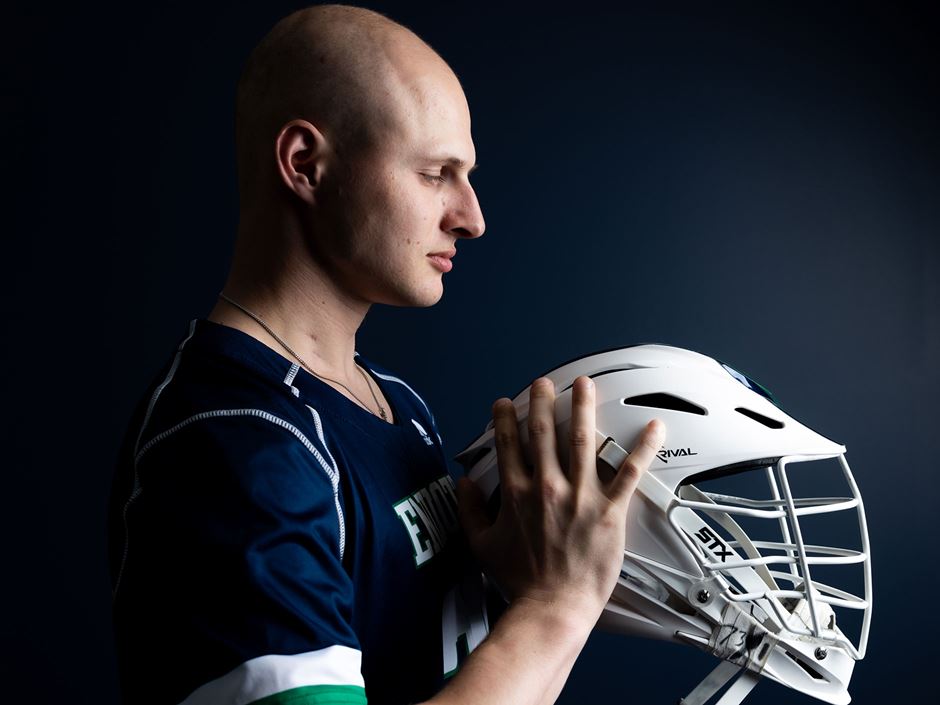 Cancer may have stopped Will Levine ’22 from taking to the lacrosse field, but it didn’t stop him from learning, evolving, and graduating on time.
By: Danna Lorch

This is one in a series of profiles spotlighting Endicott’s outstanding 2022 graduates. Read about Sam FanFan, Fernanda Trevino '21, Jamyang "Z" Tamang '22, Sarah Horgan '22, and Colby Yokell '22.

“It made me think more deeply,” he said. “It got me into a stronger mindset, and I think that helped a lot through the 18 months that came next.”

At the time, he had never faced real adversity in life—but that was about to change.

Although he’d been recruited from Southborough, Mass., to the Endicott men’s lacrosse team as a midfielder, Levine has yet to play his first full game—yet his unwavering presence through countless peaks and valleys has helped anchor his team.

His freshman year, Levine tore his shoulder labrum and missed the entire season. He returned as a sophomore set to take the field, but Covid sent everyone into lockdown before he got the chance.

Then, over the summer on his brother’s birthday, Levine was diagnosed with diffuse large B-cell non-Hodgkin’s lymphoma and immediately started chemotherapy and radiation. That was followed by a second devastating scan, an even more challenging round of treatment, and a bone marrow transplant.

Levine told his teammates that he was determined to push through all of it, return to the field, and graduate on time. And remarkably, he’s made good on that promise.

“I definitely grew up at a younger age as a result of all this,” Levine said. “And as weird as it might sound, I felt ready going into the bone marrow transplant because Covid had made me start to really think about life.”

Despite the toll the treatment took on his body, Levine felt the need to speak out about what he was going through. “My father has always told me to be kind to others and to give back,” he explained.

That advice guided Levine to connect with the HEADstrong Foundation, a nonprofit founded by the late Nick Colleluori, a lacrosse player at Hofstra University. “They give money to families who are struggling to pay bills for cancer and give them an outlet—whether it’s transportation to the hospital, food, parking, or housing,” said Levine. 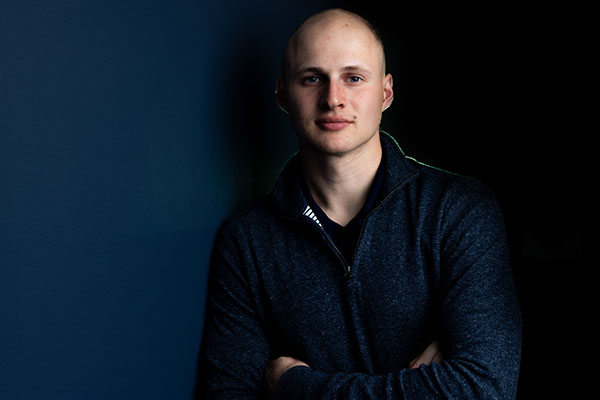 Getting involved with the foundation took Levine out of his head and watching donations pour in because of his efforts gave him a reason to smile even on the tough days. “I had one person say, ‘This is all I have, but here you go,’” he remembered. “It was so sweet. It’s a great feeling to be able to help others even when you’re at the deepest low of your life.”

And back at Endicott, he had 50 brothers cheering him on too. “The thing about sports teams here is that once you’re on a team, it’s a family right away. Those are the 50 guys you hang out with all the time,” he said.

Levine started playing lacrosse at age six after watching his older brother’s games. Over the years, the sport trained him to stay present, focused on the fight at hand. “The game is just tunnel vision and everything that is going on outside in your life doesn’t really matter.  Once you’re on the field, that’s the only thing you’re focusing on,” he said.

Concurrent with his bone marrow transplant, Levine, a business management major, completed a virtual marketing internship with healthcare solutions company, Boston Scientific, which he described as “very fun.” His task? Create an artificial intelligence training module. “I really liked getting to think about where the industry is headed in a decade—or possibly even sooner,” he said.

These days, he’s considering going into marketing or sales in healthcare, a sector he never would’ve thought to explore before his diagnosis threw him into the world of hospitals and specialists.

But before graduation, he’s trying to spend as much time on the field as he spends on Endicott’s beach with the friends he didn’t get to see for the years he was away. “Just being able to hang with friends—just having friends right at your fingertips—is such a special part of college, he said. “It’s a luxury to have your support system right there next to you.”

Will Levine would like to dedicate this story is to the amazing nurses and physicians who cared for him at UMass Memorial, Boston Children’s Hospital, and Dana-Farber Cancer Institute.