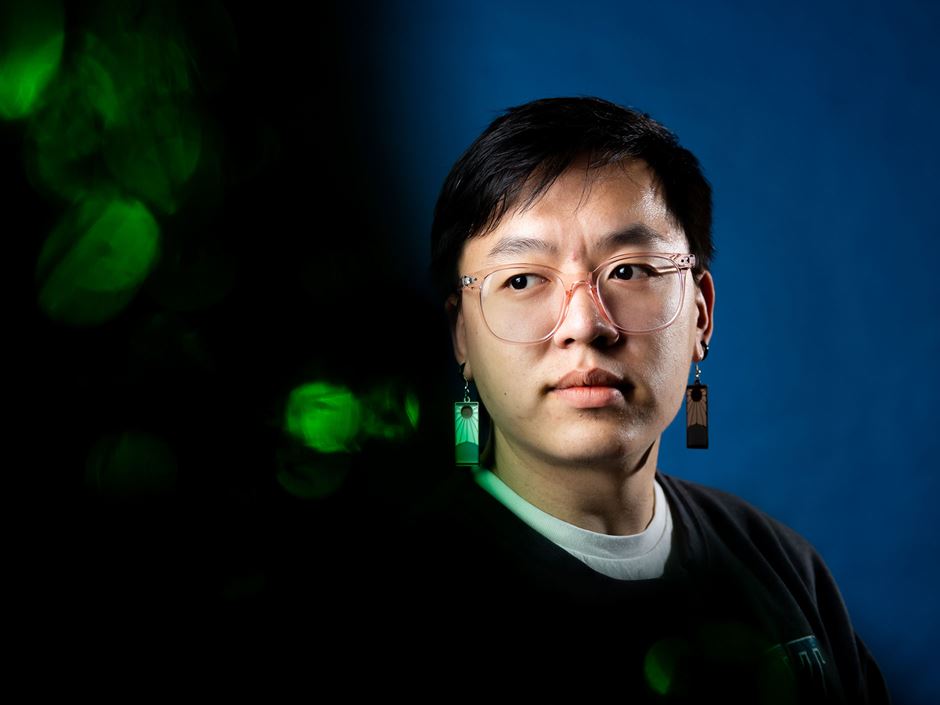 International student Jamyang “Z” Tamang ’22 pulled late nights learning to program, helping to win a hackathon and learning a lot about himself along the way.
By: Danna Lorch

This is one in a series of profiles spotlighting Endicott’s outstanding 2022 graduates. Read about Will Levine '22, Sam FanFan, Fernanda Trevino '21, Colby Yokell '22, and Sarah Horgan '22.

Jamyang Tamang ’22 is known simply as “Z” (if you know, you know) by his friends and professors at Endicott. He Zooms into our interview from the lounge inside the Ginger Judge Science Center where he’s pulled plenty of all-nighters—both for computer science classes and as part of the winning team for WHACK, a virtual hackathon that they crushed by developing an app to combat police violence domestically.

His roommate and WHACK teammate Matthew Cruz ’22 is programming away on a laptop offscreen and occasionally interjects with quips. When Z flounders after being asked to name the Anime character that best represents him, Cruz yells, “Definitely Yuji Itadori.” Z nods his head in agreement—the good-natured, free-spirited student at a sorcery academy who would do anything for his friends is 100% Z.

Computer programming is a kind of sorcery to those who don’t speak multiple languages—and it’s something that Z has mastered during his time at Endicott. His most challenging computer science project came during sophomore year in Professor Michael Ocean’s computer architecture course and involved a pinball machine.

Ocean, a leading writer of base codes for pinball machines, challenged the class to write their own programs for the machine using the programming language Java. “I just grinded in here with my class for two weeks,” Z remembers with some nostalgia—for both the camaraderie and the greasy fast food that went down in the lounge.

He learned from that experience that he likes to be presented with seemingly impossible technical challenges. A linguist at heart, Z speaks three languages and has learned to program in five. He relishes the feeling of not understanding a puzzle and then learning to break a language down into decipherable codes. It took coming to Endicott to get to know his passion for computers and software engineering.

Growing up as the son of two government officials in Sikkim, India, Z imagined a simpler future for himself at a local technical college. But he attended an international high school and the principal happened to be from Beverly, Mass., and good friends with Charlotte Gordon, Distinguished Professor of English at Endicott.

“She was our connection,” says Z. When he spoke with Gordon and learned that other students from his high school were succeeding at Endicott, he eagerly applied.

Because he’d binge-watched all 10 seasons of Friends, he assumed that adjusting to American college culture would be easy—but it turned out to be anything but.

“Everything was so different and freshman year was pretty lonely,” he confides. With his edgier, fun style, Z stood out as effortlessly cool and unique but still felt too inhibited to say hello first when he walked by classmates.

And the College’s liberal arts curriculum deeply expanded his world views. Two of Gordon’s courses raised his consciousness about identity and racism in America. “They really helped me grow,” he says.

In her nonfiction writing workshop, he cherished the weekly writing prompts. “I used to think I was a bad writer before that class, but everyone was so supportive,” he remembers.

But Z says the best time of all was spent living at Endicott and interning at Thrive Bioscience last summer. He recommends living on-campus for one summer to everyone. “Everybody is in a happy mood and it’s just a really positive place,” he says.

Although he deeply enjoyed the work, Z learned that he likes to work on a bigger team rather than in a quiet lab. He’s currently applying for software engineering jobs—maybe something with a lounge much like Endicott’s where he can hum the Phineas and Ferb theme song while programming away.