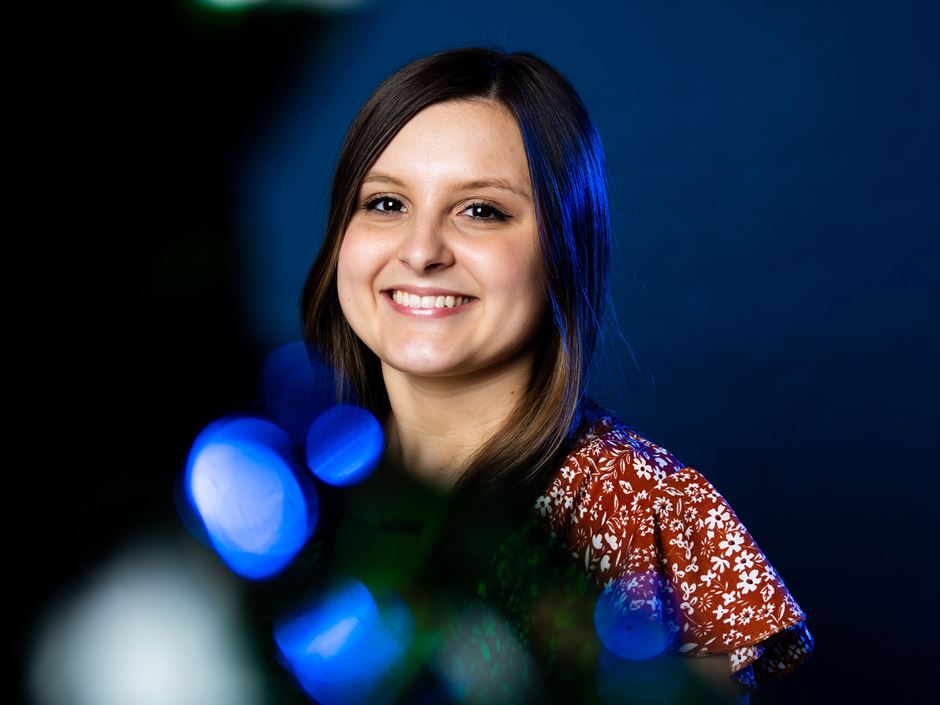 Colby Yokell ’22 was just a small-town girl, and now she’s off to pursue her literary dreams through acceptance into the New York University Summer Publishing Institute.
By: Sarah Sweeney

This is one in a series of profiles spotlighting Endicott’s outstanding 2022 graduates. Read about Will Levine '22, Sam FanFan, Fernanda Trevino '21, Jamyang "Z" Tamang '22, and Sarah Horgan '22.

Growing up in a small town, Colby Yokell ’22 immersed herself in reading and writing, eventually becoming a stringer reporter for the Somerset-Swansea Spectator, covering interesting topics like … her own high school.

“All the controversial stuff, too,” noted the Berkley, Mass., native.

Berkley was so small that it didn’t even have a high school—“we just got our first gas station and sit-down restaurant a few years ago,” Yokell said—so she attended Somerset Berkley Regional High School a town over, where she proved that, even in smalltown America, there’s no shortage of drama.

“One year the teachers were working without contracts for months and months because the administration couldn’t agree on terms with the unions,” said Yokell. “So, that was a really fun story, because both sides were so heated, and I got all the gossip.”

She also carved out time to serve as editor for her high school newspaper, even if it was slightly less glamorous than nabbing the cover story on the town periodical.

But literary pursuits of any kind have always interested Yokell. “There are pictures of me from four and five years old and all my toys are surrounding me,” she said, “and I’m just reading a book instead.”

In middle school, she penned her first novel, a dystopian, Hunger Games-esque tale that stretched Yokell’s creative muscles and took her a year to finish. “Now, it’s hiding in the cabinets,” she joked. “I haven’t let anyone read it because … it’s bad.”

It was always Yokell’s dream to write a book, but as she got older, that dream changed. “I still love creative writing, but I haven’t done it in so long. Then, as I got to high school, I really fell in love with journalism. And I was like, ‘This is what I want to do. This is what I want to go to school for. I want to work in the news world after graduation,’” she said.

“I did my first internship at a really small publishing house in New Bedford called Spinner Publications and I loved it,” she said. “First day of work, I got there, and I was like, ‘This is what I want to do. One hundred percent.”

The experience drew upon Yokell’s passion for the written word in new ways. With her knowledge and understanding of the mechanics of writing—coupled with her voracious appetite for books—she could be a literary tastemaker. Through the literary magazine The Endicott Review, Yokell began assessing submissions and envisioning herself as a book editor.

Now, on the cusp of graduation, the English language and literature major has just received the news of a lifetime—acceptance into the prestigious and highly selective New York University Summer Publishing Institute.

“I’m really excited for it,” said Yokell. “New York City is where you have to be for publishing, so it’s a really great way for me to build those connections in order to get a job.”

The month-long program features workshops, hands-on strategy sessions, industry visits, career fairs, and networking opportunities with New York’s biggest publishing houses. Only 100 applicants from all over the world are admitted each year.

“This is a way for me, as a small-town person who went to a relatively small college, to be able to get my foot in the door at these companies,” she said. “I was so surprised when I got the email from NYU. I was looking at my computer, and I literally shouted out loud.”

She credits Distinguished Professor of the Humanities Charlotte Gordon for her recommendation letter and Associate Professor of English Samuel Alexander for his advising help.

“The community here is amazing,” she continued. “I always joke to my friends that I can't leave my dorm without talking to someone that I know. Because every time I leave, I feel like I see a friend or friendly face. And the professors—everyone—just really care about you. And that’s something that has continued to be reinforced to me in my experiences here.”

Yokell also found time to spread that care, too. In her role in the Intercultural Club and as a Global Ambassador, she served as a mentor for international students, “because they have so many amazing stories, and they have so much to offer to this campus,” she said. “Hanging out with them and listening to their stories has really helped me grow in my perspective of the world without ever having to leave campus.”

But their stories also inspired Yokell to study abroad. Her junior year, she went to Madrid, which was a life-changing experience. “I learned so much about a different culture, I made friends in different countries. And it helped me gain more confidence in myself as both a traveler and as a person. And I think I’m taking a lot of this confidence with me to New York and this program.”

Yokell sees herself bringing that multicultural lens to her work in the still white-dominated world of publishing.

“My favorite type of literature focuses on people whose stories usually don’t get told—people of color, immigrants, or the LGBTQIA+ community,” she said. “Part of what I loved about journalism is that it can make a change. And for me, publishing serves that same purpose.”