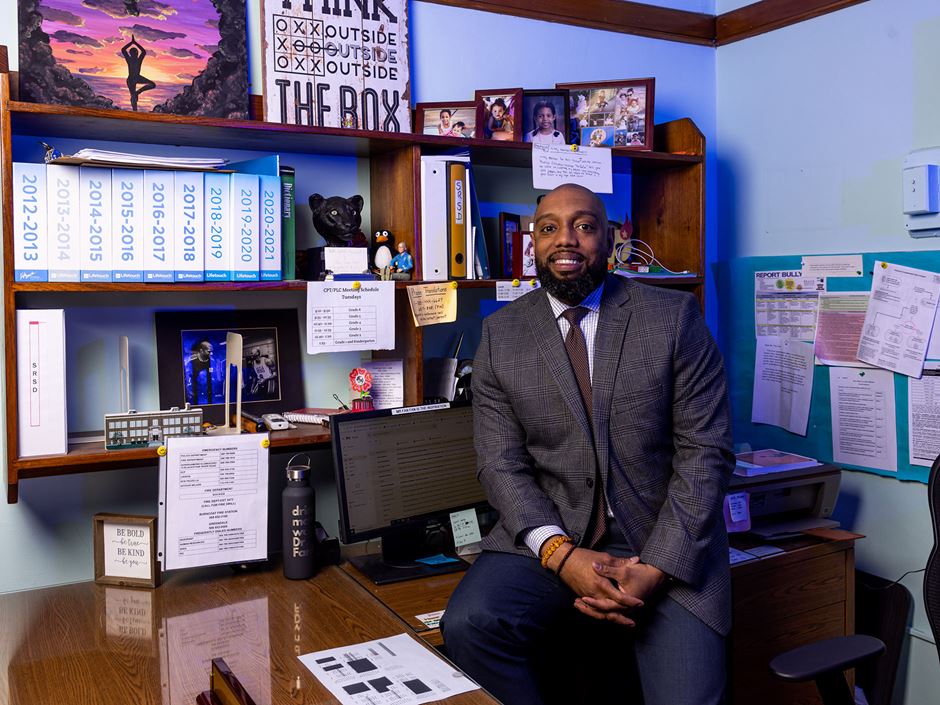 Worcester principal Sam FanFan juggled work and family with going back to school for his doctorate—but found community, success, and a mission while at Endicott.
By: Sarah Sweeney

This is one in a series of profiles spotlighting Endicott’s outstanding 2022 graduates. Read about Will Levine '22, Fernanda Trevino '21, Jamyang "Z" Tamang '22, Sarah Horgan '22, and Colby Yokell '22.

Sam FanFan was working as an assistant principal for an elementary school when he and some colleagues decided to pursue doctoral degrees—together. They conferred, browsed schools, and decided on Endicott’s School of Education.

“It was just a casual conversation,” remembered FanFan, “and the next thing I know, we were all signed up. Now here we are, and we’re all doctors.”

Last summer, FanFan became the principal at Burncoat Street Preparatory School in Worcester, Mass. He was still knee-deep in his studies alongside his classmate and now-former boss, principal Yeu Kue, who’d recognized early on that FanFan had what it took to lead an institution of his own.

Kue and FanFan, along with colleague Hong Ly, will now graduate together this month. The trio’s friendship has been a tremendous boon for FanFan, especially because returning to school can be a challenge for many professionals who must balance family obligations and day jobs with studying and writing papers. 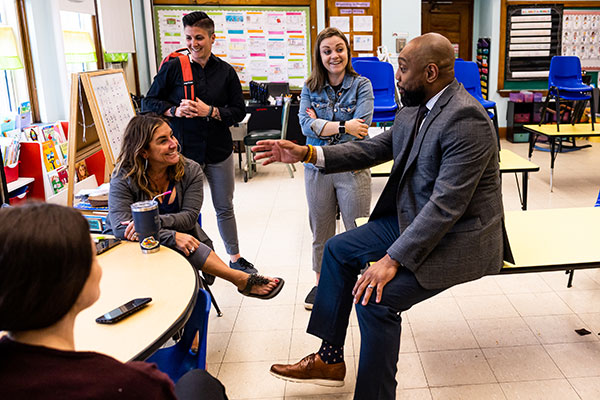 “When you’re in college, you roll out of bed, you go to class, you come back, you hang out with your friends, and then you tackle assignments,” said FanFan, whose degree is in educational leadership in PreK through grade 12. “But when you go back in your 30s, you’re trying to juggle everything and still trying to be the best student you can be.”

Luckily, FanFan doesn’t sleep much. “I navigate things during hours when others would think that I should definitely be sleeping,” he said. “It just works for me.”

Late nights, coupled with support from his wife Katie and two daughters Kyla and Kaelani, helped FanFan along the way. Not to mention his Endicott cohort.

“From the day we all met, we exchanged numbers. We had a group text, and we all motivated each other. We all supported each other. And it was so helpful to know that people were all feeling the same way—we were all adults, we all had families,” he said.

“If anyone were to ask me what they need to be successful in this program, I think number one, your home front. You have to have somebody in your corner who’s going to take care of a lot of the other crazy that goes on so you can dive into writing,” he continued. “I owe my wife a lot. I wouldn’t have been able to get through it without her.”

FanFan grew up in Fort Lauderdale with dreams of turning his basketball talents into a career. But his father encouraged him to have a solid Plan B.

“As much as I love sports, I started loving teaching and understanding the nuances of teaching and helping kids,” he remembered.

He started working at basketball camps, which led to student teaching during his time at Becker College and eventually teaching physical education for 12 years.

During that time, another one of FanFan’s principals encouraged him to go back to school. “She saw something in me where she was like, ‘Instead of impacting small classrooms, you can impact an entire building, you can impact a district,’” he said.

FanFan enrolled at the American International College, then obtained his license in early childhood education. But returning to school at Endicott pushed FanFan to tap into skill sets “that I had to dust off,” he said. Like writing.

FanFan kept at it, and when it came time to pen his dissertation, he interviewed educational leaders across Massachusetts and wrote about the experience of superintendents of color in the state.

“There’s a lot that goes on at the job that I think the naked eye doesn’t see, but for them, sometimes the challenge is that they could be the only person that looks different from everyone else in certain meetings,” he said. “I’ve been having conversations with close friends about how representation matters. How can we support little kids that look like us and give them more hopes and aspirations of not just being athletes when they get older?”

At Burncoat Prep and beyond, that’s now his task—but there’s still time to grow up and become a superintendent, too.

“I don’t know if being a principal is my last stop,” he admitted. “But having a doctorate is very helpful.”