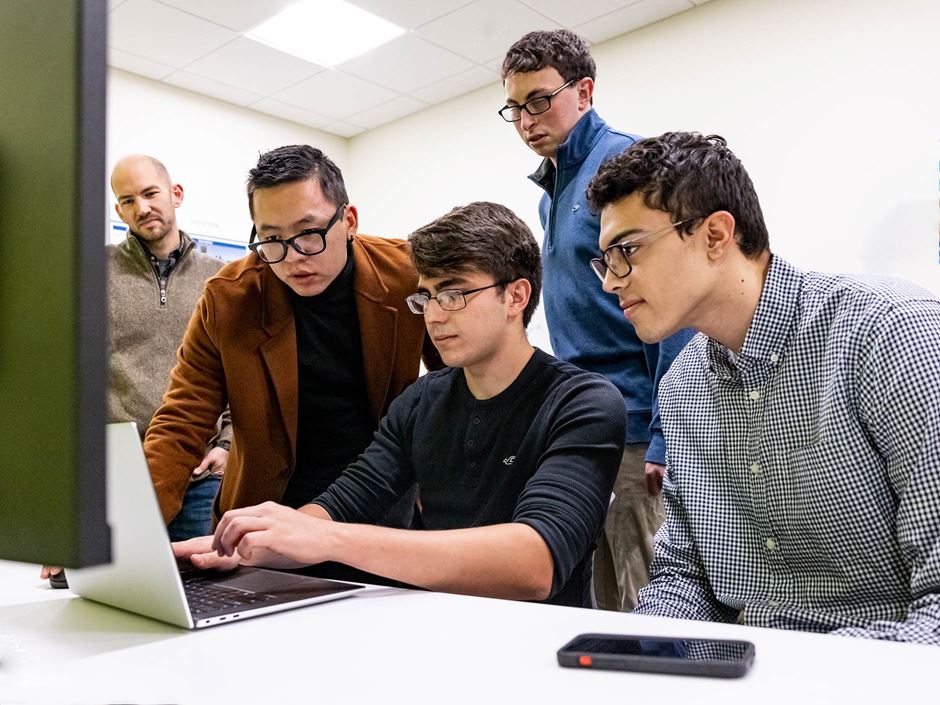 A team of Endicott computer science majors recently entered and won their first hackathon by developing a cutting-edge prototype for ALive, an app for witnessing and documenting police violence.
By: Danna Lorch

“There’s this idea that hackathons are about cyber hacking,” explained Endicott College professor Hank Feild and faculty sponsor of the Computer Science Club, “but hackathons are almost exclusively about hacking together a prototype to do something cool.”

A team of Endicott computer science majors and club members recently did just that, entering their first hackathon and developing a cutting-edge prototype for ALive, an app that can be used to witness and document police violence. Their entry won Best Hack for Social Good at WHACK, a virtual hackathon hosted by Wellesley College in partnership with Major League Hacking in November. 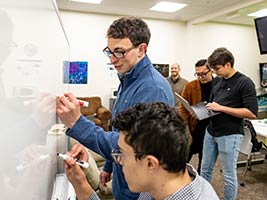 When Feild received the invitation to WHACK, he knew it would be the perfect challenge for Computer Science Club members to apply the day-to-day skills they’re learning in Endicott’s project-based classes. Club president Greg Hosking ’23 took initiative immediately and put together a team that included Jamyang “Z” Tamang ’22, Luke Jodice ’23, and Matthew Cruz ’22.

Cruz brought the winning concept to the group. “I thought it’d be a great tool for people to defend themselves in holding the police more accountable,” he said.

Although none of the team members have experienced police brutality or misconduct in their own lives, they felt morally compelled to use their coding powers to make a positive difference anyway.

“It didn’t directly affect us,” said Hosking, “but we’ve seen so much of it that we felt we had to do something about it.”

Due to the pandemic, WHACK 2021 was fully virtual. From the time the Endicott team logged on to the event to the moment their product was due was just 24 hours.

“Cruz had the idea and we liked it, so we just rolled with it,” explained Tamang, Cruz’s roommate.

Fueled by McDonald’s and Red Bull, the team huddled together in the computer science department lounge working as collaboratively and efficiently as possible.

“We barely slept. It was a grind to say the least,” admitted Cruz.

The team started out by mapping the steps to building the app on a giant whiteboard. Jodice learned as he went.

“Matthew and Z had the most experience with the programming language, so I looked to them as senior developers. I asked them a ton of questions and then built off their answers with what I knew,” he said.

Tamang said the group chose to write the app in React Native, a popular language he learned in Professor Michael Ocean’s course on mobile application programming. “React Native allows us as programmers to write code that works for both Android and iPhones,” said Tamang. “The idea behind using this web frame was so we’d have a wider reach when it comes to the audience.” 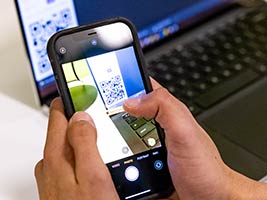 In the U.S., it’s a First Amendment right to record police officers and other law enforcement members carrying out their duties. Phones or other devices cannot be searched without a warrant. Hosking hopes that ALive can enable bystanders to act as credible witnesses.

“Many times, just seeing something happen isn’t enough if you need to prove it later in a court. Having a video that can't be destroyed by someone who doesn't like the fact that you recorded them is really powerful,” said Hosking.

Tamang said that the trickiest part of building the prototype was figuring out how to connect the app to a phone camera.

“The idea is that when you get pulled over, you enter the app, and you click record on the camera icon. It starts recording and uploading your data to a database. When you access your videos later, you automatically have a copy of it,” Cruz explained.

That means that even if the phone is destroyed or confiscated, the recording is safely stored in the cloud, where it can be accessed as evidence in potential future legal proceedings.

Roommates Tamang and Cruz watched the awards ceremony from their Endicott living space. They’d hoped to win WHACK’s Best Beginner Prize, but after that honor went to another team, Tamang shook his head and said, “Alright. Shut it down. We’re not winning anything.”

An optimist, Cruz insisted they stay on until the end: “The next award announced was the winner for the social good category. When they said ALive, we started screaming.”

The experience was so meaningful that the team is on the hunt for another hackathon to enter this winter. The ALive app isn’t yet complete, but the team hopes to secure seed funding to further develop and drop it as a free service to the public soon.

And the experience has given Cruz, who graduates this spring and is starting a job search, solid direction. “At the end of the day, when my career is over, I just want to have made a lasting impact with useful projects that reach a lot of people,” he said.