It is the belief of Endicott College’s on-campus club, the LIGHThouse Leadership Society, that all students can be leaders. The three pillars of LIGHThouse are: Self-reflection: the increase of self-awareness by examining the way these concepts relate to the self and exploring one's own biases; Awareness: the sharing of information to better understand concepts related to respect, civility, diversity, and the impact on decision making and behaviors; Activism: the use of our developed skills to create meaningful social change at Endicott and beyond. 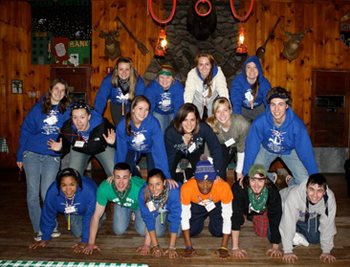 While LIGHThouse has been on campus since 2010, its popularity has continued to grow – mainly due to the annual LIGHThouse retreat. Held each fall at Camp Cody in Freedom, NH, the retreat is a three-day “escape” from campus where students remove themselves from all social media and electronics (no phones, no computers, and no watches) and engage with one another in a way they are not typically comfortable with. The end goal of the weekend is to have students come realize their abilities to lead through Learning, Inspiring, Guiding, Helping and Teaching.

To participate in the annual retreat, students must submit an application, which remains anonymous throughout the entire selection process. LIGHThouse welcomes applications from students of all years, regardless of whether-or-not you are an active member of the Club. Each year, 40 students are selected anonymously by LIGHThouse student facilitators. This year, it took eight facilitators nearly eight hours to narrow down the 97 submitted applications to 40.

Over the course of the weekend retreat, students are divided into four groups of 10 where they participate in non-traditional leadership activities, as opposed to ice breakers and trust falls. The primary focus is on workshops that are run by the eight student facilitators. The students are challenged through these activities that raise self-awareness, require personal reflection, and encourage them to be active as leaders on campus and in their communities. The objective is to have students see the leaders that they already are and to nurture those strengths in a way that builds a community amongst one another and then translates upon their return.

To date, there have been eight LIGHThouse retreats with 285 students having attended in total. The LIGHThouse Leadership Society has seen a steady rise in applications each year – the first retreat only having 30 applicants.