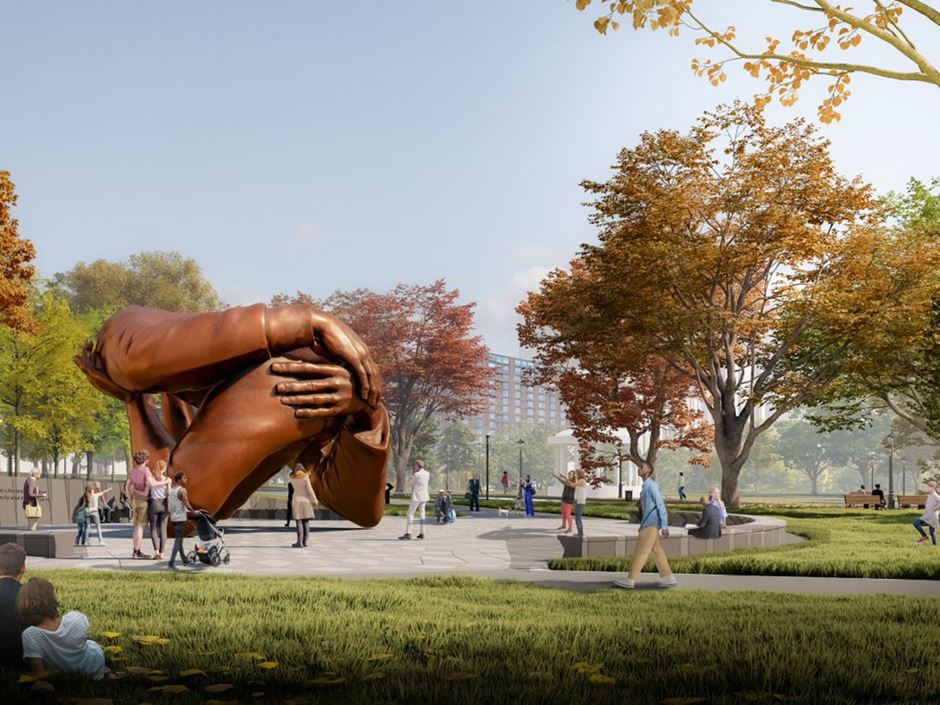 As Boston plans to unveil a massive bronze sculpture commemorating the life of Martin Luther King Jr., we spoke with Associate Professor of History Elizabeth Matelski about the civil rights pioneer and the profound impact of public art.
By: Sarah Sweeney

Yet Boston was a formative place for the groundbreaking civil rights leader who often referred to the city as his second home. While earning a Ph.D. in theology at Boston University, King met his future wife, Coretta Scott, in the city; he lived on Massachusetts Avenue at the time.

Now, on January 13, just a few days before Martin Luther King Jr. Day (January 16), city officials will host a public unveiling ceremony on Boston Common for The Embrace, a new sculpture commemorating King, Coretta Scott King, and the civil rights leaders who worked alongside them in Boston.

Designed by internationally acclaimed artist Hank Willis Thomas, The Embrace is a massive bronze sculpture (20 feet high and 40 feet wide) built by more than 100 workers inside a workshop at The Foundry in Walla Walla, Wash. It is the first new memorial on Boston Common in 30 years.

“Monuments are place-based, and they need to make sense where they’re located,” said Associate Professor of History Elizabeth Matelski. “Placing the statue in the Common—the country’s oldest public park—is notable. You’re elevating the visibility and importance of the monument and, at the same time, updating the story that the Common tells.”

Throughout his life, King returned to the city again and again, including in 1963, just weeks before he was jailed in Birmingham, Ala. At Ford Hall, King said, “the estrangement of the races in the North can be as devastating as the segregation of the races in the South.”

Two years later, a month after his march from Selma to Montgomery, Ala., King addressed the Massachusetts State Legislature before leading the first civil rights march in the Northeast from Roxbury to Boston Common. It was there, on April 23, 1965, that King called for Boston citizens to live by their highest ideals.

Take a stroll through Boston Common now and you’ll find “white men on top of horses,” said Matelski—a reminder of the city’s role in the American Revolution and Civil War.

“This new monument, in both its presentation and the individuals it memorializes, will modernize and expand the Boston story,” she said. “I’m also mindful that this monument will be a celebration of both Dr. King and Coretta Scott King, not just a statue of the former. In her own lifetime, Scott King was a formidable activist whose legacy has been overshadowed by her husband’s.”

Matelski—who for the past year has been researching the history of Robin Mingo, an enslaved man who lived in Beverly, Mass., and the namesake of Endicott’s own Mingo Beach—said that public art reminds us of who we are and where we came from. 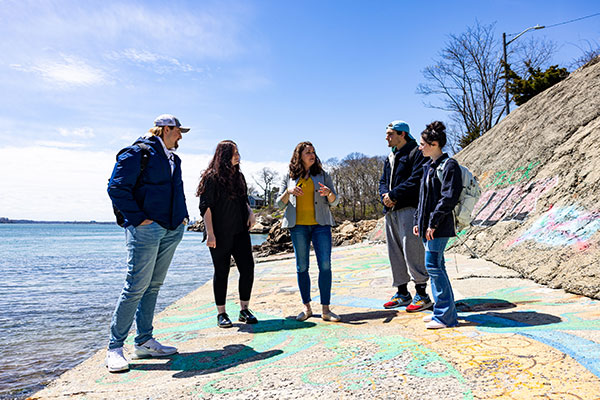 “It can highlight both the little-known and the important stories of a neighborhood. It can revitalize a community and bring civic pride to that place. And best of all, because it’s public, it’s free to everyone,” she said.

Public art can also be a morale booster and a symbol of international support, as recently evidenced in Ukraine, where seven new murals appeared by renowned anonymous artist Banksy.

Per Matelski, Banksy’s murals also hearken back to King’s legacy.

“What Banksy and similar artists do is an example of Dr. King’s own strategy of nonviolent direct action. I’m reminded of photographs and newsreels that came out of Birmingham in 1963 when Black school children were being attacked by police dogs and pummeled with extreme water pressure from firehoses,” she said. “Those images forced white America to consider if they had more in common with the citizens fighting for their civil rights or the white supremacists refusing them those rights.”

What to do on MLK Day?

The College will be closed on Martin Luther King Jr. Day, but Boston’s Museum of Fine Arts will offer free admission in honor of King. See what’s on at the museum.

Afterward, take a walk down the 1.6-mile Black Heritage Trail in Beacon Hill, capping off the day with a visit to the Museum of African American History.

Read what our faculty had to say last year about King’s legacy.