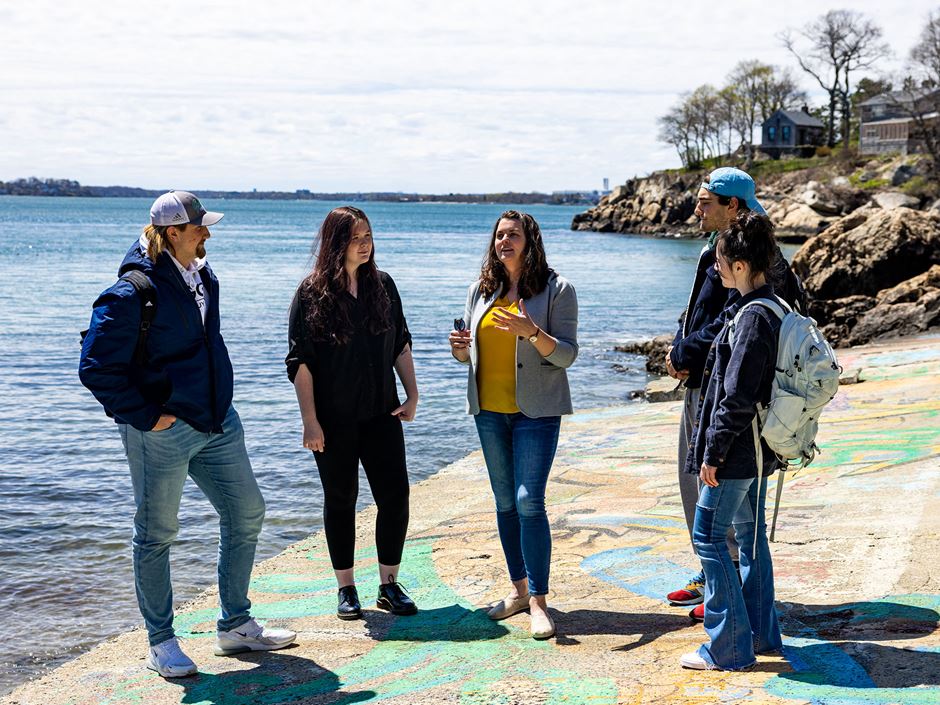 “As a historian, I always tell my students that one of our greatest responsibilities is to correct the myths of the past because without accurate knowledge of history, the present is chaotic and the future is unclear,” said Elizabeth Matelski, Associate Professor of History.

And when it comes to Endicott’s past, arguably the greatest myth is that of Robin Mingo, namesake of Mingo Beach, one of the College’s three picturesque shorelines.

A lesser-known, troubling truth is waiting somewhere on the beach, and Matelski and her students have been on the hunt to uncover it as accurately as possible. 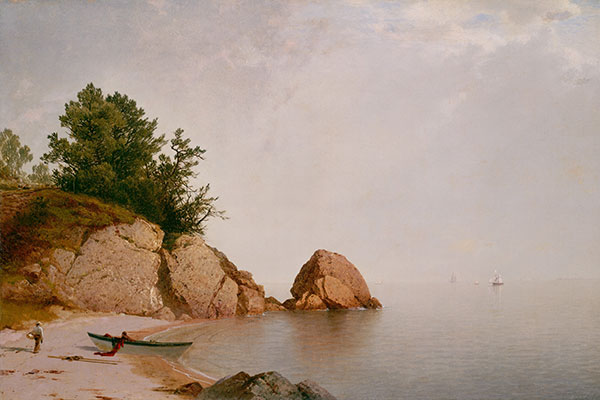 Mingo Beach, depicted in the painting Beach at Beverly, c. 1869/1872, by John Frederick KensettThe journey started during the lockdown of 2020. One monotonous day, Matelski was cloistered on her back deck in Melrose, Mass., when her colleague, Associate Professor of English Sam Alexander, rang her up and first told her about Mingo.

It was right after George Floyd’s murder, and she’d been brainstorming ways for the Endicott community to become even more inclusive. Mingo’s story struck a deep chord.

This is public history right here in our backyard, she thought to herself.

Robin Mingo was an enslaved man who lived along the beach’s shores from 1661 until 1748 and was married to a free indigenous woman named Deborah Tailor.

“Legend has it, Mingo’s enslaver, Thomas Woodbury, promised the man’s freedom if the tides recessed enough for him to walk from the shore out to a rocky passage known as ‘Becky’s Hedge’ or ‘Aunt Becky’s Ledge’—a rare phenomenon, the story continues, that had occurred on the day of Mingo’s involuntary arrival in Beverly, Massachusetts,” Matelski explained.

Some versions of the story conclude with Mingo achieving this once in a blue moon feat while, in others, he drowns. Will we ever know what really happened?

Either way, the story “highlights the casual and cruel way in which freedom could be awarded or denied,” said Matelski, and deserves to be publicly told, examined, and respectfully marked.

This spring, Matelski and the 20 students enrolled in her Public History course set out to begin that important process. Public history as a discipline focuses on how history is presented beyond academia, and how people interact with it outside of a lecture hall. Throughout the semester, the class has critically explored the influence that public historians have on how history is interpreted.

For their capstone project, they formed six groups and were tasked with imagining a public history exhibit recognizing both Robin Mingo and Mingo Beach. Mingo has no known portraits, so a monument in his likeness is out of the question, but the project budget and mediums for expression are limitless. At the semester’s end, each group submitted a hypothetical grant proposal for the National Endowment for the Humanities.

“Essentially, they’re proposing an ethically appropriate way to commemorate Mingo and his legacy and to acknowledge the history of slavery in the North Shore,” said Matelski.

The students’ excitement for the challenge has been evident in the creativity of the proposals. Ideas include a heritage trail or historic walk with signage and an accompanying phone app to make the information accessible even to those who cannot get to the beach. 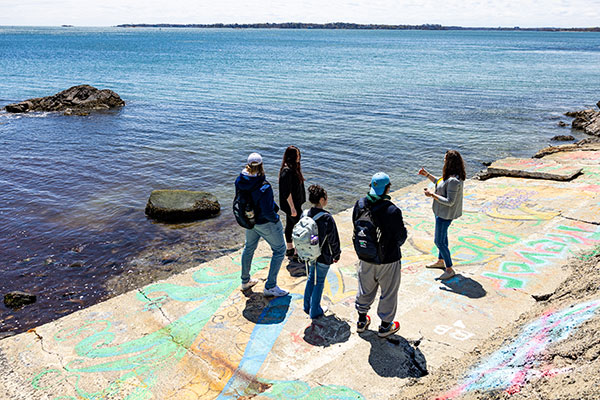 “One group wants to have a mini schooner that would go out to Black Rock and would also visit other sites of historical importance along the North Shore,” Matelski says. (“Black Rock” is just off the coast of Mingo Beach; Aunt Becky’s Hedge/Ledge are smaller rocks off the shoreline that you can see when the tide is low.)

The exercise is far from theoretical. Matelski and other humanities faculty are collaborating with the Office of Diversity, Equity, Inclusion, & Belonging to formally recognize Mingo Beach’s history.

But even before Mingo was forced to labor along its shores, the land belonged to indigenous peoples. The faculty group’s first task is to instill a land acknowledgment and create signage on Mingo Beach.

As the recently announced inaugural Tadler Center Fellow, Matelski will soon have time to comb the archives at the Beverly Historical Society. Beginning with a sabbatical in the fall of 2022, she will start the research needed to form a book-length picture of the man the beach is named after, his family, and the historical context of love, hate, slavery, and abolitionism, which Mingo encountered over the arc his lifetime.

She won’t stop sifting until she finds out “about the myth that was created after Robin Mingo’s death that explains the name and history of the beach.”