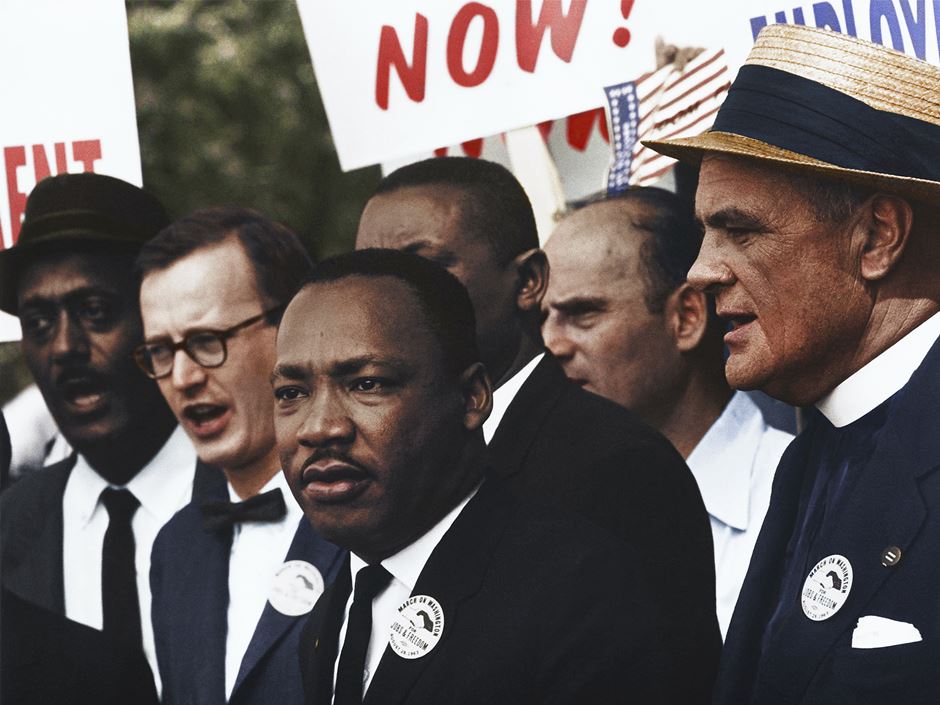 To honor Martin Luther King Jr. Day in 2022, a group of Endicott College scholars and officials reflect on King’s life, his unfinished mission, and the ways his legacy still reverberates in today’s divided world.
By: By Sarah Sweeney

It’s been more than five decades since Martin Luther King Jr.’s assassination in Memphis, Tenn., stunned a nation already in turmoil. That was 1968, but, in many ways, the country faces the same challenges now as it did then.

The U.S. is still grappling with the racism and racial violence, inequality, and voter disenfranchisement that King devoted his life toward combating, serving as a prominent leader and activist in the civil rights movement and fronting a more than decade long campaign of nonviolent resistance, civil disobedience, and galvanizing speeches. In 1964, he was recognized with the Nobel Peace Prize for his work.

To honor Martin Luther King Jr. Day in 2022, we asked a group of Endicott College scholars and officials to reflect on King’s life, his unfinished mission, and the ways his legacy still reverberates in today’s divided world.

It is bold, courageous, and necessary work for us all to continue our collective fight for equality, and as Dr. King himself said, we have a moral obligation to do so. Our country is still a divided nation, and there is much work to be done, but I am inspired, every day, by our students who, through their community efforts, academics, and personal lives, understand what Dr. King called “the fierce urgency of now.”

“We must accept finite disappointment, but never lose infinite hope,” Dr. King said in 1968, two months before he was assassinated. Words of tenacity, strength, and resilience—a reminder that we are on this journey together and to never give up. Words that I live by as I strive to instill hope in the people around me.

Martin Luther King’s greatest legacy is, of course, as a crusader for civil rights and human freedom. But as an English teacher, I think we also have a lot to learn from him as a writer and orator. My first sustained experience of Dr. King’s voice came when I read his “Letter from a Birmingham Jail” in a college writing class.

Dr. King wrote the letter from the jail cell in which he was doing time for participating in nonviolent protest, in response to an open statement by eight white clergymen in the midst of his Birmingham campaign and published in a local newspaper. Though they sympathized with King’s goals, the clergymen urged him to adopt less “extreme” tactics—to entrust the struggle for equality to the courts, political negotiations, and time.

King’s response is a masterful example of how powerful good writing can be, and it’s all the more remarkable given that he wrote it in the margins of the newspaper itself and on whatever scraps of paper he could get his hands on. On rereading it recently, I was struck by the way he tries to hear and respond to the objections of his audience. Throughout the letter, King uses phrases like, “You may well ask…” and “This may sound…” It’s as though he’s trying not just to write a response to his critics but also to imagine them in the room with him and to respond to their response.

Given the political polarization of social media and cable television today, it’s unlikely that Americans who disagree are even watching the same channel, much less sitting in the same room. Some commentators have proposed that we find news coverage from beyond our own “bubble” in order to understand perspectives that diverge from our own. But King’s example suggests that it’s not enough to sample or spy on alternate perspectives; we also have to write with and for them—to embrace writing as an act of empathy in which we inhabit, articulate, and only then respond to the voices of the opposition. To help our students do that would be to carry forward a part of Dr. King’s legacy that seems more urgent now than ever.

Dr. King’s legacy resonates today because, as a society, we need to be constantly mindful of the human tendency to fear people and practices that seem “different.” Endicott has afforded me many opportunities to travel abroad. I have been fortunate to be supported in my research with colleagues from numerous different countries and different disciplinary backgrounds.

Collaborating with diverse research teams requires me to view issues from multiple perspectives. In turn, these experiences have shaped me to be more comfortable and less judgmental when I encounter different ways of being. I encourage every Endicott student to try a foreign language course, take a religion course, or study abroad. If it feels uncomfortable, that’s great! Learning and personal growth happen outside of one’s comfort zone.

Dr. King’s legacy continues to impact modern scholarship, activism, and social rights in our daily lives. From grassroots movements like Black Lives Matter to civic groups like the ACLU, Dr. King’s wish for equity continues to impact the way we think about race and justice. As a student and researcher of identity politics, the civil rights movement and Dr. King’s leadership paved the way for Black identity politics. Dr. King highlighted the inequalities, not only in the criminal justice system here in the U.S., but also about the oppressive conditions that existed in the form of segregation. Dr. King challenged the notion of “… and justice for all” by making America face its own caste system that historically incarcerates and mistreats African Americans.

As a woman of color, Dr. King’s fight for voting, education, and housing rights has positively impacted by ability to maneuver in my own skin. Apart from his fight in the civil rights movement, Dr. King serves a role model as a Black male that was able to obtain a Ph.D. as a proud graduate of an Historically Black College and University (HBCU) and as a proud member of the first fraternity founded for men of color (Alpha Phi Alpha). Dr. King was a trailblazer not only in the civil rights movement but as a person of color that was able to expand beyond the societal limitations of his time. The circumstances surrounding and those involved in his assassination on April 4, 1968, are still contested.

On MLK Day, we dust off our favorite Martin Luther King Jr. quotes: “Darkness cannot drive out darkness; only light can do that. Hate cannot drive out hate; only love can do that.” “The time is always right to do what is right.” “I have decided to stick with love. Hate is too great a burden to bear.”

In the 50 years since his assassination, we have sanitized Dr. King. We have forgotten that the same language some use today to describe contemporary Black activists—unpatriotic, troublemaker, communist, menace to society—was also applied to King in the 1960s.

The word “nonviolence” has become irrevocably linked with Dr. King, but we have erased the second half of his strategy: Nonviolent direct action. Systemic racism would not be defeated by pretty speeches. Dr. King didn’t just stand on the sidelines and preach about unity and love. He got in people’s faces and dared them to strike first.

I teach King’s “Letter from Birmingham Jail” almost every year and it never fails to move me, though I have read it countless times. In the past few years, it has seemed particularly urgent. In class, we talk about King’s definitions of civil disobedience and justice.

During the backlash against Black Lives Matter and George Floyd protests, King’s criticism of “white moderates” who are “more devoted to ‘order’ than justice,” jumped off the page. Students are also moved by his definition of a moral code that transcends human law.

We often discuss the passage where King points out that what Hitler did in Germany was perfectly “legal” and how that applies to America’s history of racism, from segregation to redlining. I look forward to getting back to class so we can talk about why King would be leading the charge for the voting rights bill.