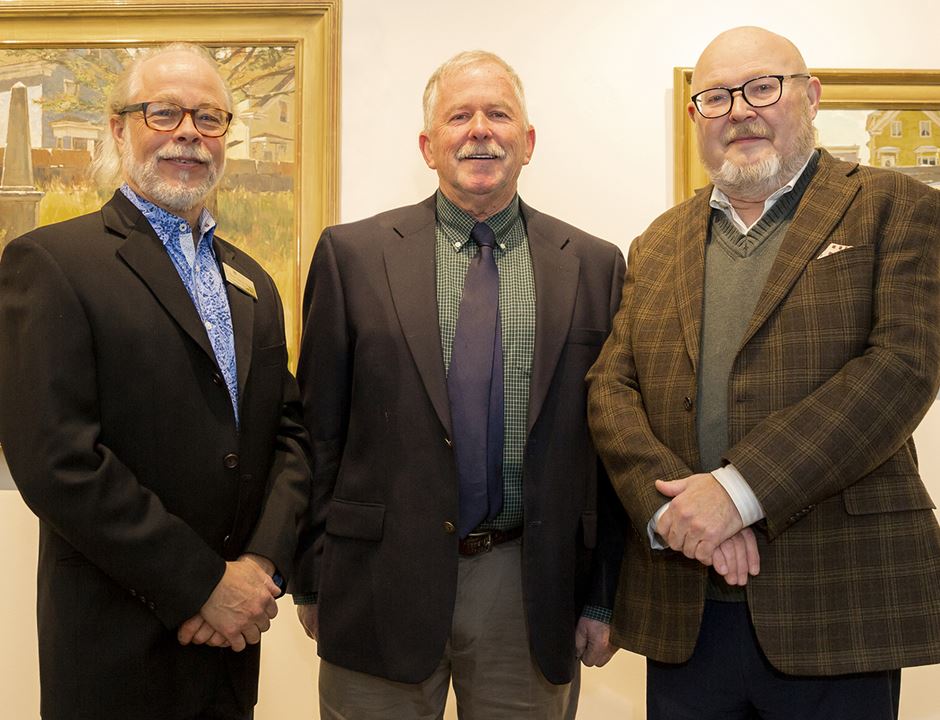 On Wednesday night, Endicott College School of Visual & Performing Arts and the Endicott community had the distinct pleasure of hosting a reception for Jeff Weaver: Transcending the Familiar.

On Wednesday night, Endicott College School of Visual & Performing Arts and the Endicott community had the distinct pleasure of hosting a reception at the Walter J. Manninen Center for the Arts in the Heftler Visiting Artist Gallery for renowned, local artist Jeff Weaver’s work. The exhibition, titled Jeff Weaver: Transcending the Familiar, was aptly named.

If you are unaware of Weaver’s work, know that he is first of all a lover of beauty, but not necessarily of the typical variety. Weaver works in the American Realist style and you will not find florals or Aphrodite among his strokes, but you will see something truly lovely in each piece.

Weaver says, “I choose my subjects as often from the commonplace as from the inherently picturesque, looking for that which reveals the city’s true personality. I enjoy the challenge of finding visual interest in scenes which ordinarily go unnoticed.” 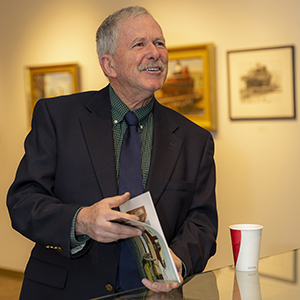 His work runs the gamut from fishermen and boats, reminiscent of Winslow Homer, to rundown wharfs and factories. A perfect example of his ability to find beauty is Factory on Pavilion Beach. This setting is not special. It’s an everyday factory, but Weaver broke it down to simplistic shapes, bringing out its character and highlighting the way light plays across it. The mastery was honed through years of training, but is also a testament to how he sees.

While he was raised in Framingham, Mass., Weaver chose to move to Gloucester, Mass., in 1972 and has found constant inspiration there ever since. He has been painting the same setting for over 40 years and has yet to run out of ideas. In fact, he even has his own studio/gallery located at 16 Rogers Street where he showcases them (when he isn’t showing at Endicott).

The show was a collaborative effort. Many pieces were loaned by the artist, while others were contributed by major collector and Endicott benefactor Walter J. Manninen. The artist and Manninen were instrumental in assembling this major artistic overview. Our community is thrilled to have such a comprehensive group of lauded work on campus.

Endicott Program Assistant, Elizabeth Bollenberg says, “As a Gloucester native, I appreciate how Weaver’s work conveys the community as one that is steeped in shuffled layers of history, a place that is somehow in constant, yet subtle transition with the incorporation of both structure and sea.”

Endicott College Dean of Visual & Performing Arts, Mark Towner says, “I particularly like the quiet spaces in and around the buildings and the streets that allow my mind to generate stories, histories, even mythologies about the rich histories inherent in this fishing community. Ambiance and emotional texture complement the qualitative depth of paint and brushstroke.”

This exhibition was of particular importance to our academic community as it was directly impacted by our students. Recently, Manninen—collector, benefactor, and entrepreneur—gave insight to students in one of their classes on how to build, maintain, and share a collection. During the same class, students were empowered to help choose a piece of Weaver’s work to become a part of the Endicott collection. 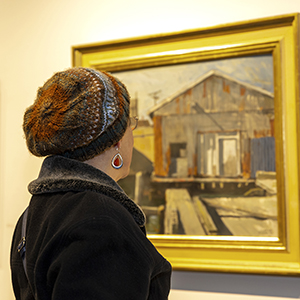 A patron enjoying the artwork from Jeff Weaver:
Transcending the Familiar. While many votes were cast, both works, Yellow House and Demolition II were ultimately chosen because of Manninen’s continued generosity toward the College. On Wednesday, both works hung proudly among the others, showcasing the very real impact students and donors make on our daily experience.

Manninen says, “Part of my thinking was that the work was to be for the students. It was a condition that it would be used for educational purposes when I put together my trust. This building and gallery really emphasize the talented students. It features accomplished artists and allows students to learn from them and parallel them.

“I always look for a reason to acquire art and a Weaver exhibition was coming up, so I went to his studio poking around and narrowed it down to a couple of pieces. I couldn’t make up my mind because they both really grabbed me, so I brought them to a class to let them decide on an acquisition. The vote was something like 12-5, and the winning painting was Demolition II, so I said ‘okay, that’s the new painting for the Endicott College collection.’ However, after class we were outside chitchatting with the students and one of them said ‘you’re going to get both of them aren’t you?’ They really tuned into what I’m about and they did in fact get both.”

Towner says, “It was a perfect learning opportunity to meet real people who are real professionals with real stories. They not only listened to a story, but were able to become involved in it. Experiential learning at its best.”

If you missed the reception, there is still plenty of time to go see the show itself, which opened on November 5, 2019 and will close on March 2, 2020. As always, we would like to remind the public that you are more than welcome to experience our campus, our lives, and our art exhibitions. Come explore.