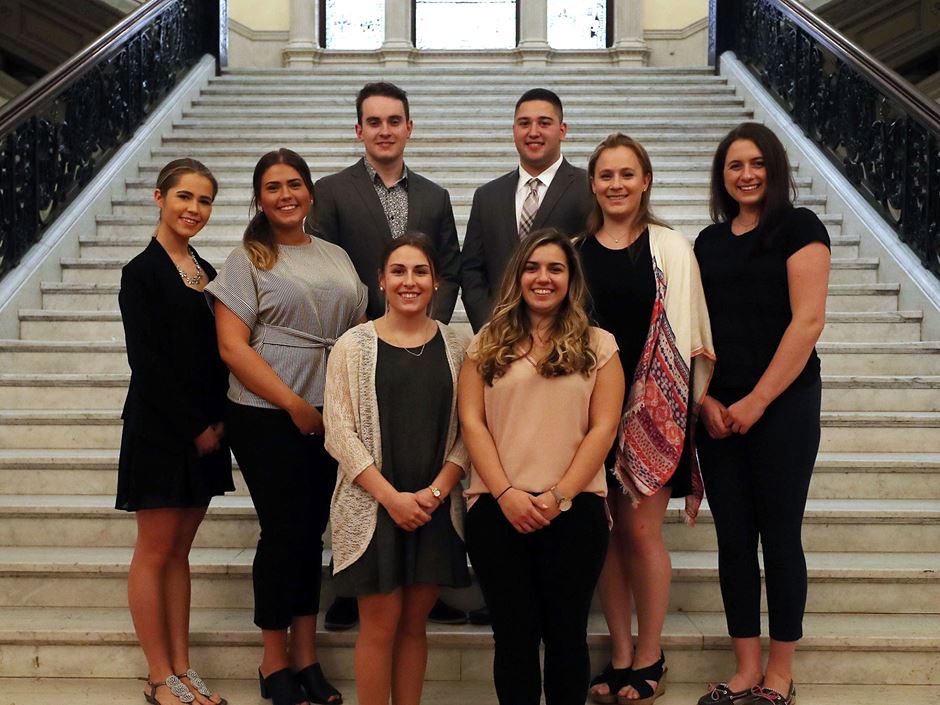 Students joined the national conversation and brought their public health campaigns to the State House.

Juniors and seniors from this past semester’s Campaign Planning course took their ideas to the Massachusetts’s State House. It was there that they let their voices be heard on a crisis that’s—bit by bit—taking lives across the nation: the opioid crisis.

“This is probably one of the most important issues geographically because of where we are, but also demographically for our students,” said Associate Professor Sara Johnson Allen who teaches the course.

The service learning component to the class has always been an opportunity for Allen to bring in real “clients” to partner with students and create a marketing campaign that solves a problem. This year, her sixth year teaching the course, instead of bringing in an actual client, Allen was compelled to have her students step into the national conversation concerning the opioid crisis.

The class culminated with a public health campaign focused on the crisis, which students presented to Massachusetts’s State House staff. Those in attendance were Jason Silva, chief of staff to Senator Joan B. Lovely along with other aides from Lovely's office as well as the offices of Senate Minority Leader Bruce E. Tarr and Representative Brad R. Hill. Ellen Fleming, Endicott College class of 2014, was also in attendance as the media director and legislative aide to Senator John F. Keenan.

Students in the class were separated into groups and tasked with creating unique public health campaigns that aimed to combat certain aspects of the crisis. Some focused on preventing addiction while others honed in on things like relapse as a reality and the power caregivers have in making decisions about handling prescriptions.

Before heading to the State House, the students had the opportunity to have a practice run of sorts at CTP Boston, a Boston-based advertising, media, and digital agency, where they were able to pitch their campaigns to CTP employees in exchange for real-world feedback.

The course could have stopped there, but Allen said, “Let’s take this to the State House and let our voices be heard.” She says the research the class has done collectively proves that this is an issue that can’t be ignored. “The opioid crisis is being fueled by factors that are not necessarily present with other substance abuse issues. For example, pharmaceutical companies driven by profit, overprescribing by some physicians, the potency of pain killers, and a lack of understanding that opioid addiction can happen to anyone,” Allen says of the spiked rise in opioid addiction.

Michelle Lorenti, a student in the course says that the work her team put into this campaign has real reach and her classmates’ pitches were well-received, “It feels great because we are able to talk about a real issue and potentially help someone who is affected by the opioid epidemic.”

Students are happy to have had this real-world experience. “It feels really cool to work on something so hard all semester and be able to realize the potential impact it may have outside of the classroom surrounding a national issue,” said Dynnea Bezona.

Though it’s powerful because it brings the opportunity to make a difference and be part of national change, the authentic experience of pitching to real-world clients is powerful all on its own—regardless of the content.

“This opens students up to the potential of pursuing non-profit marketing or in-house marketing for organizations. It’s an entirely new field they may not have thought of before. Now, they can go into an interview and explain this real-life problem that they presented to a real-life client,” explained Allen.

At Endicott, we know how valuable experiential learning can be. And—once again—this course supports that notion. Allen shared that this final project almost always gets students their senior internship or even their job post-graduation. She said, “It’s not just the work. It’s the process that they are able to describe.”

Lorenti agreed, saying that, “Having real-world relevancy prepares us for the future and creates some great things to add to our resume.”

Learn more about other opportunities for real-world learning in Endicott's School of Communication.