When Ryan Curley ’23 signed up for the MTU-Angle Innovation Challenge, a 10-week international business competition, he didn’t realize he’d be tasked with such an unusual business problem. Or that he’d win for Best Technical Solution.
By: Danna Lorch

Ryan Curley ’23 is so driven that he dragged himself out of bed at 5:45 a.m. over winter break to log onto Zoom with fellow student innovators at Munster Technological University (MTU) in Cork, Ireland.

“It’s part of international business,” he said. “We are all going to have to get used to taking meetings that aren’t in our ideal time zones because we have business partners or clients abroad. America is just a small fraction of the market.”

Curley, along with over 100 other undergraduate and postgraduate students from MTU and Endicott, took part in the 10-week MTU-Angle Innovation Challenge, an international business competition.

They were grouped into 11 different multidisciplinary teams and tasked with solving real-world challenges for stakeholders, including multi-national corporations, charities, and small to medium-sized companies in the Munster region of Ireland. Some of the participating clients included Pepsi, the Irish Navy, Boston Scientific, and Autism Assistance Dogs Ireland.

“I hoped it wouldn’t just look good on a resume, but it would actually teach me something that I wouldn’t get in the classroom,” Curley said. An active member of Endicott’s FUEL Club, he recently co-founded Launch Partners, a marketing startup, in partnership with Nik Kasprzak ’23. 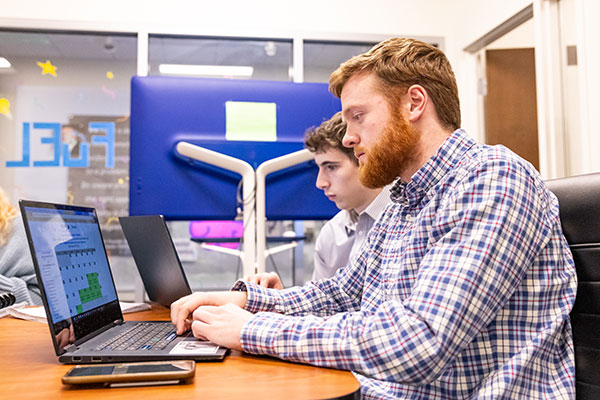 But despite Curley’s roster of professional experiences, his mentor Gina Deschamps, the Executive Director of the Colin and Erika Angle Center for Entrepreneurship, urged him and other FUEL members to gain a background in international business before graduation.

The participating Endicott students were challenged to put their education and skills to the test in the real world in the best way possible. With no engineering background whatsoever, Curley, an entrepreneurship and marketing double major, admitted that he was pushed far out of his comfort zone.

Curley was the only American assigned to serve the Crann Centre, a charity supporting people living with neuro-physical disabilities in Ireland; his teammates were all MTU students in mechanical engineering or biomedical engineering majors.

“In the beginning, I didn’t know what I had to add,” he said.

The team was tasked with conceiving a way to improve the continence process of people the Crann Centre serves, so they can attain a better quality of life and improve their dignity. Most use wheelchairs and need a more discreet way to manage their catheters in the workplace.

Curley admitted that he was initially disappointed to not be assigned a more glamorous project.

“The Irish Navy and Pepsi were involved—obviously that was a cool and flashy thing. At first, I didn’t fully understand the importance of it. Then, once we started to dive in, I realized there are so many people being affected by this issue,” he said.

He dug deep, suggesting two different ideas. Curley’s colleagues ran with one of the options—the details of which can’t be shared yet publicly because the design is currently in prototype mode and might be commercially produced for wide use in Europe.

Curley also drew on his marketing skills to design a chameleon logo for the product’s branding and to translate his teammates’ technical process into a PowerPoint presentation for the challenge’s judges and Crann Centre leadership to review.

He was shocked to learn that his team won the award for Best Technical Solution. “It was just so great to see all our skills come together like this,” he said.

Carole O’Leary, Project Manager at MTU’s Innovation & Enterprise Office, agreed. Though this was the third year of the challenge, she noted, it’s the first time MTU has partnered with Endicott to make the competition an exercise in business relations across the pond.

“There was a pre-existing relationship with Endicott through study abroad programming and I have worked with the Angle Center to judge Spark Tank in the past as well,” she said.

One participating Endicott student, Charles Arinello ’23, was studying abroad in Cork and taking courses at MTU throughout the Innovation Challenge. He had the unique experience of working on a team from Ireland that included his classmate and president of the Endicott Marketing Club Jessica Mollin ’23, back in Beverly.

Their client was Clearstream, a player in the financial services industry. “The goal of our research was to understand why Clearstream was experiencing a higher turnover rate than they would like, as well as the factors that are leading to the great resignation occurring worldwide,” Mollin said.

Arinello, a business administration and management major, has taken quite a few human resources management and operational management courses and appreciated the chance to put theory into practice by creating surveys for employees and graduate students and supporting Mollin in running focus groups.

“We just started doing more research and survey work in my last semester at Endicott,” he said. “I went straight from doing it as an in-class assignment to doing it for a real company, and I thought that was a great utilization of what we learned at school.”

Along the way, all but two of the Clearstream team’s members dropped off for personal reasons, but Arinello is proud of finishing out the challenge with Mollin. It was a demanding yet rewarding experience he will be referencing during senior year job interviews.

Deschamps was also thrilled with the results of the Innovation Challenge and envisions this becoming a popular annual event for the Angle Center and wider Endicott entrepreneurial community.

And for those wanting to flex their business-building muscles before next year, the College’s annual business competition, Spark Tank 2022, is just around the corner on April 14.