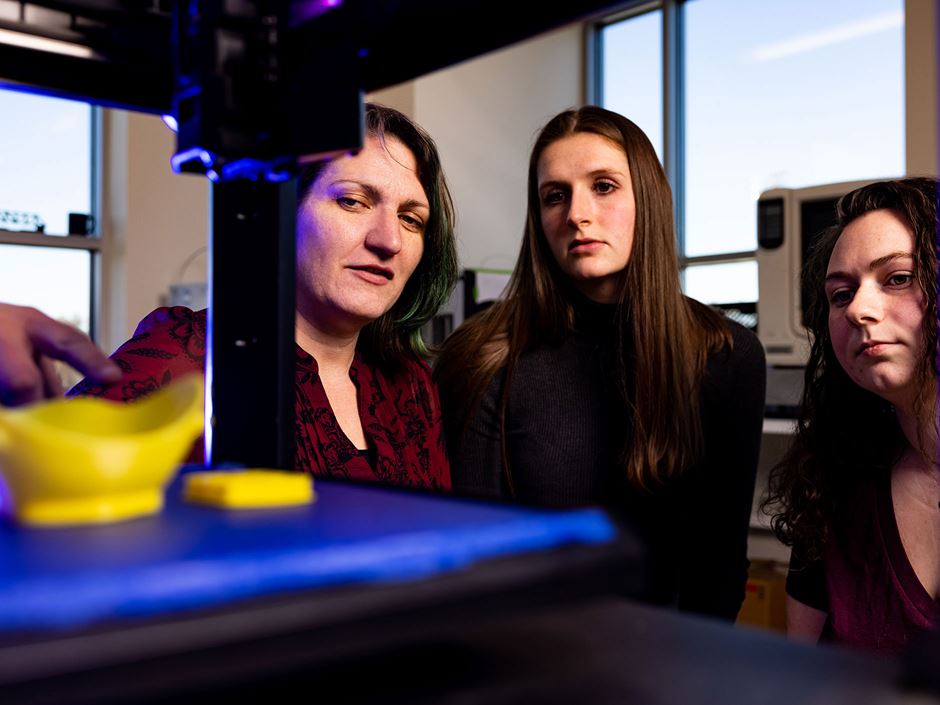 Endicott College’s engineering program may be new, but as the first cohort prepares to graduate, the program and its female faculty have already proven to be game changers for women in STEM.
By: Sarah Sweeney

When Julia Cavanaugh ’23 was a kid, she used to take her toys apart, finding more joy in the process of disassembling and reassembling than playing with them.

Cavanaugh has always questioned how objects work—how parts work within a whole, what makes objects move, and how an object is pieced together in the first place.

“I remember building Legos the most as a kid, and if my mom gave me a Barbie, I would just take it apart and try to put it back together,” she said.

At 15, Cavanaugh began working for Camp No Limits, a summer camp for children with limb loss and limb disabilities.

“It’s a place where they can have a true camp experience and where disabilities weren’t present and didn’t set them apart,” she said. 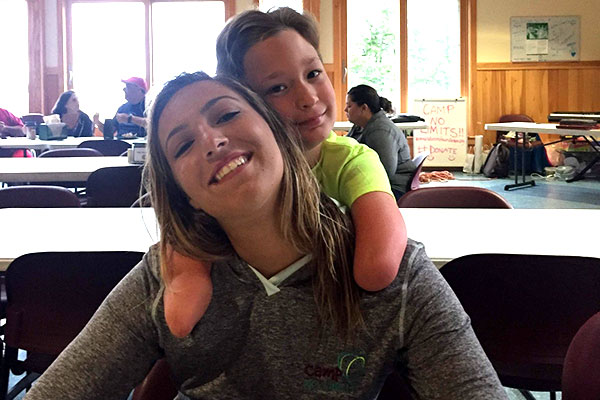 While there, Cavanaugh worked with prosthetics and prosthetists. “I was fascinated by how they work and the amazing technologies biomedical engineering has to offer,” she recalled. “This sparked a love for bioengineering and engineering as a whole.”

She returned to the camp throughout high school, furthering her love of both engineering and helping others. When it came time to apply to colleges, she felt drawn to the College after her brother, an Endicott alum and now a civil engineer, spoke highly of the school.

“And when I heard they’d just created an engineering program, I thought it would be a perfect fit,” she said.

Established in fall 2018, Endicott’s engineering program will graduate its first cohort this spring, including Morgan Bresnahan ’22 who, along with Cavanaugh, is part of a growing number of women in STEM.

“I thought it was huge having some of my first engineering professors be female,” said Bresnahan of joining the program.

“When I was growing up, there was little to no opportunity for women,” said Nelson.

She remembers wanting to sign up for a CAD (computer-aided design) class and being told it was full. “The teacher was a football coach and the class went to his football players,” she said.

But as more and more women enter traditionally male-dominated STEM fields, the tide is very much turning. Just this year, Cavanaugh helped establish an Endicott affiliate of the national Society of Women Engineers (SWE) organization to ensure a legacy for women students to come. 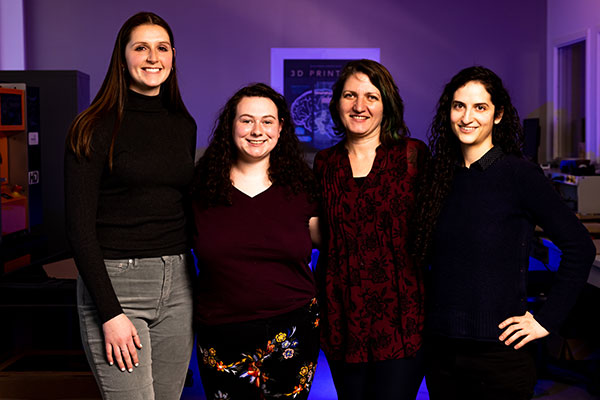 “Even from the time I entered the field to the past five years has drastically changed,” said Nelson, who has a background in electrical engineering and has worked for industry heavy-hitters like Raytheon. “Now, women have aged into positions of power and are allies.”

“In our SWE affiliate, not only is membership open to males, but we recruit male students. What women have done for one another as far as professional development is not exclusive to women,” she said. “Men need to recognize that their job is to also be an ally. So, if you’re part of the majority in your workspace, just have your eyes open to minorities, because it might not be women anymore.”

Perhaps there’s no better ally than John “Jack” Duggan, Associate Dean of Science and Technology and Chair of Engineering, Computer Science, and Mathematics.

“In engineering, 50% of the faculty are women here, so students get the immediate sense that it’s not the old boys’ club,” said Duggan. “Plus, Endicott is something like 63% women—what a great place for an engineering program with top-notch faculty and facilities to change the dynamics of gender and engineering.”

Tinkering in the makerspace

Cavanaugh, Bresnahan, and Grace Davidson ’23 often find themselves at the makerspace, where they recently helped demonstrate how to create custom engraved coasters using recycled 3D printing filament as part of the Campus Race to Zero Waste sustainability challenge.

“I come here once a day,” said Davidson who, along with Cavanaugh, will be two women engineering students graduating in the Class of 2023. “I really like to show people how to do something and show them the steps to take. Even when it comes to CAD and 3D printing, the boys ask me for help.” 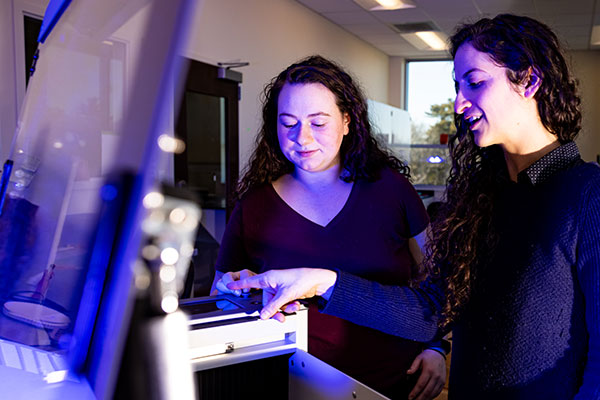 Under Nelson’s leadership, the makerspace has grown—not only in the number of students it serves, but its mission, which also includes sustainability and being inclusive of the whole Endicott community, not just engineering.

One of Cavanaugh’s recent tasks was melting down 3D printing waste and turning it back into PLA filament to reuse in the space’s 3D printers. “Our goal was to have a zero-waste makerspace and begin reducing the waste that the engineering department produces,” Cavanaugh said.

Nelson said she’s working toward creating a makerspace that’s not only functional but encouraging and welcoming to students of all backgrounds.

“Last semester, there were a lot fewer students who knew this place existed. And then this semester, we’ve had to add two sections of ERG 150—a class taught in the makerspace using the makerspace tools,” she said. “Now I get students coming in and asking for help on projects or wanting to do personal projects. That’s a good thing to see as we continue to grow.”

Still, due to the way women are conditioned in our society, they are far more likely to be people pleasers and perfectionists than men. So, for Ventura and Nelson, granting students permission to fail is key, with the makerspace playing an important role in helping female students get comfortable with risk and different outcomes.

“I also think that having a lot of female professors is very encouraging and helpful,” added Davidson. “That’s a big reason that I studied engineering because there aren’t enough women doing it yet.”

An eye on the future

Duggan is excited about the future of engineering at Endicott.

“What I love about this place is its location, its tradition of success, and it’s a liberal arts school that’s a safe, healthy campus for all kinds of students with all kinds of backgrounds, interests, and skill-sets and we have all these athletes,” he said. “A student can get an engineering degree and pursue those other aspects of college life.”

Endicott does have a large number of athletes, and in engineering, that’s a plus. “They fit right in with our teamwork and project-based approach in the classroom,” he said. “We’re all in it together, to support each other to find success.”

That culture is what Duggan hopes will draw more female engineers to the program.

“Even now with our graduates, their notion of the status quo is the culture here,” he said. “Now, they’re bringing that influence to their workplace.”

While there aren’t many engineering programs on the North Shore, said Duggan, there is a demand for engineers.

“We see that with the demand for internships,” he said. “So, we’re fulfilling a community need by offering this program. Employers tell me, ‘We’d hire women and underserved populations if you had the graduates.’ Now we’re helping them by creating this supportive engineering culture that, I would say, is aimed at success and results, and not cutthroat competition.”

Now, with the countdown on to Commencement, Bresnahan is leaning toward graduate school for engineering.

Graduation is still a year off for Davidson, who is considering going into teaching, and Cavanaugh, who hopes for another fall internship in Cork, Ireland, where she interned in 2021 as a mechanical engineer at Munster Technological University.

“As an engineer, my career goal is to create a legacy, by making a difference in helping others by innovating and advancing the engineering world,” said Cavanaugh. “I want to create technologies and systems that will help everyone, while also creating a name for myself and proving preconceived notions about women in engineering wrong.”