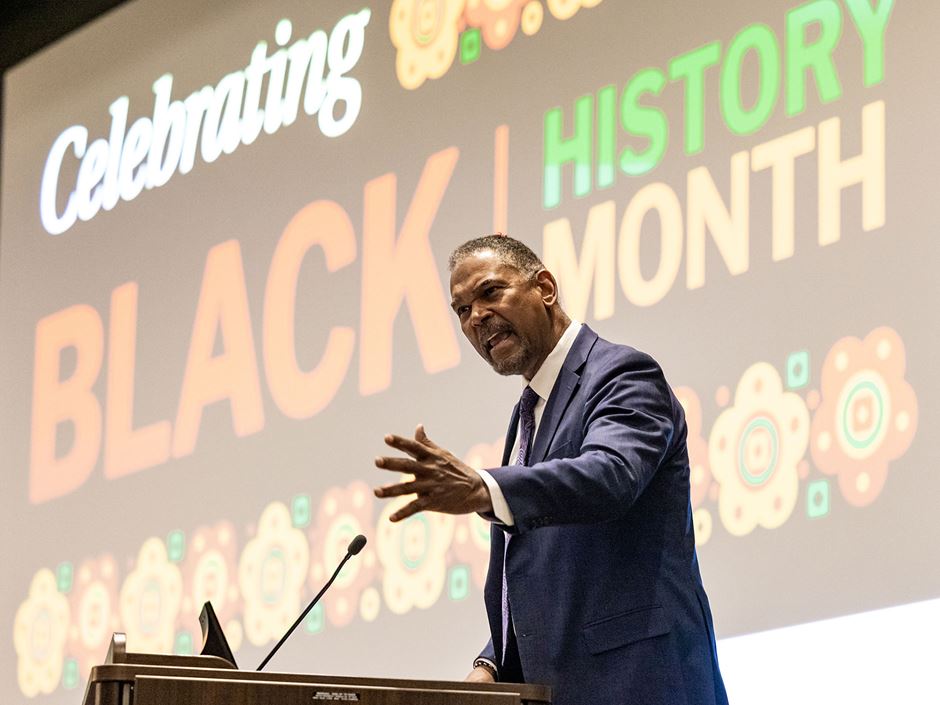 Endicott capped its celebration of Black History Month with a campuswide expo and an award ceremony featuring Eddie Jenkins, a prominent Boston attorney and a member of the 1972 Superbowl champion Miami Dolphins.
By: Sarah Sweeney

Endicott College capped its celebration of Black History Month yesterday with a campuswide expo and an award ceremony featuring Eddie Jenkins, a prominent Boston attorney and a member of the 1972 Superbowl champion Miami Dolphins.

The daylong expo was a dazzling finale to a month that featured several high-profile campus events including a screening of A Reckoning in Boston with the filmmaker and a visit from the “free hugs guy” Ken Nwadike Jr.

Featuring more than 80 displays set up around campus, the expo saw the entire Endicott community come together to highlight and celebrate the contributions of Black people throughout American history.

Working with Amanda Shilo, assistant professor of nursing and chair of the nursing DEI committee, Emer Lindsay ’24 and Ana Collins ’24 helmed a project called “The Past Echoes in the Present: The Impact of Unethical Research History.” The exhibit explored unethical research throughout history—from the Tuskegee syphilis study to Henrietta Lacks, the Black woman behind the first immortalized cell line—and how it still resonates today.

“We’re giving two examples out of many about unethical research in the past and the history of Black people and how they were exploited,” explained Collins. “The other half of the exhibit talks about how that history has affected Black people today, including with the COVID vaccine and distrust of the healthcare system.”

Lindsay said she’d heard of the Henrietta Lacks case, “but I don’t think I realized how much her cells impacted scientific research back then and even now, with polio and the HIV vaccine,” she said.

Emily Augeri ’22 worked on another project with Shilo called “African Americans at the Heart of Nursing History.”

“There was a lot of information I never knew before,” said Augeri. “It was interesting to see nurses working during a time when there was segregated seating to now, when the current president of the National League for Nursing is a Black woman.”

At the afternoon awards ceremony inside the Cleary Lecture Hall, Vice President and Chief Diversity Officer Brandi Johnson applauded the participation of the Endicott community.

“Today was something. I was awestruck by the amount of projects throughout campus,” she said. “At a time when some are trying to suppress the sharing of Black history in our country, we are demonstrating our commitment to improve by understanding history and the issues that prevail.”

Throughout the day, Johnson explored the projects with Endicott President Steven R. DiSalvo, Ph.D., who called it “an educational experience.”

DiSalvo commended the community for continuing to engage and have difficult conversations. “It’s not just about talking the talk but walking the walk, and that was the beauty of today,” he said.

The Endicott Singers treated the crowd to a rendition of "Lift Every Voice and Sing" and Rev. Dr. Gail Cantor, director of Spiritual Life and co-chair of the DEIB talk force, bestowed awards in four areas: creative, most relevant, best presentation, and an overall winner. 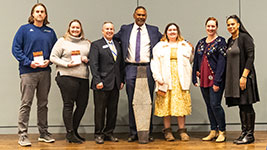 Miriam Fenster ’25 won most creative exhibit while the most relevant exhibit went to the Endicott Center for Teaching and Learning. Best presentation was awarded to Endicott Athletics and Recreation and the overall best exhibit went to Communication Professor Sara Allen’s Creative Portfolio Development Class (CMM 415) for its installation inside the WAX building.

“I’ve never seen anything like it today,” Cantor said. “I learned an enormous amount. Everyone won if you learned something new.”

But the highlight of the ceremony was the galvanizing talk by Jenkins.

“I came here to challenge your assumptions about the bedrock of American history,” he told the rapt crowd. Discussing everything from the wealth disparity and reparations to George Floyd and the COVID-19 pandemic, Jenkins said it was his duty to get into what the late activist and Representative John Lewis called “good trouble.”

“We have to be honest with ourselves, have a give and take, and ask questions,” Jenkins said.

Born in the south, Jenkins said he experienced segregation and “whites only” signage growing up. Later, he pursued that good trouble by marching against the Vietnam war and even turning down a full scholarship after witnessing injustice at the school.

“We are undergoing change in America and you must recognize what your role will be,” he said. “It’s now your turn. And it’s time to swim together or drown. I’m waiting on you.”