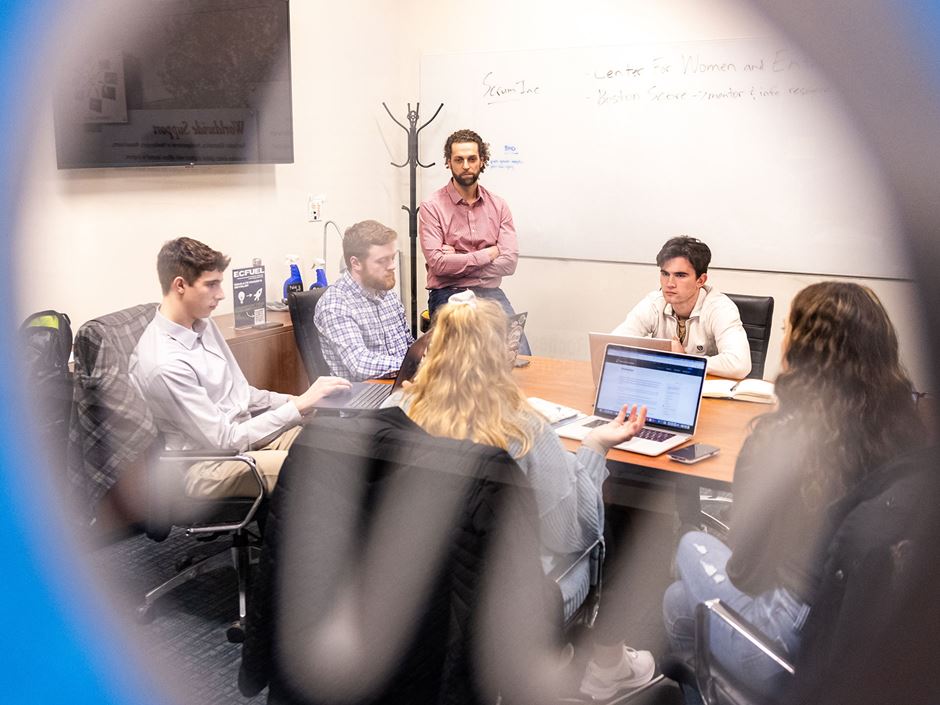 From bakers to creative risktakers, the Colin and Erika Angle Center for Entrepreneurship is nurturing a new cadre of young entrepreneurs at Endicott.
By: Danna Lorch

In high school, Amanda Drager ’24 informally sold $1 cupcakes to classmates. But at Endicott, she had kneaded her hobby into an income-generating small business.

“When I was young and I wanted something really badly I’d always say, ‘Please, mom, with sugar on top,’” Drager recalled. It made perfect sense to name her start-up Sugar on Top Bakery.

She came to Endicott with a solopreneur’s focused mindset, already certain that she wanted to run her own bakery and be her own boss. 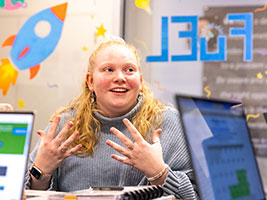 “After my first semester, I started figuring out how to make a pitch deck and slides and how to professionalize the business,” Drager explained. It was a skillset she learned from a course with Gina Deschamps, Executive Director of the Colin and Erika Angle Center for Entrepreneurship.

“Endicott students are coming up with business concepts that are literally blowing my doors off,” said Deschamps.

Entrepreneurship is not all frosting and sprinkles, though. Drager stretches to balance her coursework with fulfilling orders though she hasn’t had regular access to a kitchen this year. Even so, the College community has encouraged Sugar on Top Bakery’s success every step of the way.

An Endicott internship matched her with Claire Raposo, the 21-year-old owner of The Lost Lamb patisserie in Stockbridge, Mass., who mentored Drager on starting a brick-and-mortar space, a dream she’s intending to actualize upon graduation.

She also gained confidence in Rebecca Doyon’s Alchemy of Baking Class. “She is amazing and pushed me way out of my comfort zone beyond cupcakes,” said Drager, who mastered eclairs, a notoriously tricky pastry, for her final project.

Drager is an active member of the FUEL Club, where she first connected with Zach Servideo, founder of Value Creation Labs and the creator and host of Boston Business Journal’s “Boston Speaks Up” podcast. He also serves as Entrepreneur in Residence at the Angle Center. 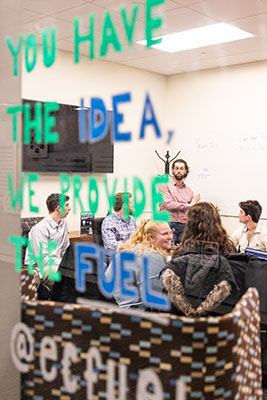 Students rightfully interpret Servideo’s man-bun and baseball cap as proof that you don’t have to leave any part of yourself at home to succeed in the start-up world. He moderates an entrepreneurship club Slack channel and holds weekly office hours where students can sign up to discuss their business ideas, hear about the corporate and start-up worlds, or seek career advice.

Servideo also attends the weekly FUEL club meeting. “I wish you could feel the good energy in that room,” he said.

Along with coaching Drager and other student entrepreneurs, Servideo has also been working with Ryan Curley ’23 and Nik Kasprzak ’23, co-founders of Launch Partners.

“Endicott College students are smart, savvy, and have a mindfulness about them,” Servideo said. “They understand that the world is rapidly changing and the principles you learn in entrepreneurship are transferable anywhere.”

He said that Curley and Kasprzak came in with impressive conviction to build their own creative services company: “Those dudes know exactly what they want,” he mused.

He has since helped them operationalize their business, register their LLC, and get set up with QuickBooks.

Curley and Kasprzak both have entrepreneurial roots and honed their dedication and drive as student athletes. They pounded out their business plan over 11 p.m. meetings, managed to get approval to intern at their own company, and have bootstrapped their start-up costs with money earned from working odd jobs.

In the past year, the duo completed marketing projects for clients from 10 different sectors including publishing, banking, and even tattooing, an approach Curley hopes will give their company a competitive edge. 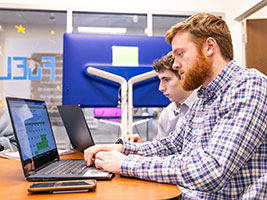 “We’re on the front end of creativity, experiencing new things in each industry, which maybe we can take and bring across to other industries that others wouldn’t,” Curley said.

Kasprzak believes some of their early success comes from the encouragement they’ve received from the Angle Center, the Internship & Career Center, and other members of the FUEL Club. “One of the more valuable things we’ll take away from here is the network that Endicott has provided,” he said. “A lot of people want to see us succeed.”

That support has given them the confidence to compete for a second year at Spark Tank, the College’s annual pitch competition loosely based around the hit TV show Shark Tank. Businesses will be judged by an expert panel and a winner will be awarded cash prizes to support the start-up. The event is sponsored by a generous donation from Cummings Foundation and TD Bank.

Determined to promote a culture of entrepreneurship that transcends the Curtis L. Gerrish School of Business, Deschamps encourages anyone with a great idea (including alumni) to submit a 10-minute video pitch by March 10.

“I want this to be a campus-wide initiative,” she said.