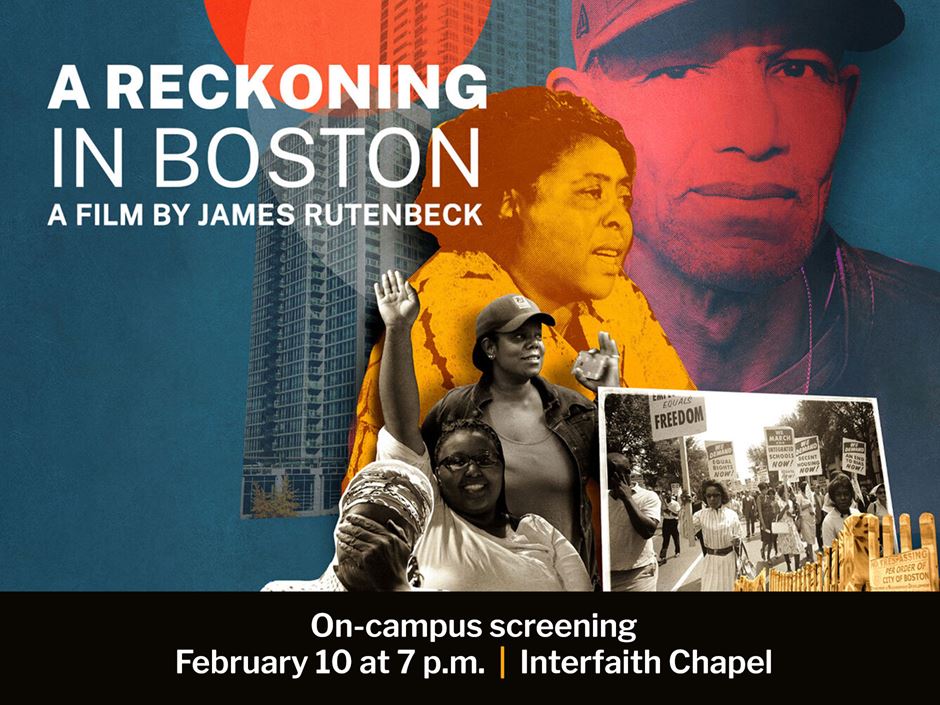 Ahead of the February 10 film screening on campus, A Reckoning in Boston director James Rutenbeck and co-producer Kafi Dixon discuss the making of their documentary about racial inequality in Boston.
By: Erin Hatch & Rachel Fleming

On February 10, Endicott will host a screening of the documentary A Reckoning in Boston as part of Black History Month programming. Originally envisioned as a film about the transformative impact of humanities education, Reckoning morphed into a look at political and social racial inequities in Boston that persist despite the city’s desire to be progressive.

After the screening, Director James Rutenbeck and Co-Producer Kafi Dixon will participate in a Q&A session with the audience. Tickets are free with an Endicott ID.

We chatted with Rutenbeck and Dixon ahead of their visit to campus. The conversation has been edited for length and clarity.

You originally set out to make a different film and then pivoted course. Can you talk about that?

JR: The original idea was to film this year long program called the Clemente Course in The Humanities and learn a bit about the students’ lives outside the classroom. Then I started spending more time with two students, Kafi Dixon and Carl Chandler, and they brought me into their lives. I realized that they were living in Boston in a particular moment that was presenting huge obstacles for them in terms of housing, education, and their very place in the city, so I started to see that that needed to be what the film was really about.

As a white man, were you scared or intimidated to make this movie?

JR: I am part of the privilege that is not experiencing or not even seeing a lot of the tough realities that people like Kafi and Carl face. Kafi very generously took me into some of those spaces. I think she was—in a calculated way and in a generous way at the same time—wanting me to see these things. It was a learning process.

What steps do you think Boston as a city needs to take to reconcile its history and move forward as the progressive community we claim to be?

KD: One of the things that Boston has done very well is forget its own history. In our rush to be seen as not just intellectuals but progressives, we’ve swept a lot of unresolved conversations about racial trauma under the rug. And we also create space for people to keep using racial violence as a tool against communities of color here in Boston.

What I do have hope for is that more young people decide to divest from situations, circumstances, and groups where there’s a clear and defined racial bias. To say that we’re better integrated, inclusive, and equitable.

Why do you think it’s important for young people to see this film and have these conversations?

KD: Throughout history, women have stood up and spoke about what it is to be uneducated, what it is to be on welfare, against violence towards communities and Black woman, regardless of whether it’s to our benefit or not to continue to stand up and back other people’s rights. What I ask of young people is to give back—give back to the older women who have fought for their rights, and there needs to come a time where we make sure that those women are protected and given ways to design safe spaces for themselves.

JR: If anyone's going to ultimately face Boston’s history, that leadership has to come from young people because there’s a whole generation or a few generations of Bostonians who’ve never wanted to deal with it.

How has the film changed your perspective of Boston?

JR: I used to see development in Boston and think that the city is prospering, it’s growing, there’s good things happening. And now, when I see those towers, I know that there’s something totally inequitable. Black and brown people are not benefiting from all this in the way that the rest of us are.

A Reckoning in Boston will screen on February 10 at 7 p.m. in the Interfaith Chapel, followed by a Q&A with Rutenbeck and Dixon.