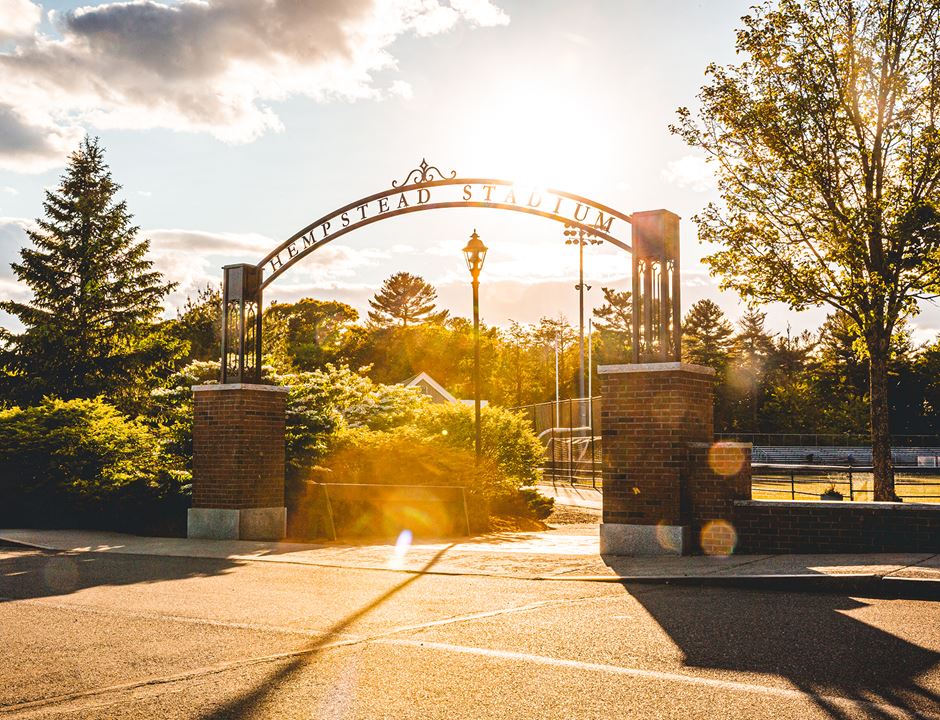 With championships, anniversaries, and achievements off the field, to say it was a great year to be a Gull would be an understatement.

With championships, anniversaries, and achievements off the field, to say it was a great year to be a Gull would be an understatement. Join us as we look back on some of the most inspiring Endicott Athletics moments from 2019.

We begin with an anniversary. The first coeducational class entered Endicott College in 1994 and as a result of that milestone, the College marked 25 years of combined NCAA Division III membership this past year. Needless to say, things have grown quite a bit in the past quarter-century. Athletics are an integral and vibrant part of life at Endicott. We now have over 700 student-athletes—which accounts for 24 percent of the entire undergraduate population—representing the Gulls across 21 intercollegiate programs and seven club-level programs.

There was certainly no shortage of wins to celebrate in 2019 as the Gulls advanced to several Commonwealth Coast Conference (CCC) championship contests. History was made when every fall team competed for a title this year. Ultimately, CCC Championship trophies were hoisted in field hockey, men’s golf, women’s lacrosse, softball, and women’s volleyball. Outside the CCC, women’s ice hockey captured a Colonial Hockey Conference (CHC) Championship and men’s volleyball became New England Collegiate Conference (NECC) champs. Football also had a successful 2019 with a 9-2 record as they topped Dean College to become New England Bowl Champions for the first time in school history. Meanwhile, defensive lineman Sam Opont ’21 recently became the first student-athlete in Endicott football program history to be nominated for the Cliff Harris Award, which recognizes the nation's top small college defensive player.

The wins didn’t stop there though, as club sports celebrated towering achievements on local and national stages. Roller hockey became National Champions. Cheerleading placed seventh in the nation. The dance team went on a historic run at nationals, secured its ninth straight UDA New England Regional title, and was also named Best in the Northeast. Men’s rugby placed fourth at the NSCRO 15s Champions Cup and women’s rugby piled on wins including a CCRC Championship, a NSCRO Northeast Region Championship, and a runner-up finish in the NSCRO National Title contest.

Many of our individual student-athletes received recognition as well. Endicott inducted four into its Athletics Hall of Fame this past September and we saw a total of 22 major athletic awards in addition to 15 All-American student-athletes and four Academic All-Americans named. Other notable achievements include Abigail Keim '19, who was selected as the CCC nominee for the 2019 NCAA Woman of the Year Award. Evan Couchot '20 from men’s soccer became the first student-athlete in Endicott history to be named an Athletic All-American, CCC Senior Scholar-Athlete, and CoSIDA Academic All-American. He also became the program’s all-time leading scorer. Kristen McCarthy '20 smashed records as she became the only two-time All-American First Team selection in program history this fall, while also becoming the first-ever field hockey student-athlete to earn NFHCA New England Regional Player of the Year accolades and two CCC Offensive Player of the Year honors. In addition, she became the fastest field hockey student-athlete in Endicott history to reach 100 points—only taking her 35 games to reach the milestone.

We even saw some former Endicott student-athletes playing professional hockey. Logan Day is representing the American Hockey League, Jack Musil plays in the Elite Ice Hockey League, Ross Olsson ’18 M’19 is in the ECHL, and Tommy Besinger ’19 and Josh Bowes ’18 M’21 both lace up in France in the Synerglace Ligue Magnus.

Off the Field Wins

Combining academic success with all that winning on the field can be a tricky balancing act. Luckily, the Gulls were more than up to the task. Student-athletes held an impressive 3.31 average GPA in 2019 and 227 of those student-athletes made the Dean’s List for the spring semester. Endicott also continued to hold the top spot on the CCC Fall and Spring Academic All-Conference lists for the achievements of its student-athletes. Spring 2019 in particular saw a new school record with 107 names added to the list. Much of this success can be attributed to Endicott’s Division of Academic Success closely collaborating with coaches to ensure student-athletes keep academics their top priority. All this led to some impressive professional opportunities for the Gulls, including women’s tennis student-athlete and sport management major Alexandra Barone ’19 being selected to attend the NFL’s Women’s Career in Football Forum. She now works at Yale University as the Assistant Director of Football Operations.

With the winter athletics season already underway, the Gulls look forward to continuing their record-breaking achievements into 2020. Find out more about Endicott's varsity and club sports offerings at ecgulls.com.