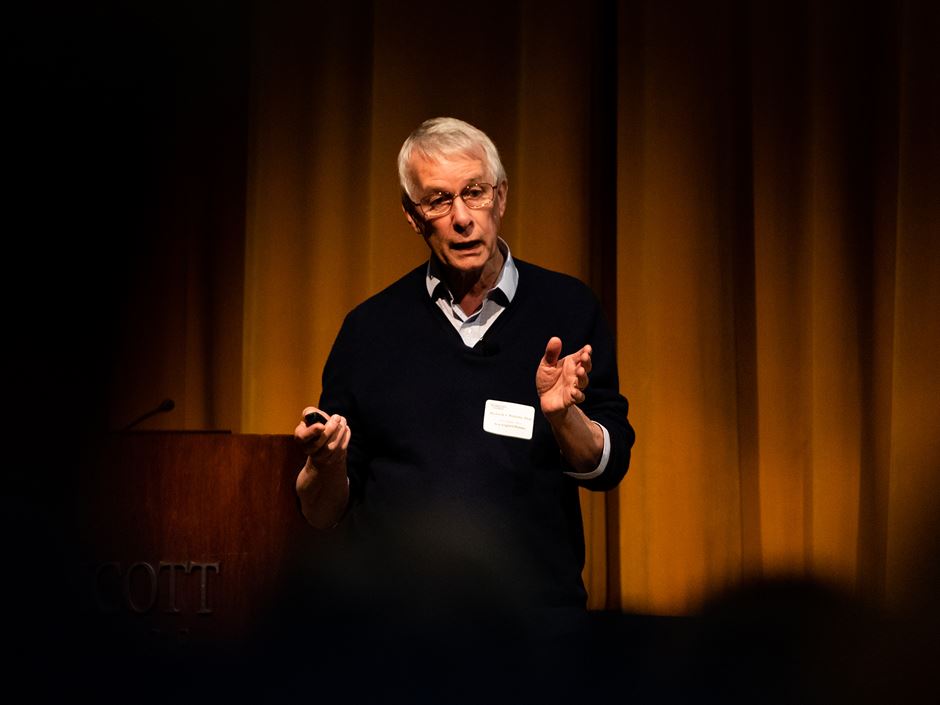 So often in life, people find perfect opportunities simply by being in the right place at the right time. In the case of the North Shore Technology Council (NSTC), its organization found this to be more than true when Endicott College Dean, School of Arts & Sciences, Dr. Gene K. Wong, suggested that it hold its Biosciences Seminar with Nobel Prize winner Sir Professor Richard Roberts, chief scientific officer at New England Biolabs, on campus.

He says, “When NSTC was planning the event and details were outlined at a board meeting, I offered to have Endicott be the host site. The event organizer and I are members of the Board of Directors of NSTC. Endicott had the facilities that included an auditorium for the presentation, and space for area companies and organizations to be here so that students looking for potential internships and employment would be able to interact with them.”

The keynote speaker of the evening, Roberts is credited with “the discovery of split genes and mRNA splicing in 1977, for which he received the Nobel Prize in Medicine in 1993.” His work involves incredibly sophisticated sequencing technology, which made our campus—with its industry-leading technology—a natural choice for genomics enthusiasts and professionals.

Wong says, “The main reason the event was organized was to showcase the North Shore biotechnology region, especially in the area of genomics, where Endicott has a next-generation DNA sequencing facility that is available for use by companies. This was made possible through a $5 million Massachusetts Life Sciences Center in 2013 to the Life Sciences Consortium of the North Shore, of which Endicott received $1 million.”

Our students and the scientific community have access to potentially lifechanging technology in their everyday lives, which is something we are proud to maintain and promote.

In total, just about 200 people came to the lecture at the Walter J. Manninen Center for the Arts in the the Rose Theatre to learn about genomics, and many went on to socialize at the after-seminar networking event at our on-campus bar, Gully’s.

We were honored to have such a celebrated scientific leader and the community at large join us for their Year of Genomics Signature Event.

We encourage you to learn more about our biology/biotechnology program, which covers the areas of genomics, bioethics, molecular biology, and bioinformatics. Who knows? You may be the next Nobel Prize candidate!