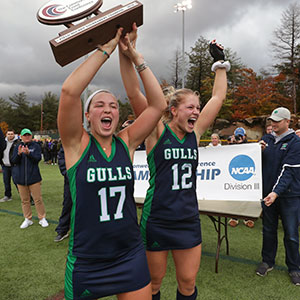 The Endicott field hockey program is one of
many Gulls sports teams that maintained both
high athletic and academic performance, consistently.

Athletics and recreation have been a part of the Endicott College lifestyle since its inception in 1939. During this time, the College has witnessed an impressive 97 conference championships and 87 NCAA Division III tournament berths, including 29 appearances in the second round or beyond. And as a proud NCAA Division III institution, the College challenges its student-athletes to be their best both on-and-off the field, court, or rink. Academically, Endicott student-athletes boast an impressive 3.31 GPA, which mirrors the entire student population.

With 21 percent of the undergraduate population involved in intercollegiate athletics, it is not only an essential piece to enrollment but also a point of pride for the community—both current students and alumni. It goes without saying, having a president who not only understands the importance of athletics but who has relatable experience as a student-athlete themselves, is an essential piece in continuing the growth and success of athletics and recreation on campus.

A passion for sports.

Sports have always been a part of President Steven R. DiSalvo’s, Ph.D., life. DiSalvo, who grew up in the New York City borough of Queens, started out playing little league baseball. “It taught me about camaraderie, leadership, and creating a support system. It also taught me how important the coaches are because at that age, you’re not only learning the fundamentals of the game—you’re learning how to act on-and-off the field.”

Fast forward to high school where DiSalvo showcased his tennis skills during his days at Saint Francis Preparatory School and learned a lot about what it meant to be part of a winning team, and also how to bounce back from a loss. His team, which was part of the Catholic High School Athletic Association, would win the City Championship every year and advance to the Long Island Championship. However, being matched up against a player by the name of John McEnroe proved challenging and his team’s season would ultimately end at the same point each year (until McEnroe moved on to Stanford University).

DiSalvo then took his tennis game to Fordham University where he played for two years before deciding to dedicate 100 percent of his time toward academics. 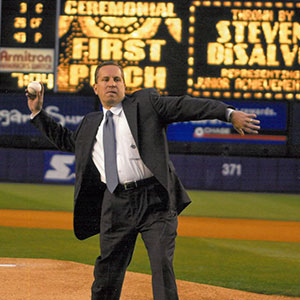 Athletic events are points of pride for an institution. DiSalvo shares that building winning teams is important because it draws a sense of community. “When athletic teams are doing well, alums want to come back to see their alma mater, the local community wants to catch a game, and current students want to support their peers.”

While he brings a wealth of higher education experience to Endicott, DiSalvo also has impressive business experience, including executive director of the Joe Torre Safe At Home Foundation, which is committed to helping children heal from traumatic violence and abuse. Working closely with the former New York Yankees manager allowed DiSalvo to learn the importance of building a successful athletic program—knowledge he’s brought into his role as College president.

“It starts with every team wanting to get better than they were the year before. You don’t have to win it all, but you have to improve. The key to improving? Great coaches. Great players want to play for great coaches. If you populate your teams with great coaches, they will recruit, nurture, and motivate the team to play at their highest potential.” He says that it’s not about being able to win championships in every sport, it’s about developing young people and giving them the opportunity to succeed both athletically and academically.

He shares, “I always find it fascinating if you look at the roles athletes end up working in at their respective companies. Athletes almost always rise to leadership positions. This is because they are used to being able to motivate a team, to work collaboratively with people, and to produce.”

DiSalvo shares that by investing in student-athletes, the College is ultimately creating a brand extension that reaches far beyond the athletic program. When students go out into the workforce, companies will recognize the impact athletics has had on students and say “Endicott produces leaders.”

DiSalvo says that it all goes back to the College’s ability to educate the whole student—mind, body, and spirit, and giving our student-athletes the opportunities to excel in all of those areas. “Athletics is as much about the physical nature of the sport as it is the mental nature of being prepared and ready to compete at that high level. You can have the best physically prepared athletes on the field, but if they aren’t mentally prepared, then they won’t advance very far.”

In Division III, DiSalvo shares, it’s important to remember that we are student-athletes and academics is our first priority. Working closely with The Division of Academic Success and increasing support services on campus will only further our student-athletes’ success in the classroom.

When asked if there is room to improve? DiSalvo says absolutely. “I think we have all of the elements necessary for us to compete at the highest level. If you push the envelope a little further each year, eventually, you win it all, and I think we have an opportunity to do that in several sports.”

When he’s not on campus, you can find DiSalvo practicing his newfound hobby—golf. “They had to train me on how to get rid of my tennis swing and teach me the golf swing, but every now and then the tennis swing still creeps back in.”

Find out more about Endicott's varsity and club sports offerings at ecgulls.com.