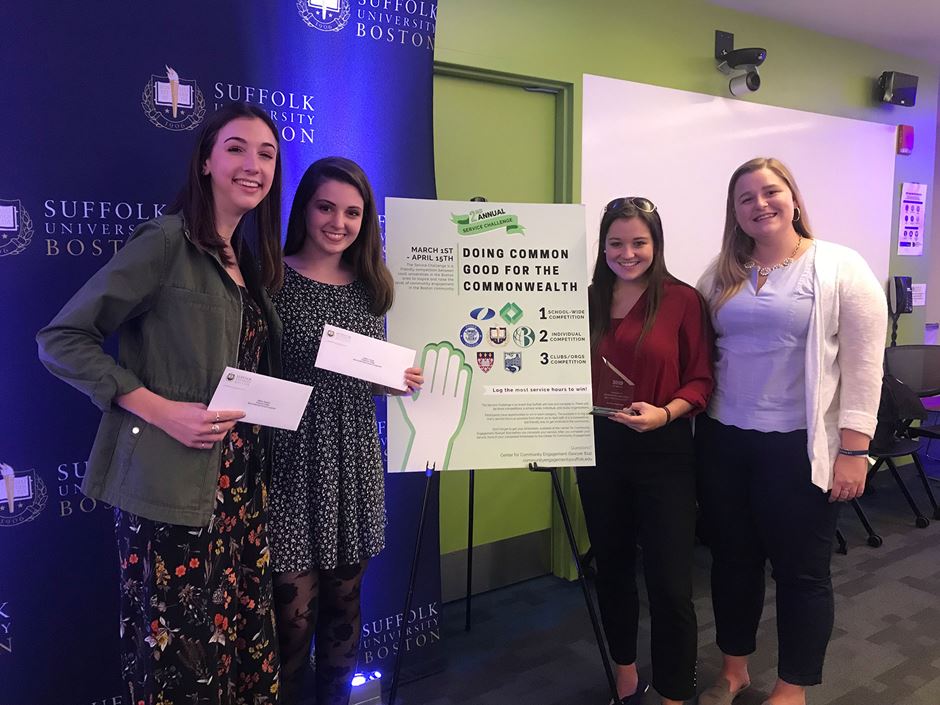 Endicott students completed the most hours of community service during the Second Annual Boston Community Service Challenge with more than 9,000 hours over the course of the competition.

Allison Tantone ’21 and Ashlyn Young ’21 were two integral pieces to Endicott College completing the most hours of community service during of the second annual Boston Service Challenge, a friendly six-week competition among Boston-area colleges and universities that increases each school’s community service engagement.


In line with the competition’s aim of “doing the common good in the Commonwealth,” all participating schools made impressive community service gains. Endicott led the way with more than 9,000 hours of community service over the course of the competition—42 hours of which came from Tantone and 42 hours from Young—the highest number of hours logged by any other Endicott students.


Young, an interior design major, has a passion for affordable housing, spending seven hours at Habitat for Humanity build sites each week. Recently, she went above and beyond her construction mandate by lending her design expertise and working tactile features into a room for a young occupant on the autism spectrum. Some of her other recent service projects include supporting ALS fundraisers and the Endicott Wishmakers, whose work benefits the Make-A-Wish Foundation.


When asked what it means to be one of two students who had the highest hours of community service participation, Young shares, “I love helping out in the community and it makes it that much more rewarding to have this recognition. Everyone who participates in community service at Endicott puts in a lot of time and effort, so it is so special to me that I was recognized for my dedication to service.”

Young, who began doing community service projects in high school, says that she has felt a strong connection to help the community ever since. “I love being able to make an impact on the community by just lending a helping hand. I can’t imagine spending my time doing anything else as community service brings me so much joy and has introduced me to so many people from different backgrounds.” On Young’s bucket list before graduation? Participating in a Alternative Spring Break through Endicott’s Community Service Office.


Tantone is an elementary education major whose service runs the gamut from programs combating hunger and homelessness to EC Buddies, a program similar to Big Brothers Big Sisters, targeted specifically to those with special needs—a perfect fit as her goal is to work in a special education classroom after graduation. Community service became a part of Tantone’s life at an early age when she and her mother would volunteer at a local soup kitchen. She says that she still goes every time she’s home as they have become her “second family.”


Tantone says that she views volunteering as just another activity in her day, and that it isn’t difficult to find just a half hour of free time to dedicate to service in the afternoons or evenings. “Volunteering is so easy and the results that come from it are often much greater, I’m grateful for the life I’ve lived and I feel that I have the opportunities to give back. So why not? There is only good that comes from it.”


Tantone shares that her favorite service project is meal packing. “I have participated in multiple meal packing events on campus and they are always so much fun. Every station is racing to be the first ‘team’ done and package the most meals. It typically lasts about an hour-and-a-half but the first hour always flies by, you lose track of time. It is a super fun event and in the end it’s for an amazing cause, thousands of meals are packed in a quick and simple manner.”


“Giving back to the community is deeply ingrained in Endicott’s culture. It’s core to our vision of educating the whole student to succeed—not just in their careers, but in living a full, meaningful life,” says Rhoades.


As part of the Challenge, Endicott students engaged in more than 100 projects from March 1 to April 15, many with local chapters of national organizations such as Habitat for Humanity, Family Promise, Rise Against Hunger, Big Brothers Big Sisters, Make-A-Wish Foundation, One Love, American Red Cross, the St. Bernard Project, and the American Cancer Society, among others.


Beyond the six-week competition, 56 percent of Endicott students participate in community service each year, which is double the national average for a college campus. To learn more about the College’s community service efforts, visit endicott.edu.