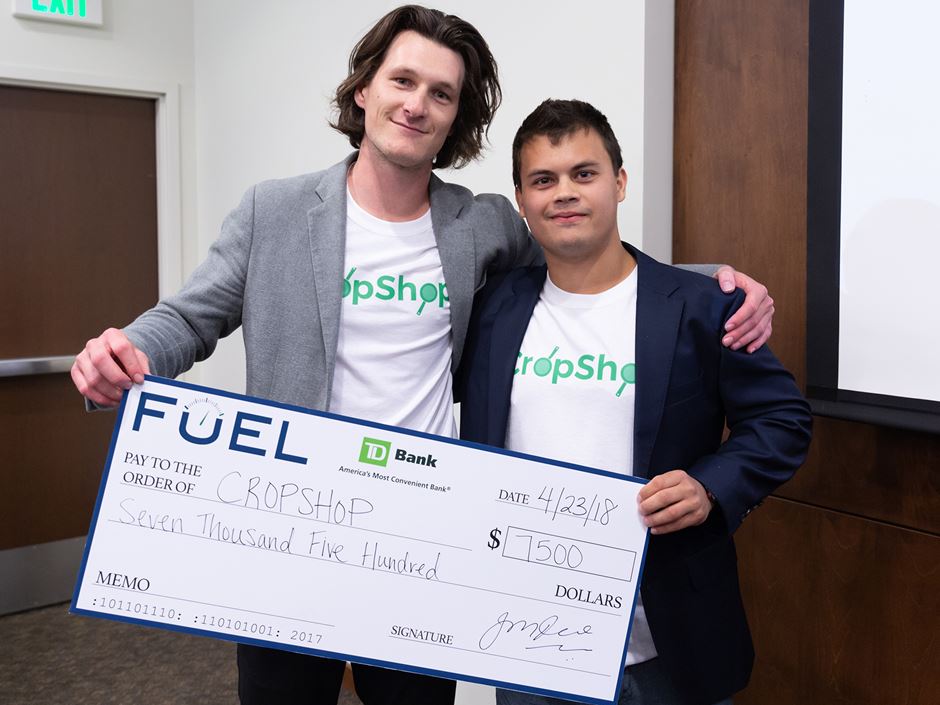 Entrepreneurship is in our DNA. It’s who we are. When you step foot onto Endicott College’s campus you see it happening in the Angle Center for Entrepreneurship, our living laboratory for students to explore, design, build, and launch. You see it in our annual business plan competition, Spark Tank, where students compete for seed money to bring their ideas to life, and our Startup Bootcamp weekend, which hosts entrepreneurs who are thinking about launching a company. You see it in the opportunities here for students to work alongside highly-accomplished entrepreneurs.

“It's our vision to absolutely be the regional hub for entrepreneurship and both push out and pull in entrepreneurial activity,” says Deirdre Sartorelli, assistant dean of the Angle Center for Entrepreneurship.

This rings true for Justin Topp, assistant dean of science, technology, engineering, and mathematics (STEM), who says, “If students come to us with an idea for a business, we’re going to help them. There’s a general culture within STEM of start-up spirit and entrepreneurship.”

It’s this entrepreneurial spirit that fueled AJ Marcinek ’19, environmental science major and co-founder and CEO of CropShop, to believe that his idea could truly become much more than that.

Marcinek originally met CropShop’s now co-founder, Cam Bleck ’19, computer science major, in their freshman year at Endicott as members of the men’s ice hockey team in 2015.  From the get-go, they shared a similar mission; they both had a desire to do something big that would be impactful, and they both had the drive to get them there.

Keenly aware of the organic food movement, Marcinek realized that chefs may have a hard time finding stable and sustainable sources of produce and sensed that technology may be able to solve this problem in the market’s space.

Enter CropShop, a mobile marketplace whose goal is to deliver the best ingredients possible to chefs from local farmers. Marcinek and Bleck pride themselves on bringing the best to chefs and farmers through the app and simplifying the farm to table process.

They first brought their idea to Spark Tank and left with the first-place prize and $7,500 (thanks to the generosity of presenting sponsor TD Bank).  The seed money helped to bring their pitches from ideas to reality.  That’s when CropShop really gained momentum.

Both assumed the roles in the business that spoke to their individual skillset pretty quickly. Marcinek handles the business side of things and works closely in sales, marketing, and coordinating the deliveries while Bleck is the coder and systems engineer, working on the website and the app.

The two had the opportunity to work on CropShop as part of their senior internship with Sartorelli as their advisor. She says, of her role, “The hard questions have to be asked of our student entrepreneurs. If we don’t ask them here, certainly a prospective customer will! So, I need to be direct while also being supportive. With AJ and Cam, as they have worked with me, they know I am going to ask questions of them that an investor would.”

"Endicott has given CropShop the runway, access to knowledge, and the push to go as far as CropShop’s business model will allow it. The evolution of CropShop is a story of resiliency and self-awareness."

“Endicott has given Crop Shop the runway, access to knowledge, and the push to go as far as CropShop’s business model will allow it,” says Sartorelli. “The evolution of CropShop is a story of resiliency and self-awareness.”

A few words from one of CropShop’s co-founders.

Marcinek shed a little light on what it’s like to run a startup while juggling also being a student, too. Here’s a look at what he had to say.

How has your program at Endicott prepared you to take on the challenges that come with running your own business—from the ground up?
My classes and major definitely gave me the opportunity to build time management habits, critical thinking skills, and public speaking skills which have all played a role in helping me grow CropShop…I’ve also been lucky to have a group of advisors and people around me to lend a helping hand when needed.

What was it like to work on a startup as part of your internship experience?
We thought it was incredibly cool that we were the first students to do their senior internship at their own startup, and we were lucky enough to have our own little office. Although we were working on CropShop full-time at the beginning of the semester, it only incubated and supported our efforts and resulted in us working pretty much all day every day.

How did your experience winning the Spark Tank competition propel CropShop’s growth?
Spark Tank was such a crucial experience for us. We were fortunate to win first place and secure capital that was the first investment the company received. I know we were proud of ourselves for executing our pitch, but also gracious that the judges believed in us and CropShop. It’s easy to say we would not have gotten this far without the money from Spark Tank and the huge momentum and confidence boost it gave us to keep pushing towards our goals.

Learn more about the Angle Center for Entrepreneurship and the opportunities it provides students of any major or take a closer look at Endicott’s computer science and environmental science programs. For more information about business at Endicott, visit endicott.edu.