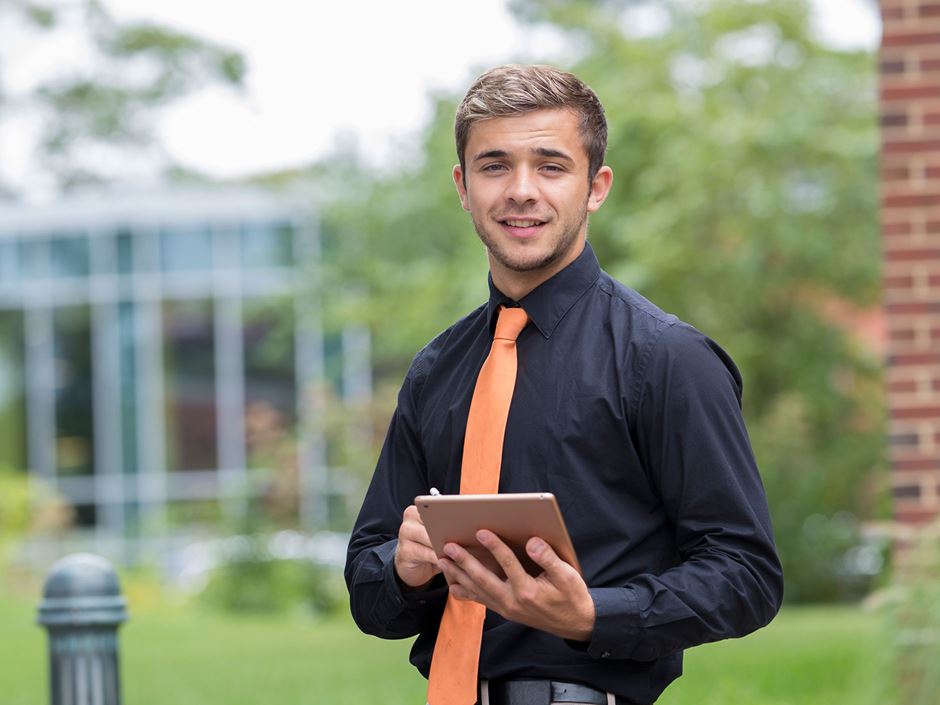 Dario Neukom '18 began his undergraduate business degree at The College of International Studies Madrid before using the partnership with Endicott to finish his studies and build his resume through internships while winning a soccer championship for the Gulls.

The Endicott College men’s soccer team was hours away from potentially winning its first-ever Commonwealth Coast Conference (CCC) championship, and he had a gut feeling that fortunes were about to change.

Call it whatever you want—a premonition or just a lucky guess—but the Palme de Mallorca, Spain native followed through with the game-winning overtime goal against Gordon College to send the Gulls to their first NCAA Tournament.

“I get goosebumps right now when I think about my game-winning goal,” says Neukom, who graduated in May 2018 with a bachelor’s degree in business management and is in the Van Loan School at Endicott College’s Fifth Year MBA program. “It was probably the best moment of my life. I don’t remember much of the play because I just lost it.”

That jubilation was in stark difference from the previous year when Endicott and Western New England University went to penalty kicks in the 2016 CCC Semifinals. Neukom missed his try in the fourth round, which was a pivotal moment in the game.

As the forward added, though, there’s always justice in soccer, as he proved the following year with his family in the stands and a Spanish flag ready for a potential celebration.

“Right before the game I had a feeling that it was going to be my game,” Neukom says. “I told my mom, ‘I have this Spain flag. Take it to the game, and if I score anything, just give it to me.’ And it happened to be.”

That gut feeling was there heading into the season, too, when he texted his coach, Joe Calabrese, that he would redeem himself with plenty of trophy emojis, indicating that his goal was to help the Gulls win their first conference title.

“Ultimately, it’s a great life lesson,” says Calabrese. “No matter how low the low points are in your life, they’ll never match the greatest or happiest moments you’ll experience in the realm of sport, your professional career, or with your family.”

Neukom initially started his undergraduate business studies at The College of International Studies Madrid, which has a partnership with Endicott that allowed him to study for two years at both schools. While in Madrid, Neukom met some of his future Endicott teammates who were studying abroad for a semester, and they convinced him to visit the Beverly, Mass., campus.

“You visit this campus and you know you want to be here.”

Endicott’s semester-long senior internship also was a key draw for Neukom, who completed his at Aflac. He says his internship helped him identify his future career path by honing in on specific interests.

He hopes to add another American company to his resume by utilizing his one-year visa once he finishes his MBA.

“My main goal is to stay here one more year and use my visa,” says Neukom, “and learn as much as I can because it’s always great to have an American company on your resume once I get back home.”

After that? Who knows. He would like to go somewhere that speaks English, but you never know where life will take you, on the soccer pitch or the business world.

But it sure has been a fun ride along the way.

“For me, it’s been the best three years of my life,” says Neukom. “I’ve felt really comfortable here. The people are great. The College, the opportunities, are unreal. Having the ocean is also a big piece for me. I’ve met so many people and I’m going to have so many friends forever from Endicott.”