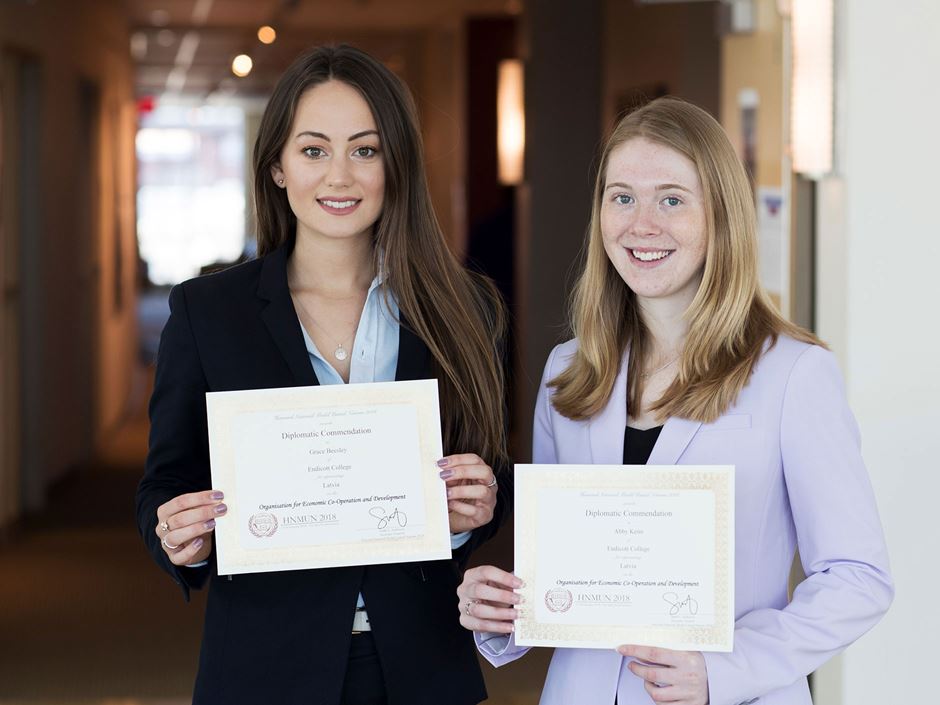 Model UN allows students to hone skills, network with students worldwide, and negotiate resolutions to the world’s most pressing problems.

Sixteen Endicott Model UN students competed in the annual Harvard National Model United Nations (HNMUN) competition this year alongside 2,700 students from 69 countries. Representing the country of Latvia, our team worked as delegates in various UN committees debating and negotiating resolutions on the world’s most pressing problems. Abigail Keim ‘19 and Grace Beesley ‘19, delegates on the (OECD) committee, each took home a Diplomatic Commendation Award.

Alana Tiemessen, assistant professor of security studies, is the faculty advisor of the Model UN team at Endicott. She explained that the goal of the club is to, “allow students, from across majors and backgrounds, an opportunity to engage in diplomacy on global issues.”

For individuals who remain dedicated to global citizenship and who get jazzed about debate and negotiation, Model UN may very well be their dream club. Tiemessen, Beesley, and Keim covered some of the pro’s to making Model UN your “thing.”

We live in a global world.

“I think Model UN encourages students to think globally in that they meet other delegates from around the world and are forced to think about global issues from a perspective that is not their own,” said Tiemessen. “It also helps students break out of their American bubble and engage in the tough work of political compromise and dialogue with other delegates who may have a completely different world view and experience with the issues being debated.”

These skills come in handy.

“The club and competition build public speaking, policy writing, negotiation and diplomatic skills,” said Tiemessen. Beesley supports that claim, saying that, “When I first did it I was very nervous, but once you do it more than once, you gain more confidence each time.” Keim utters the same sentiment and claims that the ever-popular public speaking, is now “way easier” for her since she’s had practice through Model UN.

“It gets you thinking on a global scale. Many times, you’re debating things from a US perspective, it’s important to remember the rest of the world and that there are other ways of doing things,” said Keim.

Effective compromise is a fact of life.

“You have to present the resolution and convince everyone it’s the best resolution in order to have them sign onto it,” said Beesley. “You just have to criticize other’s ideas in the nicest way possible and give them a legitimate reason why your idea is better.”

With competing schools coming from all over the world from Russia, to India, to Venezuela, Keim said, “You get to meet people from totally different walks of life.” She explained, “You get to know people pretty well, you’re working 48 hours straight with them.”

For more information about Model UN at Endicott, contact Alana Tiemessen at 978-232-2123 or atiemess@endicott.edu. Want to learn about other global learning opportunities? Contact the Office of International Education at +1-978-232-2272 or wjaferia@endicott.edu.