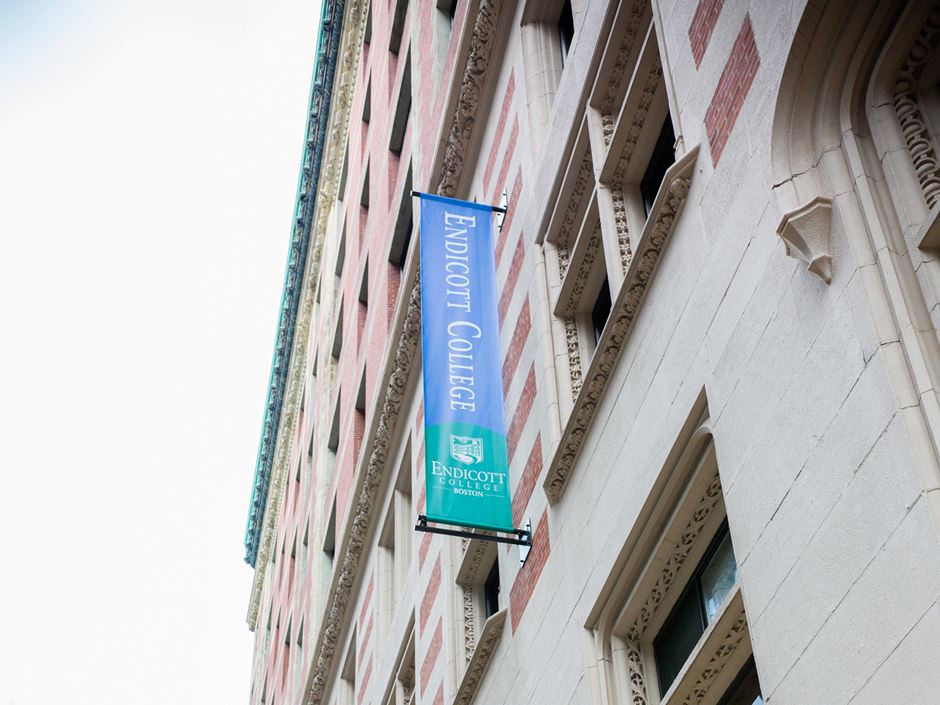 Endicott College Boston has created opportunities during its first five years for a growing community.

When Endicott College Boston opened its doors to students for the Spring 2013 semester, “Six Brave Ones” signed up for classes and took a chance on the brand-new project, which set out to serve a diverse population, including urban youth and English Language Learners (ELL), through accessible education.

Five years later, Endicott Boston has grown into a flourishing urban college that offers associate’s and accelerated bachelor’s programs, plus a master’s degree in business administration (MBA). Classes are offered during the day and night through an extension of the Van Loan School at Endicott College, which has a persistence rate of 84 percent, completion rate of 61 percent – well above the nation average of 20 percent – and 66.7 percent growth between 2012 and 2016.

“Part of our strategy was reaching out to urban students and offering services to address their needs like ELL support and on-site bilingual assistance,” Endicott Boston Director Marcelo Juica said. “It’s a strategy that has worked well within the Boston community.”

But in order for all that success to happen, a lot of planning took place before any students stepped foot on the old campus five years ago.

Juica was working at the Urban College of Boston when he first met Endicott College President Richard E. Wylie. Dr. Wylie later asked him to head the Boston project with Endicott Academic Dean Brian Pellinen, and the two got to work on developing a pilot phase in Fall 2012.

“Over the years I’ve trained the staff to be very sensitive to the needs of bilingual learners, but also to be an advocate for those students who are coming out of high school with some needs for remedial coursework,” Juica said. “So, we created some ways and systems to address that – courses, better advising, tutoring that’s very intentional in hiring individuals who can do this work.”

Among the students who benefitted from this approach was Sherley Belizaire, who graduated from Endicott Boston in 2017 with a Bachelor of Arts in Liberal Studies with a concentration in early childhood education. The Haiti native wanted to enroll at a college that was immigrant-friendly with a strong English as a Second Language (ESL) program, and Endicott Boston was the perfect fit. She now is working as the lead teacher at the Roxbury YMCA, and her dream is to work for Boston Public Schools.

The school transformed into a convenient space for students to study and congregate before, between, and after classes. The students also benefited from a Chromebook program through financial aid, which Dr. Wylie set up after they asked him for help with technology at an assembly.

But by the time 2015 rolled around, there simply was far too much demand to stay at 19 Temple Place. Classes had to be held in the common area, as well as on different floors in the building. The Master of Business Administration program, which started being offered in Boston in 2013, also was growing by this point, adding the need for even more space.

“The move was important to us to stay connected to the community we serve,” Juica said. “With our new space, we are able to conduct more programs and allow our students to participate in meetings and gatherings. Part of our success in recruitment is due to our connections with Boston non-profit organizations, local high schools, and educational programs for new immigrants and adult learners.”

While the first five years has been incredibly successful, Juica still sees room for growth before the 10th anniversary. His to-do list includes creating more employment opportunities for students — including through Endicott College’s signature internship program — additional programs for ELL students, support for single parents, and increases in advisors and scholarships.

It’s a vision that is welcomed by all in the Endicott College community.

“I am thrilled that we are able to serve a diverse community of students in the heart of downtown Boston,” Dr. Wylie said. “The Van Loan School and Endicott Boston are invested in the success of these students. We all look forward to working with many more during the next five years and beyond.”