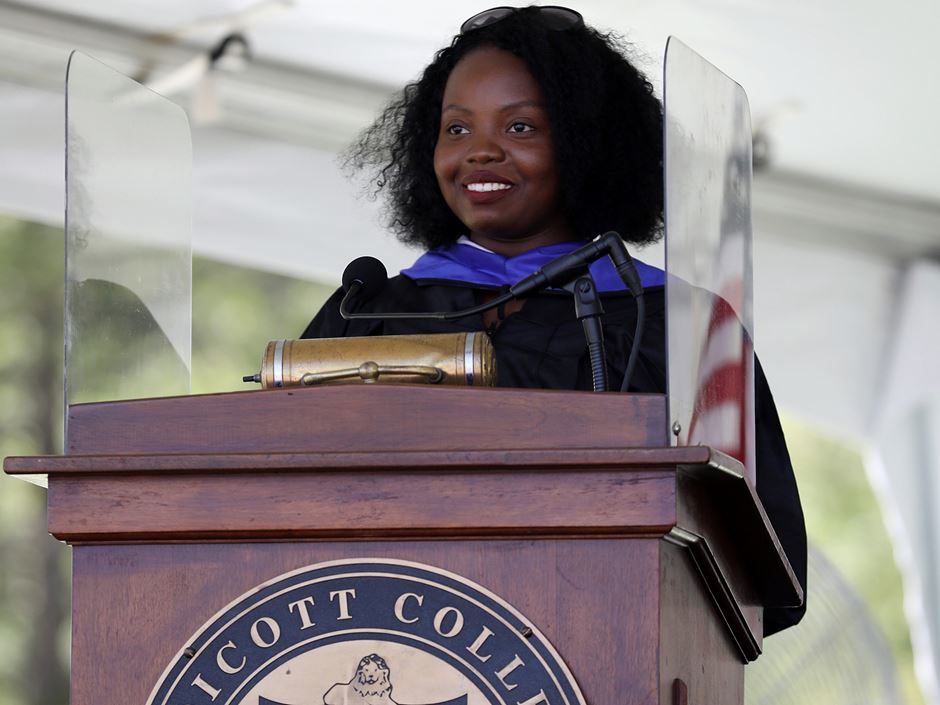 Since coming to the U.S. in 2009, Sherley Belizaire has gone from not speaking any English to being an Endicott Boston alumna and lead teacher at a YMCA.

Sherley Belizaire’s Endicott College story began when she was a little girl growing up in Haiti. She dreamed of working with children someday, and Endicott Boston later helped her achieve that goal.

Belizaire spent most of her childhood in Haiti before coming to the United States in 2009, and she didn’t speak any English before entering Boston International High School as an English as a Second Language (ESL) student.

With cost being a major issue, Belizaire started looking at colleges around Boston, and her high school counselor had a life-changing recommendation for her – Endicott Boston. Belizaire was impressed with the support she saw for immigrants, including from Endicott Boston Director and fellow immigrant Marcelo Juica.

“Endicott welcomes everybody, and they really push for the student’s success,” Belizaire said. “I love that, I really love that. It feels like a family.”

Belizaire added: “When I started at the school, I was this shy woman who didn’t like to talk. But when I graduated, I was a completely different person. The reason why is because I love Endicott, the fact that all the professors, they care, and they reach out to you. They wanted to make sure that I got all the resources and help I need.”

Belizaire was part of Endicott Boston’s Fall 2013 incoming class, and she initially worked her way toward an associate’s degree in integrated studies. She intended on turning her desire to work with children into a career in the medical field, but an internship at a YMCA childcare center changed everything.

She realized being a preschool teacher was her calling, so she also pursued a Bachelor of Arts in Liberal Studies with a concentration in early childhood education.

While earning her degree, which she finished in 2017, Belizaire worked as the second teacher in a Preschool Expansion Grant classroom at the East Boston YMCA before her recent promotion to lead teacher at the Roxbury YMCA. Her dream is to work for Boston Public Schools, and she’s well on her way with her paraprofessional certificate through the BPS Community Paraprofessional Development Program. She soon hopes to take the Massachusetts Tests for Educator Licensure (MTEL), and she plans on earning a master’s degree in special education or ESL.

To say she has come a long way since her first interview with Juica and Endicott Boston would be an understatement.

“I remember in her interview meeting with this young student from Haiti who was very excited about college and very excited about getting a degree,” Juica said. “You know that this was a perfect fit for her because she wasn’t ready for the large schools. We worked with Sherley over the years and have seen just an amazing growth.”

The last thing Belizaire did as an Endicott student was speak at the 2017 Baccalaureate event, when she shared her courageous story in front of her fellow graduates. As Juica put it, it was the perfect ending to her Endicott Boston journey.

“Sherley’s a terrific advocate and ambassador,” Juica said. “She comes into our orientations to meet new students, so she always volunteers to come to events. She’s a great alumna for Endicott. So we want more students like Sherley who can take advantage of this work, take advantage of the resources that we have. I have great hopes for Boston doing that, producing students like Sherley.”