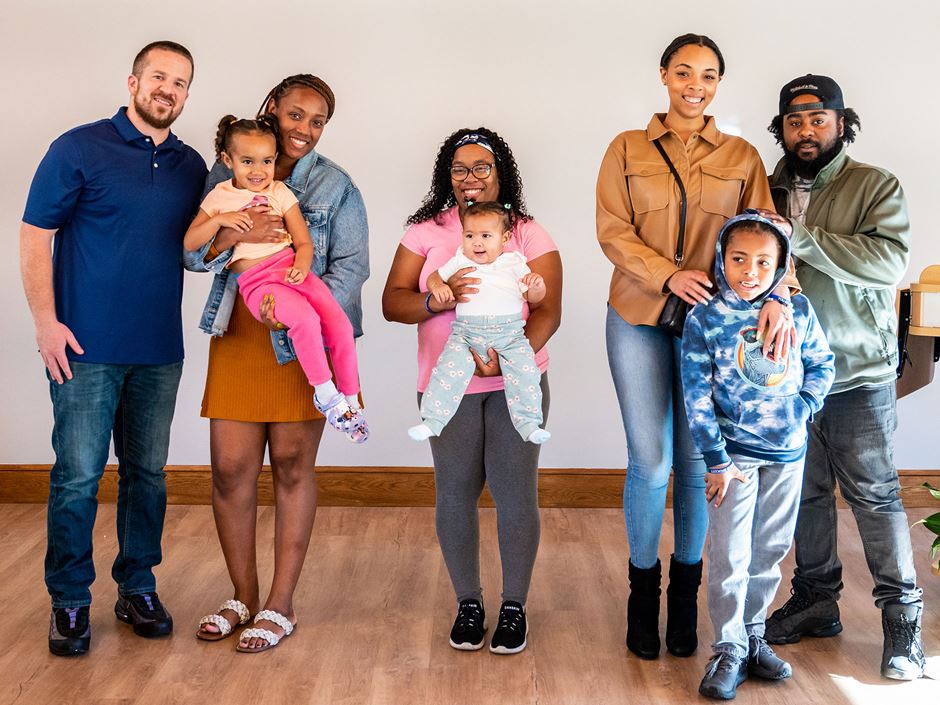 Endicott’s Single Parent Services is empowering a new generation of parent scholars to pursue a college degree.
By: Sarah Sweeney

Tiara Murphy ’24 often works on homework at 3 a.m., not because she’s a night owl, but because her 11-month-old is teething.

A single mother to Aliana and 7-year-old Alijah, Murphy attends asynchronous remote classes at Endicott, and couldn’t do it any other way.

Murphy is one of a small cohort of parent scholars enrolled in Endicott through a program that started nearly 20 years ago, after an enterprising single mother approached Endicott’s late former president Dr. Richard E. Wylie with a simple question.

“She said, ‘People who have children deserve a chance to be able to experience college, too. What can we do?’” recalled Amy Cohn, Director of the Center for Academic Coaching.

That inquiry launched Keys to Degrees, which empowered parent scholars, aged 18 to 24, to pursue an undergraduate degree while utilizing campus housing, childcare services, scholarship support, and more. Parent scholars lived with their children in a campus residence hall and could take advantage of a suite of programs offered by the College.

While living on campus provided parent scholars with an authentic college experience, it had limitations. Many single parents rely upon a close network of family members and friends to help with finances, emergencies, and child care, and access to this outside help was curtailed by a fixed campus address. Parent scholars wanted to be closer to these vital connections.

More than four years since Wylie’s death, Keys to Degrees has been revamped and renamed as Single Parent Services, which relaunched this fall under the Van Loan Division of Professional Studies. The program has a longstanding partnership with Boston’s Jeremiah Program, which refers young learners to Endicott and other colleges throughout the Commonwealth.

Adopting what worked with Keys to Degrees, Single Parent Services offers the Endicott education but “as a non-residential program. Students with families wanted more autonomy and independence in raising their children, how they oversaw their family and flexibility in which events they attended,” said Douglass.

A non-residential program also means that most, if not all, parent scholars are either commuters or remote learners who rarely visit campus.

But on November 12, Endicott’s parent scholars, including Murphy, gathered at the Center for Belonging & Inclusion for a festive lunch that celebrated their dedication while helping to solidify their connection to Endicott.

“We understand that many traditional undergraduates are juggling lots of balls, but we also know that the reality for single parent scholars is that they have yet more balls to juggle, and we understand what an incredible commitment they’ve made to their future and the future of their family by matriculating,” said Douglass.

Murphy, who found Endicott through the Jeremiah Program and is majoring in psychology with a minor in trauma studies, wants to become a psychologist who helps children and families navigate past trauma not unlike her own.

“I’ve had my fair share of ups and downs,” she said. A domestic abuse survivor, Murphy is committed to both family advocacy and social justice—she’s been featured on the show Chronicle as an advocate for affordable housing and community resources and wants to leverage her experiences, both bad and good, to help others.

“What I’m looking to get out of this program is a positive and long learning experience,” she said. “I’m really blessed to be here. And I’m happy that I’m here.”

For Douglass, inviting the parent scholars to campus has profound implications.

“It’s a way to say that Endicott College isn’t just this thing that you can’t put your finger on, but a real place filled with individuals who are committed to you and your future,” she said.

In just her first year at Endicott, Murphy has already felt that commitment. She said that professors have phoned her, and administrators have made themselves available anytime she’s called them.

“Out of all the colleges I’ve been to,” she said, “this is probably one of the best experiences so far, even though it’s only been a couple of months.”