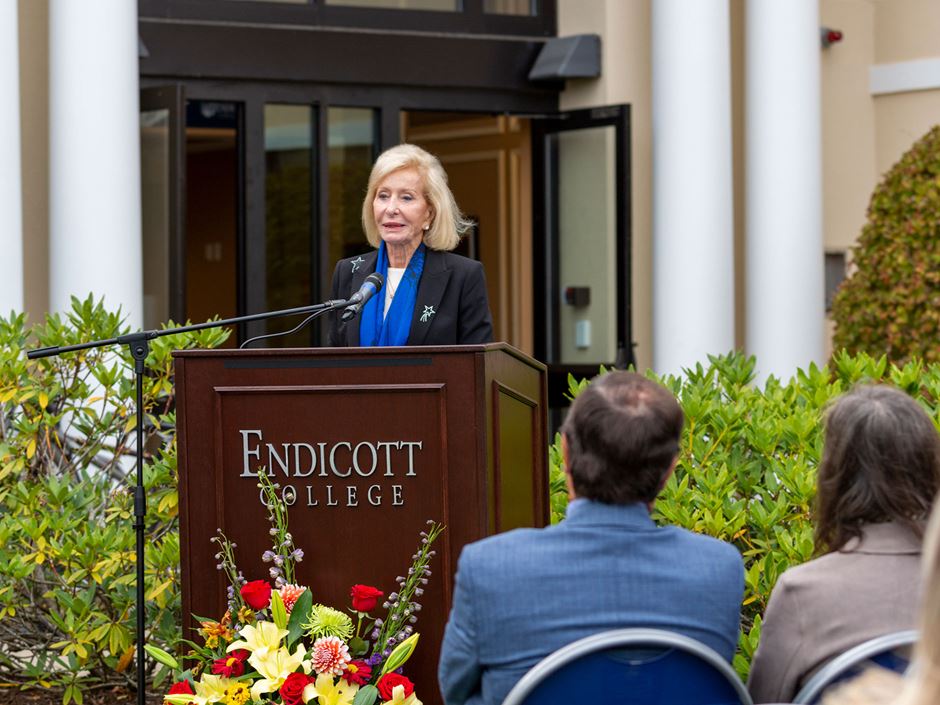 Myrt Harper Rose ’56 has pledged $1M through the Spread Your Wings: The Campaign for Endicott College.
By: Megan Tkacy

For a living, breathing representation of the word “fearless,” look no further than Myrt Harper Rose. After graduating from Endicott in 1956 with a degree in interior design, Rose has lived a life without expectations or limitations.

She’s been a ski bum in Colorado. She’s worked in Las Vegas. She’s gone scuba diving for treasure in the Bahamas. She’s even ridden an elephant in Florida while wearing a flesh-colored bodysuit to create the illusion of nudity. She's even—accidentally—flown through President Barack Obama's airspace.

But after all these adventures spanning the globe, she still looks back at her time in Beverly as the start of it all, the place where she truly found herself.

“I needed this lovely, beautiful place,” Rose said of Endicott. “It was a step into being a person. I grew up there.”

Honoring her roots at Endicott, Rose has pledged $1 million to her alma mater through Spread Your Wings: The Campaign for Endicott College, permanently endowing and naming the deanship at the School of Education and providing discretionary funds for sustaining and enhancing the school’s excellence in training future educators.

Though it’s been more than 60 years since she was an undergraduate living in Tupper, in a room “overlooking the water,” she said, “I wanted to see now what they can do with it, and I’m so happy to see what the school is doing. It’s wonderful to experience the growth and the path they’re taking.”

Hailing from Orange, a small town in western Massachusetts with a population under 8,000, Rose said that her parents viewed attending school on the North Shore as a growth opportunity. In Beverly, a city that nearly 30,000 people called home in the 1950s, Rose was exposed to new people and a different pace of life. But, most importantly, she gained a stepping stone to her chosen career.

“It put me in a whole group of people other than my small town, people from all over the Northeast basically at that time,” Rose said. “It opened doors to where I could wander or go in life. It opened my eyes to many things, and I realized I wanted to do something in the art world.”

After graduation, Rose trained as a silversmith and continues to express herself through painting and other art forms. She also taught art for 12 years at a school for first- through eighth-grade students. And she’s remained involved with Endicott, both as a member of its Board of Trustees and as a generous donor.

“I want to give the money because I want to see what good it can do,” she said. “I love being involved in the College; I love to see it evolve.”

Rose noted that she came from a generation where getting involved was deemed important.

“I grew up in a different era, but I do think the basics of what I grew up with, of how important involvement is, need to be put into this world,” she said. “Because the world is changing so fast, and it needs a lot of solidity. I think my era was solid.”

While Endicott certainly gave her the tools and inspiration to soar—both figuratively and literally, as she’s a certified pilot who still flies from time to time—Rose admitted that she’s still figuring out this thing called life.

“I had no idea what I wanted to do back then. I admire these people when they’re 12, 14, 15, 16, and know exactly where they want to go. I had no idea, and to this day I probably still don’t,” she said. “I wasn’t the best at anything, but I did a lot of things, interesting things, and met a lot of people.”

As Rose looks to the future, she’s excited to continue exploring her passions.

“There’s still a lot out there that I haven’t even tested yet,” she said. “I’d still like to play with elephants, little baby elephants. Wouldn’t you?”

Learn more about Spread Your Wings: The Campaign for Endicott College and ways to get involved.