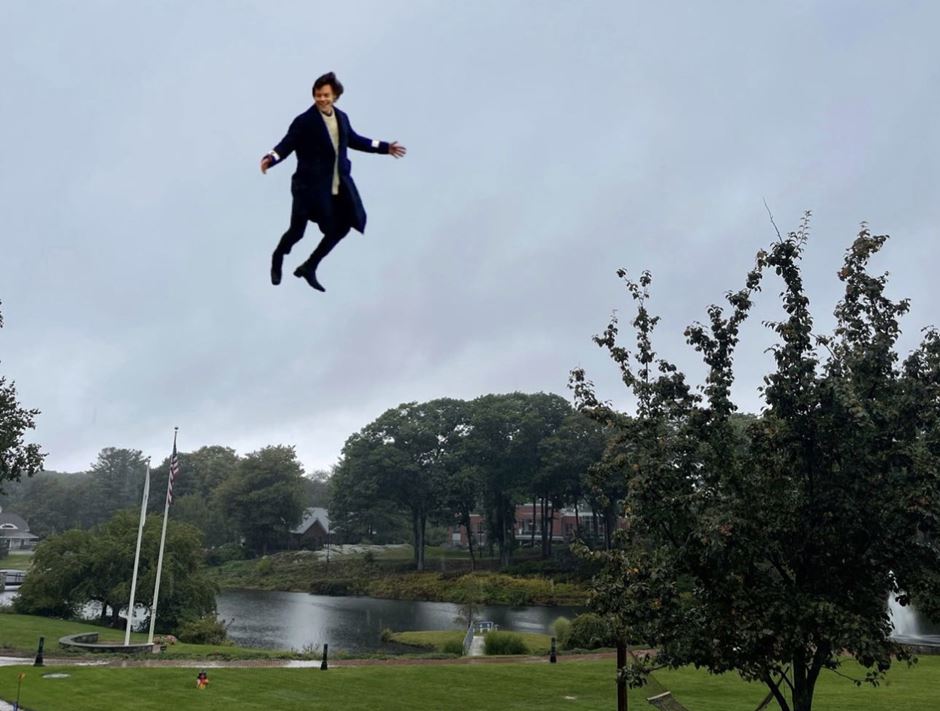 Harries for Endicott is working hard to become a club on campus, aiming to bring students together through a love of musician Harry Styles.
By: Madison Schulman

Can you imagine world-renowned superstar Harry Styles looking for books at Halle Library? How about getting a coffee from Einstein Bros. or even working out at the Post Center?

When Cafarelli transferred to Endicott during her second semester as a first-year student, she began Photoshopping the musician into several places around campus.

Taking inspiration from a similar account at her old school, the communications major and longtime Styles fan posted the photos on an Instagram account in April of 2022. 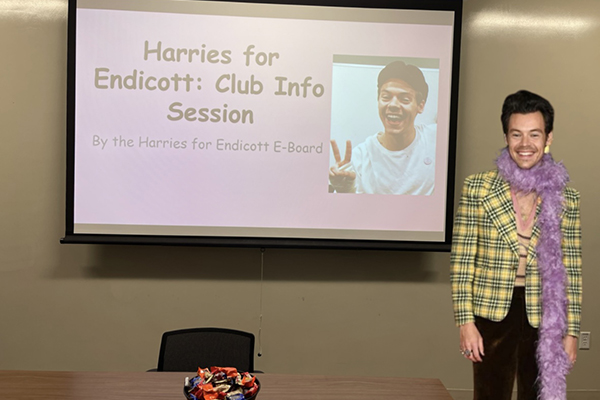 “He’s helped me discover who I am and become more comfortable in my skin, and he preaches treating people with kindness,” said Cafarelli, who postered campus with cheeky flyers announcing the Instagram account. “He’s a great role model for a lot of people in becoming more comfortable in their identity and who they are.”

Harries for Endicott immediately became popular with students. (“Harries” is a term used to describe his fan base.)

“I wanted to bring a community of people together that had a similar interest, and to help people that may be going through a tough time in their adjustment to college,” said Cafarelli.

The account has steadily grown, though Cafarelli said she didn’t realize the account would get this much attention, something that has brought her immense joy.

“It’s brought me some new friendships and allowed me to meet a lot more people across years
on this campus,” said Cafarelli. “I’m just really inspired by the little community that we’ve created on campus of people that have a mutual interest.”

But Cafarelli didn’t stop there.

On the way back from seeing Styles at Madison Square Garden in New York over Labor Day weekend, she noticed a group of Endicott students on the train ride back. Cafarelli introduced herself to the group, one of whom was Emily Reedy ’24.

Ironically, Reedy had followed the Harries for Endicott account when it started last year. The graphic design major had been a One Direction fan, but was only introduced to Styles' solo music by her roommate last year. The two would watch his live streams of his first tour on their T.V., Reedy explained.

“I think there's just something about Harry Styles that brings this joy and energy into a room,” said Reedy. “Just loving the same person and loving the same music, a different feeling.”

Shortly after meeting each other on the train, Reedy saw a Harries for Endicott post that looked oddly familiar—a picture of Styles’ Labor Day weekend concert, from the same section Cafarelli was in.

“I was like, ‘That’s you? You’re Harries for Endicott!’” said Reedy. “She’s like, ‘You uncovered my secret!’ I just think it’s so funny.” 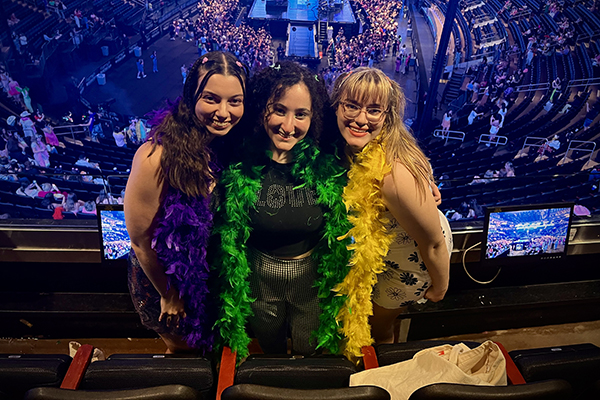 Cafarelli broached the idea of starting a Harry Styles club with the group of “Harries” on campus.

The idea took off in October 2022. Cafarelli deemed herself President, and created an e-board, of which Reedy is Vice President. She next secured an advisor in Sophia Valiante, Assistant Residence Director for Brindle, Hamilton, and Wenham Halls.

The “Harries” are working to gain full approval and club status from the Student Government Association in spring 2023.

“I think it’s an important group because it can bring people together of all grades, of all different majors, different genders, ethnicities, sexual orientations,” said Cafarelli. “Just something that anyone can come together if they like Harry Styles.”

The first gathering of Harries for Endicott proved Cafarelli’s point. When the group met together in their Styles merchandise at the beginning of November, students from every grade were present, said Cafarelli. Reedy called the get-together a resounding success.

During the meeting, the group discussed their plans for their possible club in the future, and met the e-board. They watched My Policeman, an Amazon Prime original starring Styles.

Cafarelli said her future goal is to host one event every month and the group is in the process of establishing a newsletter. The group also wants to host a few events closer to Christmas, possibly ornament decorating or a paint night. Collaborations with other clubs on campus are also an idea, such as the graphic design club, of which Reedy is the Secretary.

“We are hoping to turn our following that accumulated online into a firm organization that will get to know each other well,” said Cafarelli.

Like Styles’ song “Treat People With Kindness,” Reedy said anyone who wants to join the future club is welcome—Styles fan or not.

“I want this community to create a long-lasting legacy within Endicott College, so people can come together over something that they mutually love,” said Cafarelli. “I know there’s a lot of other people on this campus that love him as much as I do. So, to bring people together that have a common interest [over] someone that's so inspiring as him is my ultimate goal.”