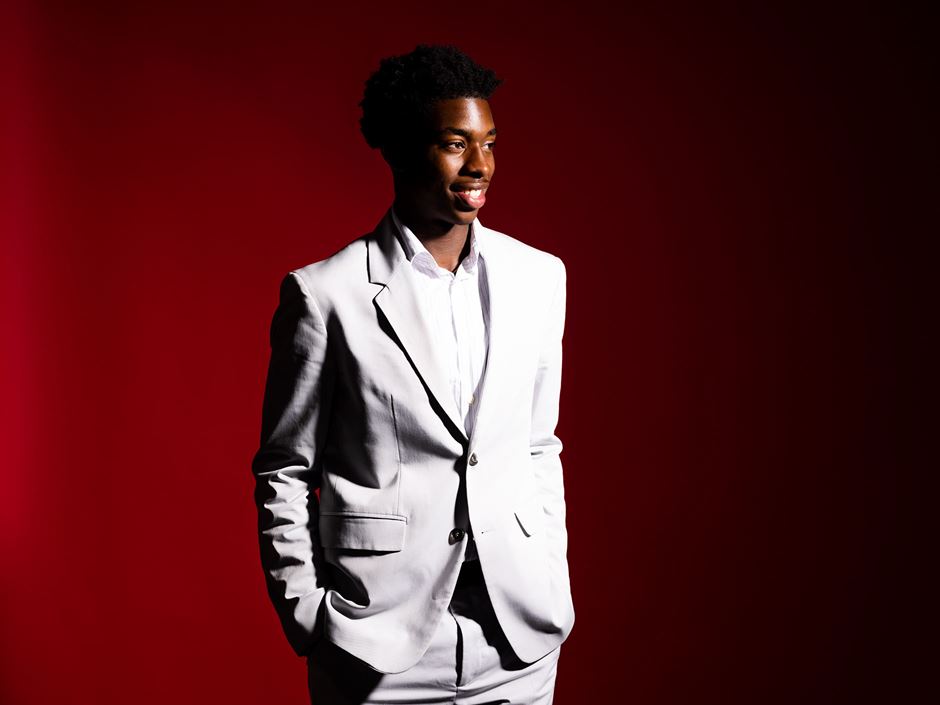 KyRon Parker ’25 is already a positive influence at Endicott, and he’s just getting started.
By: Megan Tkacy

“I love to be around others, love to make other people smile,” confessed KyRon Parker ’25, a New Jersey transplant majoring in criminal justice and minoring in marketing.

Just 17 when he arrived at Endicott, Parker was immediately eager to bring good vibes to Beverly. And thanks to Endicott’s Inspire Scholarship for first-generation students, that’s exactly what KyRon is doing.

“What I noticed is a lot of people walk with their heads down,” said Parker. “Where I’m from, and the school that I went to, everybody would say, ‘What’s up?’ or give each other hugs. I definitely feel like the energy I bring makes people smile.”

Parker, whose first name is a mashup of his mother’s (Karen) and father’s (Ronald) names, didn’t go to any old high school—his alma mater is Newark’s Saint Benedict’s Preparatory School, a Catholic K-12 institution once featured on “60 Minutes.” His older brother attended the nontraditional school, back when it was an all-boys establishment.

“It was like a brotherhood in a way,” Parker said of the student-run school that is overseen by a headmaster. “We have a code that we go by: Whatever hurts my brother hurts me, whatever helps my brother helps me. They taught me a lot about leadership.”

At Saint Benedict’s, Parker was made a student group leader. “I had to advise over 20 students—a variety of classes, freshmen and seniors—and help them with their grades and things like that,” he said. “The people who struggle, we bring them up, help them out. You never want to leave your brother behind.”

The school uniquely equipped Parker for Endicott, requiring that he participate in sports, maintain his GPA, and finally, embark on an intense outdoor excursion. Parker believes his high school experience directly led to his current roles as an Endicott tour guide and orientation leader. “Not a lot of people have the same experience I had with the school I went to. I got pretty lucky,” he said. “I definitely want to be an inspiration to others. Just giving back, that’s the big thing for me. Give back.”

Through the Inspire Scholarship, students like KyRon receive financial aid and benefit from Endicott’s innovative experiential, professional, and liberal arts curriculum. His mission to pay it forward extends beyond the Beverly campus.

“I definitely want to be a community cop,” said Parker. After interning with the Revere Police Department, Parker’s career goals crystallized. “I want to start back with the community, walk around and really inspire kids—little kids especially because they could be our future cops, our future lawyers, our future.”

“I really want to work in an urban community,” he continues, noting that those areas are in more need of inspirational figures. Working with the FBI would also be a dream job for him. At his previous internship, “they took me to the FBI building and showed me around, introduced me to one of the recruiters, which was pretty amazing,” he said. “It confirmed that I really want to be a criminal justice major. I definitely learned a lot from that.”

While he may be among the first in his family to pursue a bachelor’s degree, Parker has learned a lot from his older brother and parents. “At a young age, my father taught me how to be independent and how to handle situations,” he said.

Meanwhile, his mother encouraged him to head to Massachusetts for college.

“One thing she said that really made me pick Endicott was that the school produces high-level workers and future directors of companies,” Parker said. “Endicott builds you up with all the internships and activities you do on campus.”

With a future career in mind and internship experience already under his belt, Parker is grateful for his parents’ influence and for the opportunity to attend Endicott. “Going to a school in-state, my parents thought it would just be a lot of trouble in a way, just because I know too many people, I would be home a lot and things like that,” he shared. “They wanted me to expand my horizons and go to a school where the culture is different. They wanted me to learn from that.”

“I definitely made the right decision,” Parker added. “They were right.”

Now in his sophomore year, Parker has some advice for fellow students: “Keep your head strong. Always think positive, never negative, and stay on the right track. Be an influence for others, and always push others to be the best they can be. You got this, and don’t let anyone say you don’t.”

If you are interested in learning more about how you can support students like KyRon through the Inspire Scholarship, contact Anthony Barbuto, Associate Vice President of Institutional Advancement at abarbuto@endicott.edu or 978-232-2362.