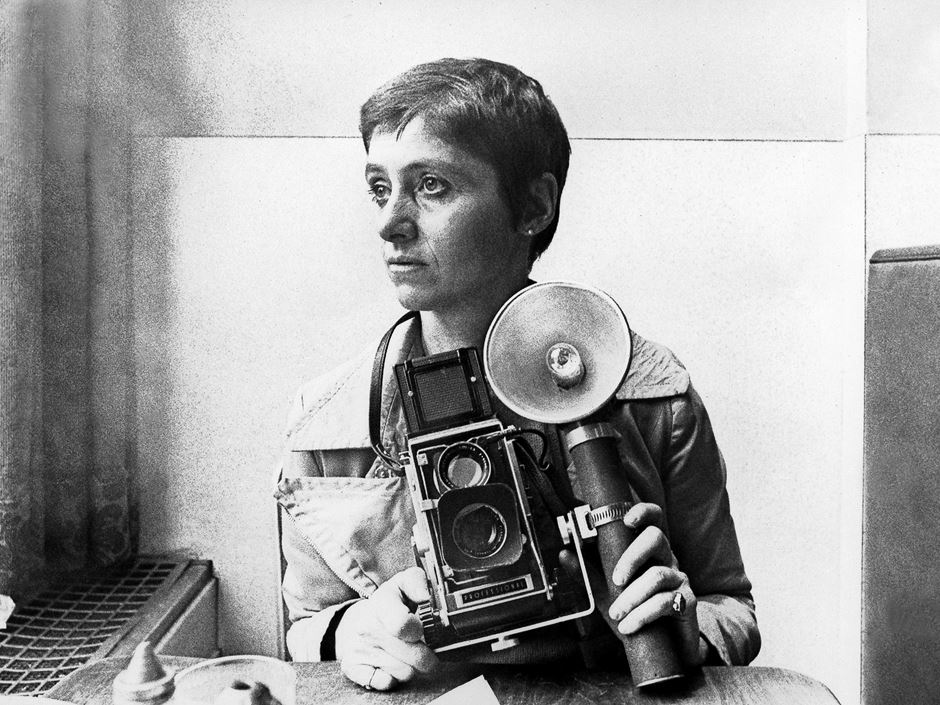 As digital photography continues to evolve, it can seem like authenticity has become a lost art.

Elizabeth Bollenberg, Gallery Director at the School of Visual and Performing Arts, hopes to bring a dose of radical realness to the community with Diane Arbus: 10 Years: Masterworks from the 1960s and 70s, on view in the Heftler Visiting Artist Gallery of the Manninen Center for the Arts from September 23 through November 11.

The traveling exhibit features 28 photographs by renowned mid-20th century photographer Diane Arbus, who specialized in representing those considered to be on the outskirts of society.

“This exhibition is the very first showing of this collection,” explained Bollenberg. “It’s a brand-new exhibit that’s been worked on since 2021.”

Diane Arbus: 10 Years highlights a select few of the thousands of photographs Arbus created during the apex of her career—a radical departure from her earliest work. In the 1940s, she and her husband Allan Arbus (of M*A*S*H fame) photographed fashion models for magazines such as Glamour, Seventeen, and Vogue. Although she found success in her work, Arbus found it to be a chore.

“Diane was the one who would come up with the concept,” Arthur Lubow wrote in the biography Diane Arbus: Portrait of a Photographer. “By the time a session took place, once she adjusted the hair and the skirts, her job was mostly done. She would slink along the sidelines, snapping pictures with her 35mm camera, while Allan, placing his head beneath the cloth of the view camera, shot 8x10 film. It was obvious to everyone that Allan was the professional photographer, Diane a dilettante.”

Beginning in the mid-1950s, Arbus stopped working at the studio and began combing the streets for new subjects. Soon, she was photographing nudists, men covered head-to-toe in tattoos, drag queens, and people with mental and physical disabilities.

“She said that they were as amazing-looking as movie stars,” Lubow wrote of her fascination with traveling circus performers, “and yet, unlike celebrities, they had not been photographed incessantly until a coating of defensive shellac masked them.”

Unlike Arbus’ poised and heavily planned-out commercial work, her new subjects were photographed naturally in their homes, neighborhoods, and places of work. Each of her profiles was captured in stark black-and-white on gelatin silver prints.

“She sought out those who in polite society would not be acknowledged—those on the fringe of representation of those overlooked,” explained Bollenberg. “She would go to carnivals and photograph conjoined twins in a dignified and empathetic way.”

The years 1961 through 1971 were a revolutionary time for Arbus and the nation at large. Within the decade, Arbus would have her work featured in the exhibit “New Documents” at the Museum of Modern Art and she received a fellowship from the Guggenheim Foundation for her photography project, “American Rites, Manners and Customs.” Not to forget, the Civil Rights movement was underway, President John F. Kennedy was assassinated, and millions watched the ongoing Vietnam War broadcast live on television.

“My mother graduated in 1971 and they were hearing the body counts every night,” recalled Bollenberg. “There’s a lot of mass broadcasts of dramatic things happening and [Arbus] was in the upswing of that too. Things were out of control and she had a part to say in all of that.”

The 28 photographs featured in Diane Arbus: 10 Years provide an intimate snapshot of how certain subsects of American society lived their lives while the world drastically changed around them. The titles for the photographs are often blunt descriptions of what’s depicted: “Seated Man in a Bra and Stockings, N.Y.C., 1967”; “A Family One Evening in a Nudist Camp, P.A., 1965”; “A Woman With Her Baby Monkey, N.J., 1971.”

“Arbus’ direct approach blends and borrows from street photography, the portrait, and documentary tradition, and the snapshot aesthetic,” said the exhibit’s curator, Catlin Langford, in a prepared statement. “Through Arbus’ work, we as viewers must confront our voyeuristic fascination with those existing outside of society’s conventions.”

Arbus died in 1971, but her work still finds itself on the cutting edge of contemporary culture.

“There’s something to be said about photography then versus now with the advent of Photoshop and editing. I think the truth is kind of hard to figure out now,” said Bollenberg. “The most intriguing thing about her work is how relevant it feels now more than ever … This exhibit—51 years after the artist passed—is so important because the subjects and topics resonate in our current national dialogue.”

A public opening reception for the exhibit will be held on Friday, September 30, from 3:30–5:30 p.m., in the Carol Grillo Gallery. At 4:15 p.m., David Haberstich, Curator of Photography at the Archives Center of the Smithsonian National Museum of American History, will present a lecture on Arbus at the Rose Theater of the Manninen Center for the Arts.

“She seemed to be on a quest to seek out the strange and bizarre, and roamed New York with her cameras, both in broad daylight and late at night,” said Haberstich in a prepared statement. “Her life and work constitute one of the strangest stories in the history of 20th-century photography.”

The September 30 reception is free and open to the public. Learn more about Diane Arbus: 10 Years: Masterworks from the 1960s and 70s.