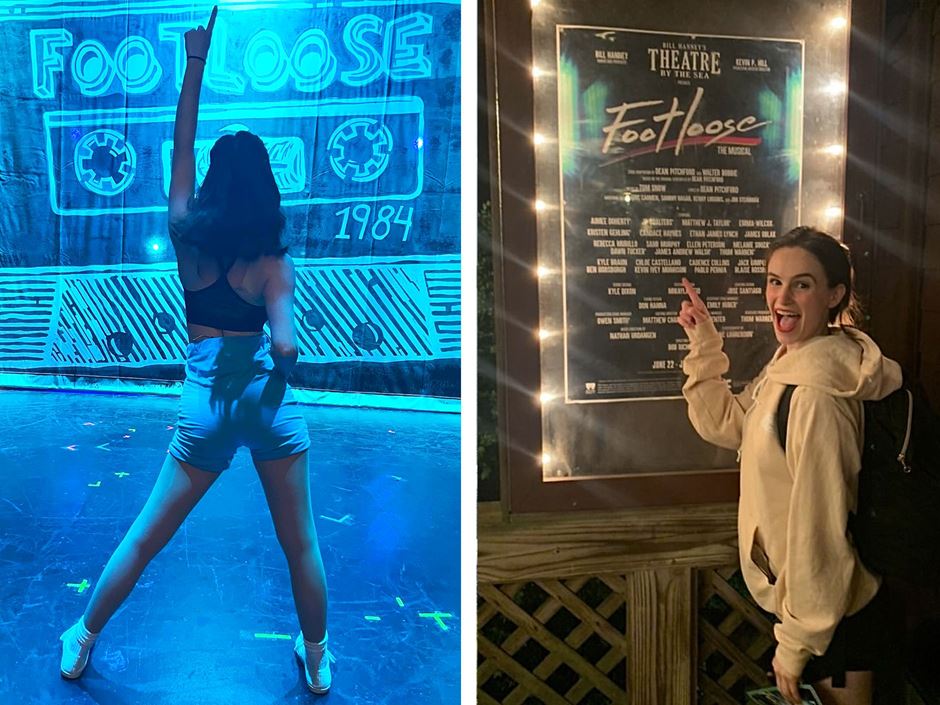 Chloe Castellano ’23 was starring in Endicott’s production of The Rocky Horror Show when she got an offer to perform in two legendary musicals this summer.
By: Sarah Sweeney

Most actors struggle for years before booking exciting jobs, but for Chloe Castellano ’23, a series of bit parts, understudy opportunities, and ensemble gigs are preparing her for the bright lights, big screen, and even a fall internship in New York City.

Castellano is spending the summer in Wakefield, R.I., living and breathing theater. When she’s not on stage, she’s living in a shared staff house behind Theatre by the Sea, where she’s part of the ensemble and understudy casts for Footloose—which ends its run on July 16—and Cinderella, which opens on July 20 and runs through August 13.

A native of New Boston, N.H., Castellano wasn’t always a theater kid, but she was a natural performer. She started as a dancer, took up the flute, and, after attending her sister’s middle school theater productions, decided on a lark to try out for a high school production of everyone’s favorite Disney classic: The Little Mermaid.

“Who wouldn’t want to do The Little Mermaid, right?” laughed Castellano. “If it was any other show, I don’t think I would have auditioned, but I knew the story. And, after playing flute for 10 years, I was confident enough because I was already familiar with music—but I had never really sung for people before.”

For two weeks, she locked herself in her room, playing songs on the piano and teaching herself how to sing. When she landed the role of Flounder, which she’d hoped for all along, she was thrilled.

But it wasn’t until coming to Endicott that her theater dreams crystallized into something that seemed attainable in the real world. Castellano had seen a 2019 Soundings article about David Aranjo ’17, who was starring in the North Shore Music Theatre’s production of Mamma Mia! at the time.

“I saw that article and thought, ‘If he can do it, so can I,’” she remembered. “My goal was to book something with the North Shore Music Theatre family before I graduated from Endicott.”

The pandemic hindered her participation, beginning with the halting of the College’s 2020 production of Legally Blonde. Castellano next joined the 2021 production of the student-authored Work in Progress before this year’s The Rocky Horror Show. Castellano called that experience “just magical for me.”

“Because I’ve always seen myself as more of a classical dancer and more into the classic musicals like Oklahoma!, getting to be dirty, gritty, and on the floor for Rocky Horror was such an eye-opener and just made me appreciate theater even more,” she said.

While backstage at Rocky Horror, Castellano received a text from her dance instructor Briana Fallon of Danvers-based Refine Dance Studio.

“She knows I want to do all this professionally, and she says, ‘Hey, I have a gig for you if you want to apply for it, but you’ve got to apply ASAP,’” she said. “So, I’m sitting backstage at Rocky throwing videos together and making sure my resume is ready!”

That gig, at Theatre by the Sea, meant missing a preexisting dance commitment and even her parents’ 25th anniversary (they’ve thankfully rescheduled the party). It also meant nightly work, on back-to-back productions, and a summer of memorization. Hardly relaxing.

“I’ll go into Footloose sometimes and I’m like, ‘Wow, I’m really tired today,” she said. “But then once the numbers start, and once I get into it, I’m like, ‘I’d rather be tired doing this than sitting at a desk because I truly love this.’”

After summer, Castellano is off to New York City for a semester-long internship studying musical theater at the New York Film Academy.

“I’ll be doing voice lessons, technique classes, and a lot of networking,” she said. “I’m super excited about making New York my campus.”

When she returns to Endicott in the spring, she hopes to take part in the spring production—and have another gig lined up post-graduation.

“I love to do what I do and I’m not stopping here. I want to finish school and throw myself out there,” she said. “But Theatre by the Sea is a great place to start. I get to spend all day in rehearsal, sinking my teeth into one show. And then I come back and do another show. It just feels like this is where I want to be.”