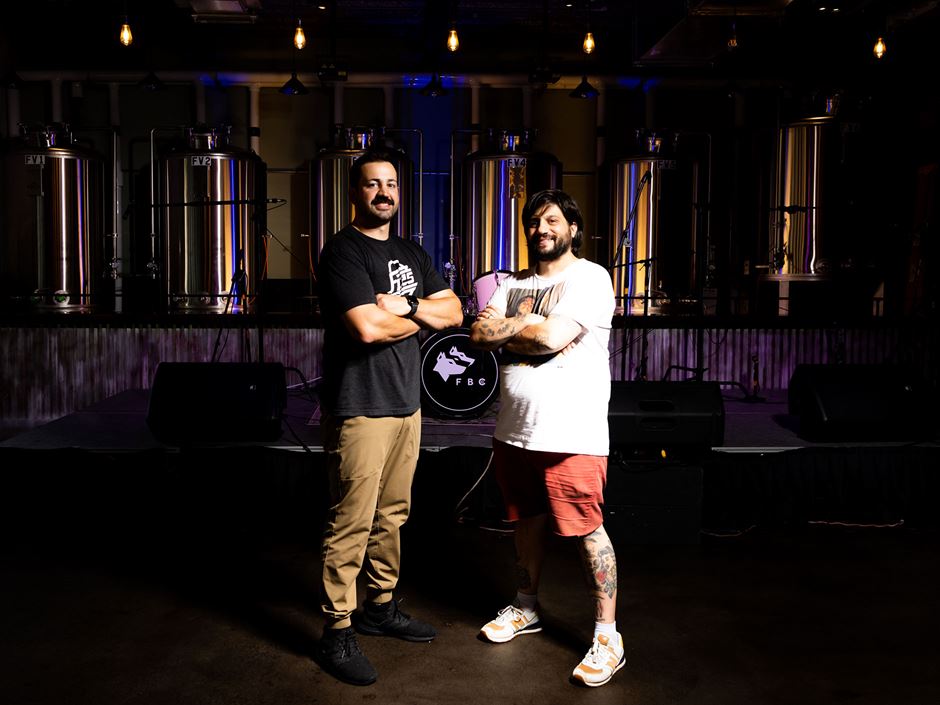 At Faces Brewing Co. in Malden, the beer doesn’t just flow but the tunes do too, thanks to two alumni keeping the local music scene alive and thriving.
By: Sarah Sweeney

For Ryan Agate ’03, booking bands is an old labor of love that took off right here on the North Shore.

Growing up, Agate divided his time between two primary activities: Going to punk shows and trying to escape Manchester, N.H. At Endicott, he found what he was looking for—mostly.

“The campus just spoke to me,” recalled Agate. “When I got here, I was like, ‘This is great. But where’s the music happening?’”

While on the hunt for a local music scene, Endicott’s internship program was a surprising help. While interning at the now-defunct Gloucester-based Art Space—an afterschool program that offered art classes and doubled as an all-ages venue at night—Agate both honed his design skills and started booking the bands he desperately missed. 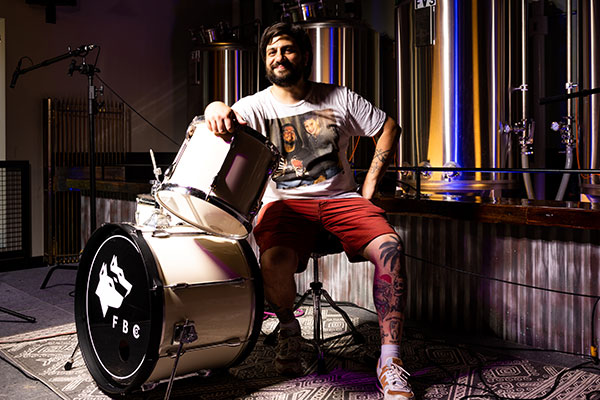 “My old band would play there, too,” said Agate, who forged lasting friendships and connections with musicians he booked at the Art Space. When he wasn’t working or in class, he was attending concerts in Beverly, Boston, and beyond, and jumpstarted his own radio show at the (also now-defunct) WNSH AM 1570.

“I’d have bands come down and play on the AM station. I’m still friends with those bands and still hang out with them,” said Agate.

Nearly 20 years since graduating from Endicott, Agate has built on the side hustle he started here, continuously booking bands for some of Boston’s heavyweight venues including O’Brien’s Pub, the Middle East, Great Scott, Charlie’s Kitchen, and the Sinclair.

“It was such a small world that opened up at Endicott,” he said.

Agate is now Associate Director of Communications for Dana-Farber Cancer Institute’s Jimmy Fund. But, at night, after he wraps his day job and the kids go to bed, he flips open his laptop—to design flyers and correspond with the indie and punk bands he’s booking. Only this time it’s for alumni-owned Faces Brewing Co., in Malden, Mass.

Co-owned and operated by a troupe of brothers, including Anthony Martignetti ’13, Faces Brewing is a sequel in the Faces franchise—Martignetti’s family was behind Cambridge’s legendary Faces nightclub, which shattered hearts when it closed in the ’90s.

Faces part two debuted in 2020, just as the pandemic hit. But thanks to an outdoor beer patio and a sprawling space, the brewery not only survived COVID dining restrictions, but last year added music to its repertoire of IPAs, pilsners, and lagers, too.

That’s also when the city of Malden kicked off a summer festival with live music. “I reached out to the city manager to say, ‘Hey, if you need help, this is one of my areas of expertise. I love booking live music,’” said Agate.

The acts were already solidified, but his email led to an introduction with musician Bob Logan, who told Agate about a brewery down the street that wanted to expand into music.

“We walked down, took a tour, and I started booking shows,” said Agate. “We really hit the ground running. Our first show was in October but, since March, it’s been at least one show a month. But we have six this week—we’re keeping the staff busy.”

When Agate first started at Faces, he had no clue that he was partnering with another Gull.

That’s not the only thing they have in common, of course. Music is their life force.

“The Boston area is a great place to be a music fan, and now Faces is helping keep the local scene alive and thriving,” said Martignetti, a former sport management major. “Through Ryan’s hard work here, we’ve quickly built a live music culture at the brewery.”

That culture is important to Martignetti, since many smaller venues shuttered during the pandemic.

“It’s always felt like there are too few venues for the number of bands around here, but it became really dire in the post-pandemic landscape,” he said. “We had the perfect space that could double as a concert venue and we recognized the need for more venues.”

Starting a brewery is a daring move, let alone opening one during a pandemic. But “former Gulls finding success shows the strength of the curriculum at Endicott College,” acknowledged Martignetti. “Networking has been a monumental component of Faces’ success and is the main initiative of the internship program that Endicott has imparted in its students.”

Networking is also the backbone of Agates’s work. With decades of experience under his belt, he prides himself on knowing which venue works best for a band and still consults with various venues and promoters around Boston.

“I’m working hard on that with Faces because it’s new, so I don’t want to bring the mosh hogs, who are going to smash stuff, you know?” he joked.

That’s the mentality of a married father straddling 40 whose priorities have understandably shifted. But every punk eventually grows up, after all, even if it means an address in the ’burbs.

For the past six years, Agate has also resided in Malden, a changing city that’s been perpetually up and coming. “But finally we don’t have to say that anymore,” said Agate. “People know.”

On the nights when Agate heads to Faces for the shows he’s coordinated, he only has to walk a few blocks. Gone are the uproarious all-nighters with bands, the cheap beer in dingy, dank clubs.

“It’s so familial at Faces, not just because they’re family, but the bar staff, the hostesses, everybody feels like a family member all the time,” said Agate. “It’s so warm and inviting.”

Not that O’Brien’s wasn’t, Agate is quick to add. “But this definitely feels like growing up. It’s a Blink-182 song all over again.”