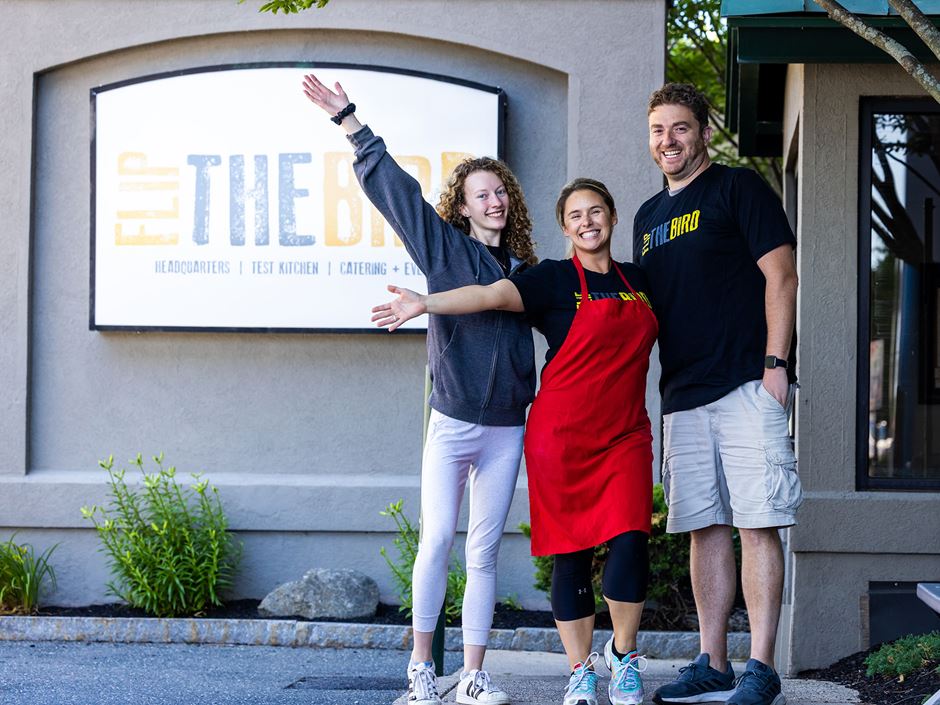 Torie Farnsworth ’07, co-owner of North Shore-based Flip The Bird, is helping to put fried chicken sandwiches on the map.
By: Sarah Sweeney

Move over roast beef. When it comes to classic North Shore fare, Torie Farnsworth ’07 is helping to put fried chicken sandwiches on the map.

Farnsworth, a graduate of Endicott’s interior design program, is a co-owner of Flip The Bird, the popular North Shore eatery that’s expanded from Beverly to locations in Danvers, Swampscott, and most recently Salem. But Flip The Bird’s roots can be traced right back to Endicott.

While an undergraduate, Farnsworth met Beverly native and chef Anthony Marino through her classmates who attended high school with Marino.

Growing up in Maine, Farnsworth had worked in her share of restaurants over summer breaks. “It was so stressful,” she recalled. So much so that Farnsworth made two vows: Never to work in a restaurant again and to never date a chef.

“I sealed my fate that day,” she said.

Soon, she and Marino were dating, but when Marino started talking about opening a restaurant, Farnsworth recoiled.

“I told him he was nuts,” she said. “I was planning on going back to school for horticulture and doing landscape design. But Anthony was like, ‘I really want to do this.’ So, I said, ‘I’ll help you, but I want nothing to do with this thing.’”

That feeling wasn’t exactly new, either. As a student, Farnsworth accepted an internship with a design firm outside Boston but found herself confined to desk work, longing to get out in the field.

“By day three I was driving into work and I was like, ‘this is not for me,’” she said. “I just can’t sit at a desk all day. I just melt into my chair and die. If I stop moving, I just want to sleep.”

But the beauty of Endicott’s renowned internship program isn’t just finding the perfect career fit—it’s learning what you don’t want to do.

Turns out, Marino had a café in mind, which eased Farnsworth’s fears and flashbacks of those hectic Maine summers serving an endless stream of vacationers.

When Marino’s café—aptly called Marino’s—opened in 2008, Farnsworth immediately knew her role, thanks to a semester designing a restaurant at Endicott.

A sandwich is born 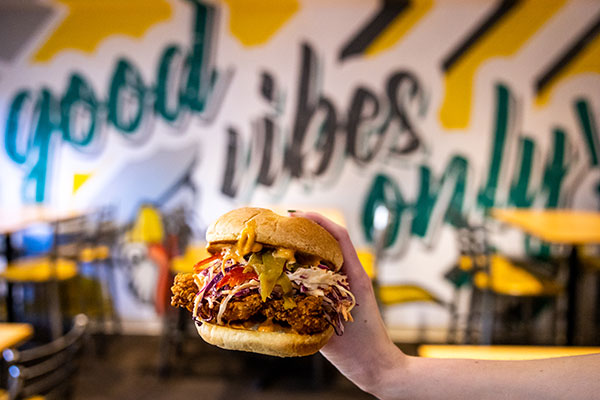 After six years at the café, Marino put a fried chicken sandwich on the menu that became an instant classic with customers. But that was only the beginning.

When the building housing Marino’s was sold, the duo found a home for the café at the Cummings Center in Beverly.

“We realized that Fridays weren’t very busy here because everyone wants to get out of the office for the weekend early. And we were like, ‘How can we make them stay?’” said Farnsworth.

They decided to make Marino’s fried chicken sandwich and sell it exclusively on Fridays. They called it, of all things, Fried Chicken Friday. The orders flooded in.

There was only one problem—a single fryolator. The pair couldn’t keep up with demand and in 2019 they opened the very first Flip The Bird location on Cabot Street in Beverly. There, Farnsworth drew upon her unique skills—her interactive personality and her Endicott background.

“Anthony’s better in the kitchen—he likes to be in the back doing his chef thing and being creative,” she said. “Also, the design part of it goes directly with my Endicott education. I knew how to set up the front-of-house.”

Aside from the aesthetics of a space, part of Farnsworth’s semester designing a restaurant taught her about occupancy and the need to be flexible to accommodate large groups, all knowledge that she infused into Flip The Bird.

In the summer of 2020, Marino and Farnsworth opened a Swampscott outpost, also born out of high demand.

“We never thought for a moment that we were going to do even a second location,” said Farnsworth. “But after the first year, it was so busy. We were getting so many online reviews saying, ‘I can’t get in there. It’s a two-hour wait for a sandwich!’”

While New England cuisine is known for a lot of things—seafood, clam chowder, Dunkin’ Donuts—it’s not known for spice.

But Marino is actively changing that.

“A lot of restaurants won’t actually go for the spice. They bow out at the last second. But Anthony said, ‘No, I want people to regret ordering this,’” said Farnsworth, laughing. 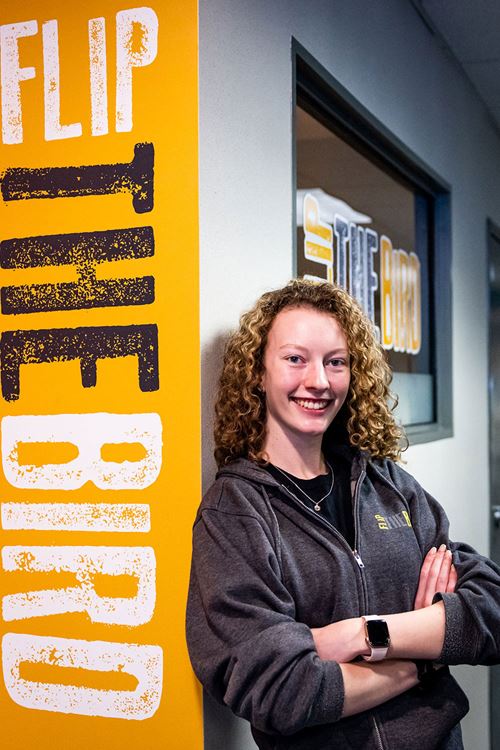 The Nashville Hot boasts a little heat, while the Angry Bird takes it up a notch with “angry dust”—a touch of fiery habanero—while the Cry Bird throws ghost pepper into the mix. (Some customers report that the Cry Bird even cured their COVID-induced loss of smell and taste.)

Flip The Bird’s menu has something for everyone—including spice-averse folk—but soon, it’ll also have chicken tenders (exclusive to the Salem location). And with Flip The Bird’s North Shore expansion, Farnsworth and Marino are also keeping the Endicott connection alive through Marketing Manager Leah Phillips ’21.

While at Endicott, Phillips worked at Marino’s before interning at Flip The Bird, where she helped with marketing efforts.

“She did such a good job at her internship that I was like, ‘Can you come work for me?’” said Farnsworth.

“I’ve always been very creative and crafty with a bunch of design stuff. So, I like getting to pick [Farnsworth’s] brain about that, too. It’s fun getting to create content,” said Phillips, who revamped Flip The Bird’s website and runs the restaurant’s drool-worthy Instagram account.

She and Farnsworth work closely, so it’s a no-brainer that they’ve also become friends, and just recently returned from an Outlander tour in Scotland.

Birds of a feather, after all.