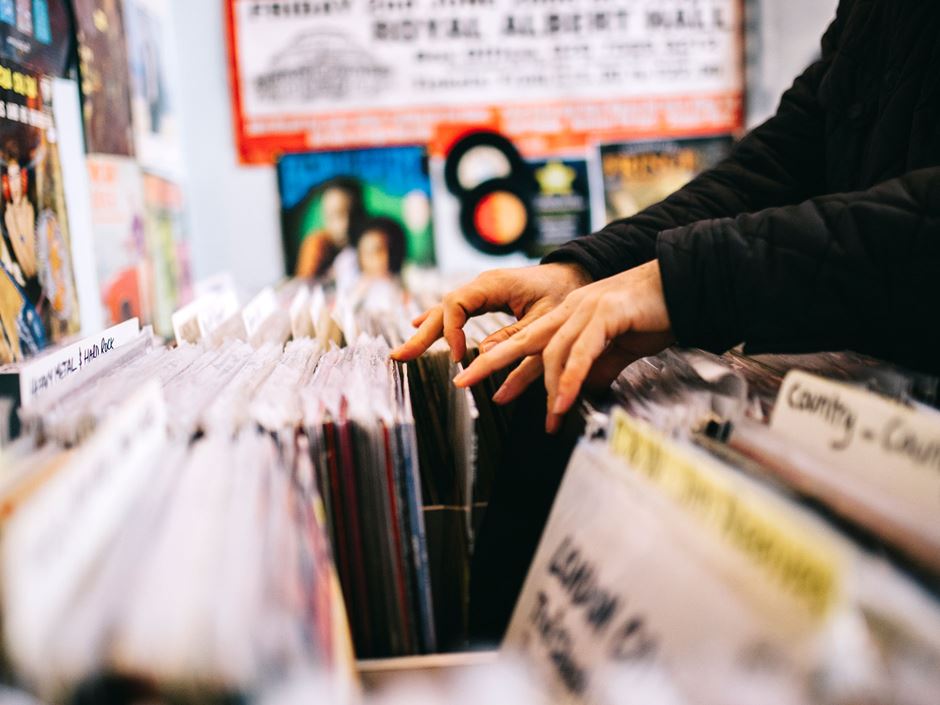 When it comes to pop culture, everything old seems to be new again. From Top Gun: Maverick to the Rolling Stones on tour again, we chatted with Endicott Professor Hugo Burnham to understand this phenomenon more.
By: Sarah Sweeney

Nearly 40 years since its release, a 1985 Kate Bush song is topping the music charts thanks to the Netflix sci-fi horror saga, Stranger Things, a back-to-the-’80s thrill ride featuring Winona Ryder and a slew of fresh faces and coming-of-age storylines that have resonated with audiences everywhere.

The popularity of Stranger Things, which debuted in 2016, proves that the past is also personal. From Top Gun: Maverick to Showtime’s ’90s-inspired Yellowjackets to the Rolling Stones’ 60th-anniversary tour, nostalgia-inspired entertainment seems here to stay.

To further understand this phenomenon, we chatted with Assistant Professor of Experiential Learning and Internship Coordinator Hugo Burnham, also the founding drummer of Gang of Four, a groundbreaking post-punk band that returned to the road on a comeback tour of its own earlier this year.

This interview has been edited for length and clarity.

Everything old seems to be new again—no offense! Your band, Gang of Four, launched a tour this spring and didn’t skip a beat with audiences. Now, the Rolling Stones have embarked on a 60th-anniversary tour. When we last spoke, you were adamant that Gang of Four was no nostalgia act, which makes sense. There’s a lot of fire and political passion in Gang of Four’s oeuvre, whereas the Stones—to me—are that classic, roguish, from-the-gut rock ’n roll band. What is it about the Stones—and even Gang of Four—that still resonates with audiences of all ages?

I am old. No offense taken. I can speak from my own gut to say that, while I listen to new music (not a lot, I barely have time to seek it out, so I rely on my daughter and a couple of music-mad friends to tell me about stuff), I find comfort in listening to the stuff that inspired me or shaped me many decades ago.

Growing old is hard enough, so many older people like a reminder of their youth and the music that defined it for so many of us. Plus, Jagger is a physical marvel at 78. And they put on a great show. As do we. A constant reaction from people that came to see us back in March is that we play with as much vigor as we did back in the ’70s and ’80s and again for a couple of years in the mid-aughts. And, that our lyrics are as meaningful and vital as ever … socially and politically. Sadly.

Speaking of the Rolling Stones, it was the 50th anniversary of their album Exile on Main St. back in May. I know the Rolling Stones were a big influence on you as a kid growing up in England. Can you talk a bit about that? 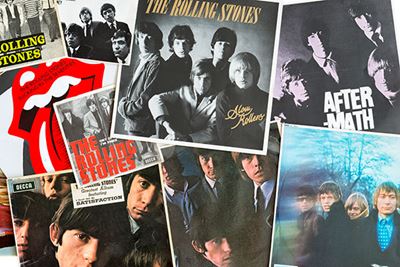 The whole family used to gather on Thursday evenings to watch the UK music chart TV show, Top of the Pops. Everybody did. My father would leap up and dance around the room when Jagger was on. He tried aping Jagger’s clap-under-a-leg-kick move while singing “Get Off My Cloud” and fell over. A glorious moment.

After Through the Past, Darkly, Let It Bleed (my favorite RS album), and Sticky Fingers, such a huge collection of songs that were all over the place stylistically just drew me in deep. And the stories in the music press about the lengthy process of making Exile on Main St. in the South of France—after starting it during the Sticky Fingers sessions in London—were mesmerizing. This was 1972 and I was 16, the apex time in a young person’s life for musical influences. I learned what “hedonism” meant!

Have you ever met any of the Rolling Stones yourself? If so, what happened?

I met my drumming idol, Charlie Watts, at a jazz show in London in the summer of 1984. His combo was opening for a popular jazz-influenced pop band called Working Week, and I was their tour manager. I came into the room and saw him setting up his own kit. I went up and introduced myself. “Oh, hullo, Hugo. Lovely to meet you. My name’s Charlie.” I’ll just leave that there.

I met Jagger at a party after a Nona Hendryx show in London. I was playing percussion for her. Jagger’s publicist, who’d worked with Gang of Four as well, introduced us. We chatted, standing at the bar for a few minutes. Everyone I knew in the room was watching, knowing this was quite a moment for me.

Kate Bush’s 1985 song “Running Up That Hill (A Deal with God)” is a number one single, thanks to the popularity of Netflix’s Stranger Things. Can you speak from personal experience about how fulfilling it is to connect with new, younger audiences, including Endicott students?

Kate was always amazing, so this renewed success is great. It constantly surprises me, in a good way, that younger people are still drawn in by what we did (and are doing), and that they are paying attention to the same crap that is affecting their lives as did ours 40-50 years ago. The crap is deeper, and I wish more people would stand out, shout out, and get mad. 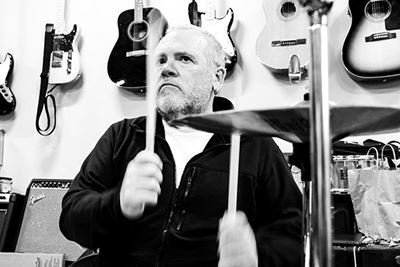 Anyway, one story from the tour was of a young woman at the Houston show, probably 15 or 16. She was right down at the barrier in front of the stage, jumping up and down, singing along. She clearly knew all the lyrics and looked like she was in heaven and shocked at the same time. I thought, “This must be her first-ever live rock show.” I noticed that Sara (Lee, Gang of Four bassist) had seen her and was digging her excitement too. After the encore, Sara stepped forward and gave the girl her bass pick. She swooned! In the dressing room, Sara and I said we have to go find her. So, we went out into the departing audience, and I saw her heading for the exit with her father. I ran after them and told her she’d made the whole show for us, that people like her are why we do this. I gave her something, maybe a set list, and signed her poster and t-shirt. Her dad was beaming. I thanked him for bringing her. She was crying and laughing at the same time. Just a brilliant moment.

As for our students—who knows beyond the ones in the VPAC (School of Visual and Performing Arts) that I see pretty regularly? I get asked for signed stuff for a few dads or occasionally for an Internship Supervisor. It’s nice but it doesn’t totally define me and what I do here, but it serves to show that I’m human and an artist/creator, like them. That’s true of almost all the VPAC faculty. We are practicing artists. It’s a good team over here.

There’s a new Danny Boyle-directed FX/Hulu show called Pistol, based on Steve Jones’ memoir of being in the Sex Pistols. Did you ever cross paths with the Sex Pistols? What does it feel like to see some of your contemporaries portrayed in contemporary pop culture years later?

The funniest part of the whole affair has been seeing all the negative comments and posts on social media. Mostly by people who weren’t there (age-wise or geographically). I was there— not right at the beginning—but I saw the Sex Pistols pre-Sid Vicious, and spent a good part of the summer of ’76 in London going to punk rock shows, and getting chased by Teddy Boys who wanted to give me a kicking. (I was good at jumping onto the backs of London buses to get away!) I know John Lydon (Sex Pistols singer) because I played on Top of the Pops with his later band, Public Image Limited, a few years later.

I know what was going on with the country socially and politically because I was in the middle of it. Most Americans have and had no concept of what the Pistols meant to us, right then and there. It’s easy to poke little holes in the series about who said exactly what or what played what and when; but it was the totality of the scene and the band that mattered so much. It wasn’t a documentary; it wasn’t trying to be completist. It was done with love. It’s art. It was fun and rude and loud and boisterous, and deliberately tweaked people, just like the band was and did. I loved it; it made my heart race a few times.

Finally, I know you’re a big Harry Styles fan. What do you think of his new album?

I’m digging it a lot. It’s softer and more thoughtful than previous stuff. This boy (sorry, man) is so aware, he’s fluid and daring, a brilliant performer, so decent and fun. I keep seeing lovely moments of him shouting out to people in the audience—his grade school teacher, or someone he pointed to at his hometown show in Manchester and said, “I know you! You were at the Glasgow show!” So, you know that person was in hog heaven right then. Long may he reign. He has a cracking band, too. His drummer is a good friend of David Pajo’s (Gang of Four guitarist), but don’t tell my daughter … she’ll want tickets to every show.