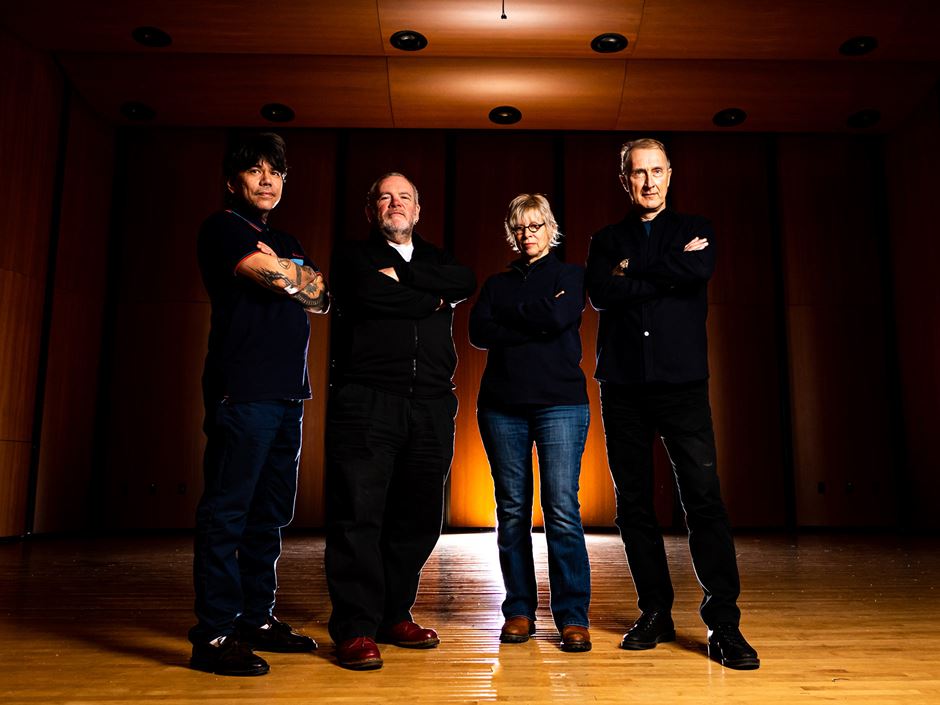 Over winter break, British post-punk outfit Gang of Four rehearsed for its upcoming tour at the Walter J. Manninen Center for the Arts.
By: Sarah Sweeney

During the cold doldrums of January when many students are away on winter break, it can feel like veritable tumbleweeds are blowing across campus.

But if you listened closely, you might’ve heard one of the most consequential post-punk bands of the 20th century rehearsing inside the Walter J. Manninen Center for the Arts.

That band, Gang of Four, features Endicott’s own Hugo Burnham, Assistant Professor of Experiential Learning and internship faculty at the School of Visual and Performing Arts.

“The students aren’t here, and I asked Dean Towner, ‘Are faculty allowed to book the band room?’” recalled Burnham, Gang of Four’s founding drummer. “It’s a great room and everyone has been very supportive, particularly studio manager Owen Burkett.”

For almost three weeks at Endicott, the band put in long hours gearing up for a tour on the heels of their Grammy-nominated and sold-out box set, Gang of Four 77-81, on Matador Records.

“The Grammy nomination was a great compliment and a surprise, really,” mused singer Jon King, and the box set’s art director. “Being on an indie label with no marketing budget, it’s quite surprising to get on a shortlist where my main competitor is George Harrison.” (King shares the nomination with art co-directors Dan Calderwood and Bjarke Vind Normann.)

The band, which has gone through multiple iterations since the fracture of its line-up in 1983, is feeling reenergized these days. Not only from the nomination and subsequent tour, but the return of bassist Sara Lee—who played with the group in the ’80s—and the addition of ex-Slint guitarist David Pajo, one of the most sought-after musicians today.

“I look forward to playing every night with my favorite band,” said Lee, who went on to work with acts from the B-52s and Ani DiFranco to Fiona Apple. “We knew each other so well after being on the road for three years together and it’s—just like that—right back where we left off.”

Pajo, who grew up with Gang of Four’s music and has most recently played with Zwan, Interpol, and the Yeah Yeah Yeahs, said his entry into the band is something of a dream come true. “I always felt like there was English punk and there was Gang of Four,” he said. “You guys were—are—gods, you know?” 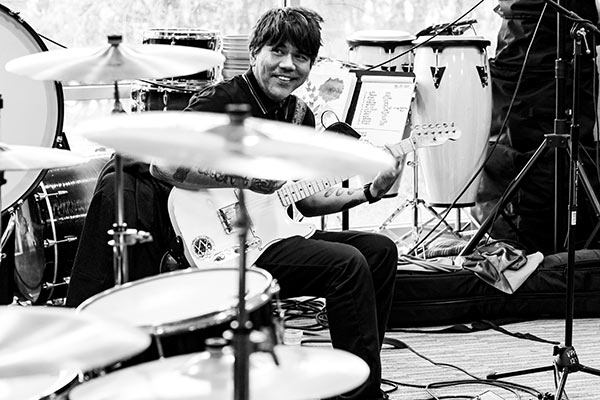 From England to Endicott (And Everywhere In Between)

Gang of Four, like any band, experienced its share of ups and downs. People quit or were pushed out. Copyright battles were waged. Managers came and went, sometimes with the money. The band reunited, toured, and did it all over again. Founding guitarist Andy Gill died in 2020.

Burnham, who was born in London and grew up in the English countryside, took a circuitous path back to the group he joined as an artsy ex-jock who grew up, he said, “around people who were ... different.”

His father worked in the fashion business in London’s West End, and dressed impeccably, wearing a full-length fur coat to Burnham’s rugby matches. While neither of his parents were particularly musical, watching the pivotal British weekly BBC music show Top of the Pops was a family ritual.

Burnham still recalls the day his father brought home the first family record player and a single—“Honky Tonk Women” by the Rolling Stones.

“The first album I got was Let It Bleed, and then I just started buying loads of records,” he said. “Creedence Clearwater Revival, Sergeant Pepper, Deep Purple, Small Faces ...”

Burnham played a snare drum in his prep school’s orchestra but, once he got to high school, found himself drawn to London’s Charing Cross Road, home to all the music stores.

“I saw this old red Premier Olympic kit that cost £75. I tore back to Dad’s showroom and said, ‘All my savings, I want to buy this drum kit. Can you come and look?’” 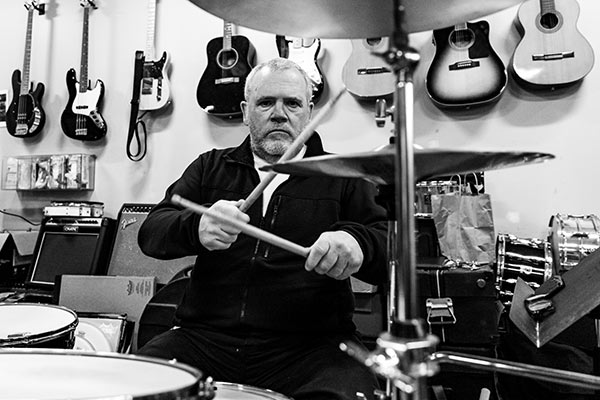 Burnham set it up in a shed behind the house and brought the record player along, too. “I didn’t have a drum stool, so I sat on an old clay chimney pot. It was just the right height,” he said. “And I’d play along to my favorite records.”

He loved music, but he equally loved sports—rugby, squash, cricket—and theater. His headmaster was quite progressive, and bands like Genesis came to play at the school. Burnham’s first band opened for some of the acts, and he went on to book others.

“The first concert I went to was Creedence Clearwater Revival in 1971 at the Royal Albert Hall, which was so exciting. The second was the same band, nine months later. I was 16. Then I started following bands like Hawkwind around. We saw the Who at the Rainbow. Bowie there too, for the first time. That show blew my mind. It completely changed my world.”

Even so, Burnham didn’t envision a musical future for himself. He sold his drums to concentrate on university entrance exams before deciding he didn’t want to go to university, after all. “I wanted to act, so I auditioned for the Central School in London, but didn’t get in, so I thought I’d join the Royal Navy,” he said. “It was a way to see the world, have fun, play rugby. I was headed for officer training, but the weekend I was supposed to go to boot camp, I sent the ticket back and said, ‘Sorry, I’ve got to go to a concert with my brother.’”

He spent a year doing odd jobs and “applying to any university that would take me,” he said. That was Leeds University, where he studied English and theatre, and where he’d eventually meet King, Gill, and founding bassist Dave Allen.

“After five weeks at Leeds, I realized jock culture was just not me,” said Burnham. “I also got involved in the theatre, and all the people I was hanging with—who became Gang of Four, the Mekons, Delta 5, and Soft Cell—were fine arts students. We started writing songs and playing shows.”

Gang of Four formed during what was a new heyday for British music. Bands like Sex Pistols and the Clash helped introduce punk rock with a fiery British perspective to the world, following artists like David Bowie, who’d already broken both gender and artistic molds.

The 77-81 box set, which features archival photos, original lyrics, and anecdotes from everyone from Michael Stipe and Flea to Sofia Coppola and record producer Steve Albini, also firmly situates the band in a time of rampant British inflation, unemployment, industrial conflict, nuclear fears, and rising far-right sentiments—not unlike today. Per the liner notes, those dark times demanded radical new music. 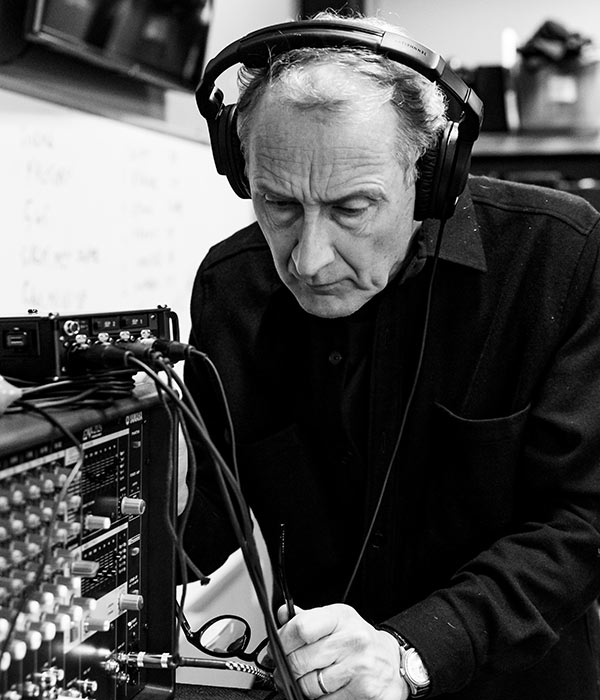 On May 15, 1977, Gang of Four played its first show in a Leeds basement. Soon, they were supporting the Buzzcocks on tour, followed by an indie label EP, which led to a major record contract with EMI and an invitation to appear on Top of the Pops, which Gang of Four ultimately rebuffed over a request to alter its lyrics.

After recording their first album in the spring of 1979, they set off on an American tour that would launch the band to new audiences, acclaim, and a record deal with Warner Bros. Records. From 1979 to 1982, the band toured the world and released a spate of now-classic albums—Entertainment!, Solid Gold, and Songs of the Free—before Burnham left the band in 1983.

They carried on without him for a few years, while Burnham made a name for himself in the business side of the industry, first managing bands and then working as a talent scout for Island Records. He went on to work with Quincy Jones’ label at Warner Bros. and with EMI Music Publishing, both in Los Angeles.

He returned east to Gloucester in 1998, where he continued managing artists and joined the board of Windhover Performing Arts Center in Rockport, until a chance encounter with an old music friend who recruited Burnham to teach at the New England Institute of Art in Boston (NEiA).

He taught full-time, earning a master’s degree in education from Cambridge College and eventually becoming Dean of Student Affairs at NEiA. The school closed permanently in 2017. Along the way, he met his wife, the Oscar-nominated and Palme d’Or-winning film producer Sarah Green, a native of Cape Ann.

“Hugo’s history at Endicott goes back to 2008, when he was an adjunct professor teaching political science courses relating to music and popular culture,” said Mark Towner, Dean of the School of Visual & Performing Arts, who hired Burnham full-time in 2018. “However, my history of Hugo goes back nearly 30 more years, to 1979, when I was a young artist living in New York City. Gang of Four hit the scene like a tidal wave, with what felt like the entire city dancing and grooving to their music.”

On the Road Again

Just before the tour kicks off in Buffalo on February 27, Gang of Four will reunite once more at Endicott for a final rehearsal, overnighting at the Wylie Inn and Conference Center before journeying North America by bus, including a March 6 stop at the Crystal Ballroom in Somerville. Like many of the band’s shows, it is already sold out.

“This is the first time we’ve played together since the spring of 1984,” said Lee, referring to herself, King, and Burnham. “And we’re having so much fun. It’s wonderful.” 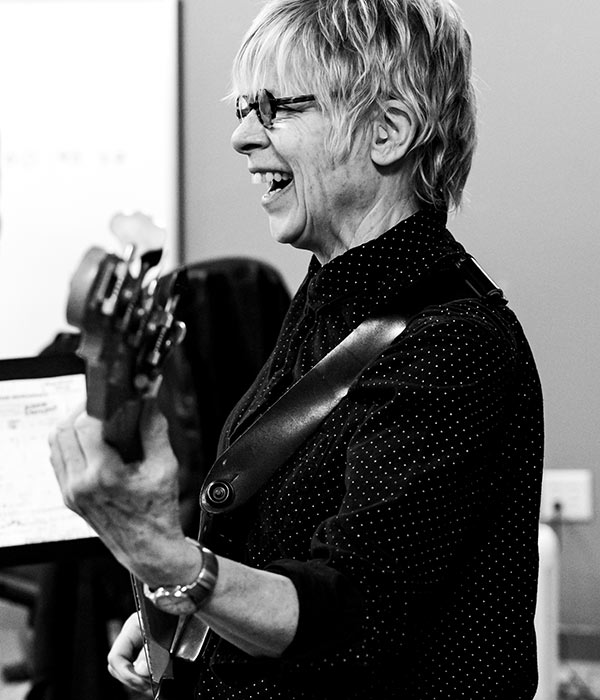 “I think that this is a good time for a younger generation of Gang of Four fans to discover us,” added Pajo. “It’s hard to play these songs and not be excited.”

Gang of Four’s original line-up reunited in 2005, playing Coachella and embarking on a successful world tour. But playing in America is particularly meaningful for the group, having had such success here so long ago.

“What surprised me when we reunited before was, I was wondering what the audience would be like, but it seemed to me about two thirds of the audience were under the age of 30,” said King. “So, the music—because it doesn’t sound like anything else— seems to have its own charm.”

But even while on tour, Burnham remains focused on an audience of 280—Endicott students, that is.

He’ll work remotely from the tour bus, advising and guiding students who aspire to engage with the creative world that he’s worked in and around nearly all his life.

“The Gang of Four tour is an excellent example of how faculty and staff are often practicing professionals, in addition to the teaching and administrative responsibilities they have at the College,” said Towner.

“I work for creative students, and I think I understand what they want to do,” said Burnham. “I’ve been there. It helps me be a better internship advisor.”

Not many students know about Gang of Four or about Burnham’s cult status amongst music lovers, but occasionally he gets the odd record to sign—for someone’s father, he said.

Burnham is also a father, and his daughter Ts (Tess), a music theater major at Dean College, will sing back-up vocals on the band’s east coast tour dates while she’s on spring break.

It’s because of Ts that Burnham says he’s seen artists like the Jonas Brothers, One Direction (three times), and Harry Styles—who he is a full-on admirer of—twice. When he’s not advising, teaching, or playing, he ensconces himself in literary crime novels, playing golf, and more music, of course.

“I’m very lucky,” he said. “This is essentially my professional practice and research, and I’m very grateful to have the support of the college and Dean Towner. And three sets of stairs to climb in the Manninen Center every day, trying to stay fit enough to play.”

The 64th Grammy Awards will be held on April 3, 2022. View Gang of Four tour dates and follow the band on Instagram.