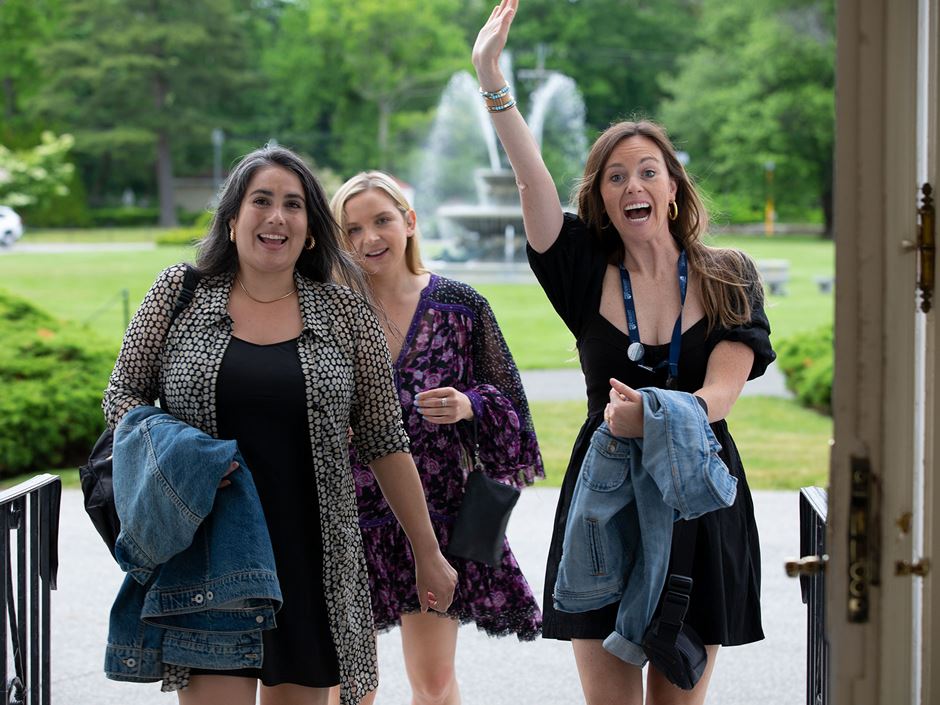 Alumni flocked to the Nest for Reunion Weekend to catch up with old friends, share in timeless Endicott traditions, and close out 22 years of the mods.
By: Sarah Sweeney

Gulls from class years ending in 7s and 2s flocked to the Nest for Reunion Weekend to catch up with old friends, make some new ones, and share in a whole lot of fun.

Reunion Weekend, held June 3-5, notably welcomed the Class of 1972 for its 50th Reunion, cementing the class’s status as “Golden Gulls.”

“We were roommates then and we’ve been soul sisters ever since,” said Golden Gull Gail Rosenfeldt ’72, who kicked off the weekend alongside Gail Mikolsky ’72 at Friday night’s Welcome Dinner.

The duo couldn’t resist a flip through the 1972 yearbook, even though Mikolsky was nowhere to be found inside—she’d missed photo day all those years ago.

“But she had beautiful flowing blond hair down to her butt!” laughed Rosenfeldt.

Pals Peggy Palmer ’82 and Emily Guby ’82 also showed up at the Welcome Dinner together, though not in their usual large group.

“Usually there’s about a dozen of us, but everyone had other commitments,” said Palmer.

The alums are so close that they call themselves “Reynolds ’82”—“and we’ve even adopted a couple of others,” added Palmer.

“We just became a family,” echoed Guby. “We’ve even had a mini Endicott reunion in Florida.” 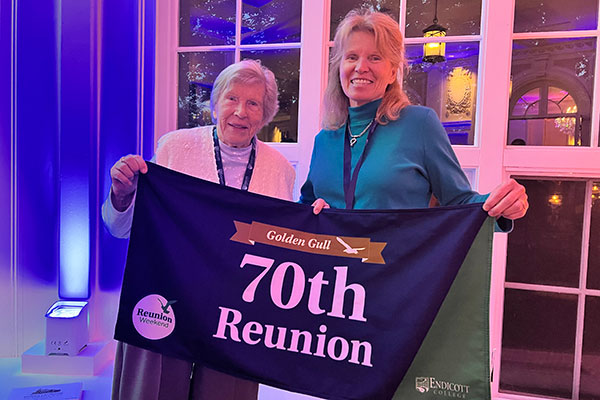 At Saturday’s All-Class Clambake and President’s Address, President Steven R. DiSalvo, Ph.D., updated the alumni on the historic growth of the College, and presented the Outstanding Alumni Award to Trustee Susan (DiMartino) Dowling ’72 and the Eleanor Tupper Award to Candace Giselle Thomas ’12 for their outstanding support and dedication to Endicott. 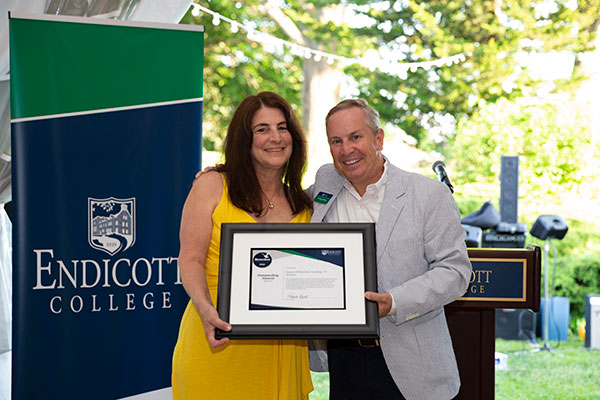 “Over the years, Susan has remained an engaged Gull, frequently attending Endicott events and serving as a proud alumni representative. Through Susan’s generous and consistent philanthropic support, she ensures Endicott’s mission is put into practice,” said President DiSalvo. “By establishing a named, endowed scholarship fund, Susan has demonstrated her commitment to helping current and future students achieve their dreams.”

Bestowing the Eleanor Tupper Award, which honors a young graduate who best exemplifies the Endicott qualities of excellence, consecration, and service, DiSalvo noted Thomas’ work on the Gulls of the Last Decade Council and as secretary of the Alumni Council.

“In addition, Candace’s commitment to the community extends beyond Endicott’s shores,” he continued. “She serves as the Co-chair of the Black Professional Alliance for Eastern Bank and as a Big Sister for Big Brothers Big Sisters of America.” 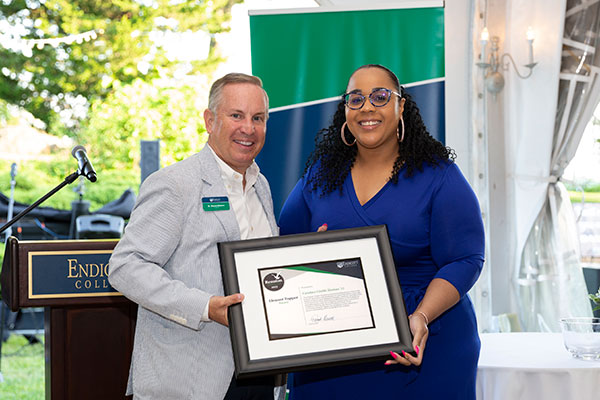 Aside from the games, dancing, and a can’t-miss clambake, another event loomed large over the festivities—the Farewell to the Mods (formally known as the Village), Endicott’s spate of modular residences implemented on campus in 2000.

Since then, “the mods” have become a beloved fixture, especially for former residents who reveled in the unique autonomy the mods provided.

“They were just cool. They were like your own little apartment,” remembered Marcie Lombard ’02, “and nothing else was up there.”

“It was a sense of freedom, being so young,” according to Adiya Horsford ’03, who attended the party with onetime roommate Jessica Makowski ’03 and friend Erica Mello ’04.

“Being here brings back a lot of memories,” said Makowski.

Horsford nodded. “I turned 21 in this trailer!” 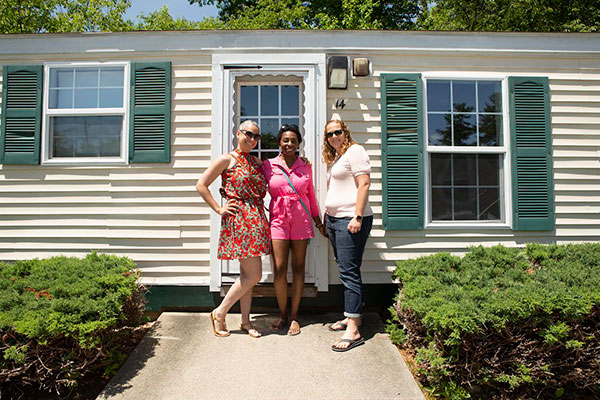 With the continued expansion of the College and a historic number of incoming first-year students, the Village will soon make way for a new residence hall, with construction slated to begin this summer.

“When they first came to campus, we were so excited,” recalled Becky Koenig ’02 who lived in #7 with Allison McDonnell ’02.

“Being the first people to live in them was really something special,” said McDonnell. “You’re living with three other people—but not 100 other people.”

The two reminisced about Sunday dinners with friends (the mods have their own kitchens) and even a party where they dressed up like characters in the film Coyote Ugly.

“I hope current students and alumni see that the mods era was really the beginning of huge growth for the school and it was an exciting time to be on campus,” said Sara Moore ’07. “Maybe you could say it was making sacrifices to live in a trailer, but I don’t think anyone looked at it as a sacrifice—just a really fun moment in time.”

Held on the last day of Reunion Weekend, the Farewell to the Mods was a rollicking nostalgic romp complete with live music, lawn games, and hamburgers. The fête capped an intimate but joyous weekend where one theme stood out: friendship.

Tyler Redding ’04 and Chris Lipscomb ’17 drove down from New Hampshire—where they were attending a bachelor party of another Endicott alumnus—just to memorialize the mods.

“Some of my best memories were here,” said Lipscomb.

Redding agreed. “You can’t tell our Endicott story without talking about the mods.”


Are you part of Endicott’s alumni community? Update your contact information, submit a class note, and stay tuned for information on next year’s Reunion Weekend.