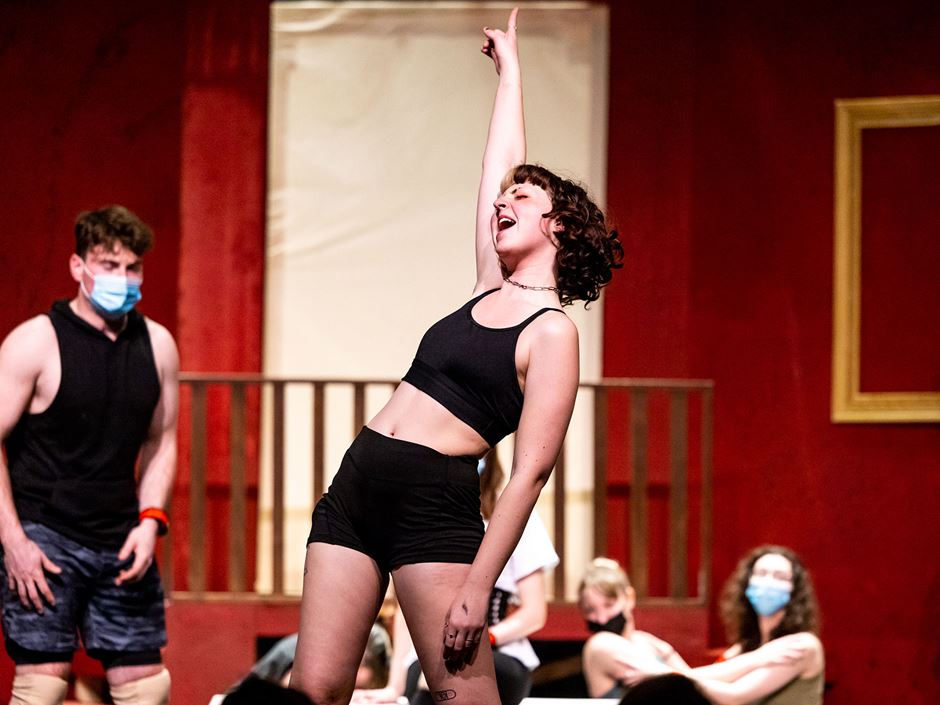 Have you ever attended a musical performance where audiences were encouraged to dress up … or bring props and yell at the performers?

Billed as a “deliberately kitschy rock’n’roll sci-fi gothic musical,” Rocky Horror offers not only great music, silliness, and a whole lot of fun, but it also tackles some very serious topics with the tact of a modern lens.

The story follows sweethearts Brad and Janet, who are stuck with a flat tire during a storm and discover the eerie mansion of Dr. Frank N. Furter. As their innocence is lost, Brad and Janet meet a houseful of wild characters, including a rocking biker and a creepy butler. Through elaborate dances and rock songs, Dr. Frank N. Furter unveils his latest creation: a muscular man named “Rocky.”

While the well-known 1975 movie The Rocky Horror Picture Show was based on the musical, the two performances are not the same.

“This is not a shadow cast of the movie,” said Rocky Horror Music Director and Chair of the Performing Arts Rebecca Kenneally. “This is our students acting and singing and dancing these roles, playing live music with students in the band. Audience participation is crucial—we want you to wear costumes and have fun with the props.”

Rocky Horror is in good hands. The directing team, Kenneally and Staging Director and Coordinator of Theater Katharine Clarke, is fresh off making the semi-finals of The American Prize for last year’s production of Work in Progress. The student-written musical theater piece has earned four nominations, including directing for Clarke, conducting and best overall performance for Kenneally, as well as composition.

First-time viewers are especially welcome, explained Kenneally, who encourages the audience to embrace the quirky content.

“We call them Rocky Horror virgins,” she shared with a laugh. “And we really want them to come experience this and to know that it’s going to be wacky and wild but they’ll feel safe and loved.”

Senior Ashley Olsen, who plays Janet, said she’s proud of the range displayed by a cast who are doing things they’ve never done before.

“It’s been a lot of expanding our boundaries of what we’re comfortable with, and just learning to let loose,” she explained. “I’m excited for people to come and see that because I think it’s a very noticeable difference—especially with the ensembles—than things we’ve done in the past.” 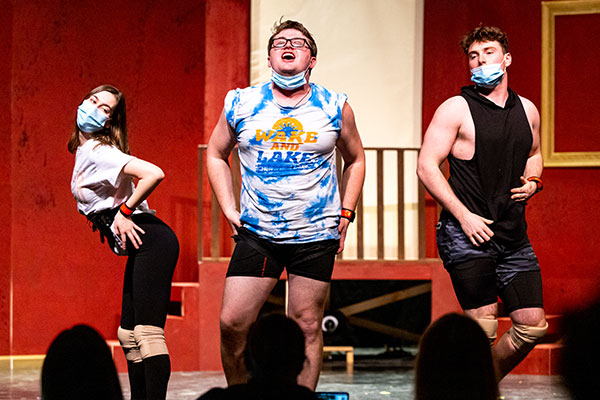 Junior Lauren DiCocco, who plays Frank, said Rocky Horror is an eccentric show like no other.

“It is truly an experience, not just a performance,” she shared. “I encourage audience members to dive into the fun—yell and laugh and sing and feel sexy. We are on stage making absolute fools of ourselves, and loving every second of it, join us! If one person walks away from this having experienced live theater in a way they never have before, I will be happy.”

As folks familiar with the Rocky Horror story are aware, the production does punctuate its overarching silliness with a depiction of sexual assault, as well as potentially sensitive topics like sexuality, gender expression, and LGBTQ+ identity.

“I think the debate around Rocky Horror is that it is super important in queer history—it was revolutionary at its time—but things have changed,” said Olsen. “The big question is … have we changed too much? Is it no longer appropriate? Is there a way to do this that’s not offensive?”

The production team has put in a lot of effort to make sure these questions are asked and answered so that the experience of the actors, crew, and audience members is one of support and respect.

“It’s not just that there’s sexual assault in the show, because there are many shows that deal with that,” said Kenneally. “But it’s dealt with in a way that’s very, very dated; it’s an assault that is played for humor, which is really disturbing for contemporary audiences. It’s actually been really interesting to talk about this with students, about how times have changed and how obviously wrong that is to a contemporary viewer in comparison to when this show came out.”

To aid in producing and promoting Rocky Horror with thoughtful intention, Kenneally and Clarke started by discussing the show with the office of Diversity, Equity, Inclusion, and Belonging, the Alliance student organization, and various faculty and staff, as well as a theater in Boston that recently put on the show.

Clarke and Kenneally also partnered with the YWCA Rape Crisis Center in Lynn, Mass., to hold consent workshops for the crew and actors (a workshop will be offered to the wider Endicott community on April 4).

According to Clarke, with these tools in hand, the timing felt right to bring Rocky Horror to Endicott.

“We want to share the message of ‘we are here, there is a light for everyone,’” said Clarke. “The performing arts center is a place where we’re diverse. Our recent climate survey says that our faculty and staff are 24 to 30% queer-identifying people—a lot of our cast is part of the queer community. We felt like this year we were ready to bring this production to life because we had voices that could help us represent that community.”

She continued: “We all feel like Rocky Horror is historically an important piece in the queer community; there are so many testimonials about people saying it saved their lives. But that doesn’t mean it aged well.”

While it’s not possible to change the writing of the show, there does exist flexibility in the directorial decisions. Clarke wrestled with the best way to depict the assault scene in a way that maintains the impact it’s supposed to have on the rest of the show, bringing in an intimacy coordinator to help choreograph the actions, and also staging it in shadowplay.

Heavy topics aside, Rocky Horror expects to offer an experience that audiences will love.

“I haven’t had so much fun with the music of any show so far,” said Kenneally. “It’s exciting and electric and catchy and fun.”

View showtimes and purchase tickets. General admission is $15; free with Gull Card. Costumes and props are encouraged. There will be a photo booth and collection for the YWCA Rape Crisis Center at every show.