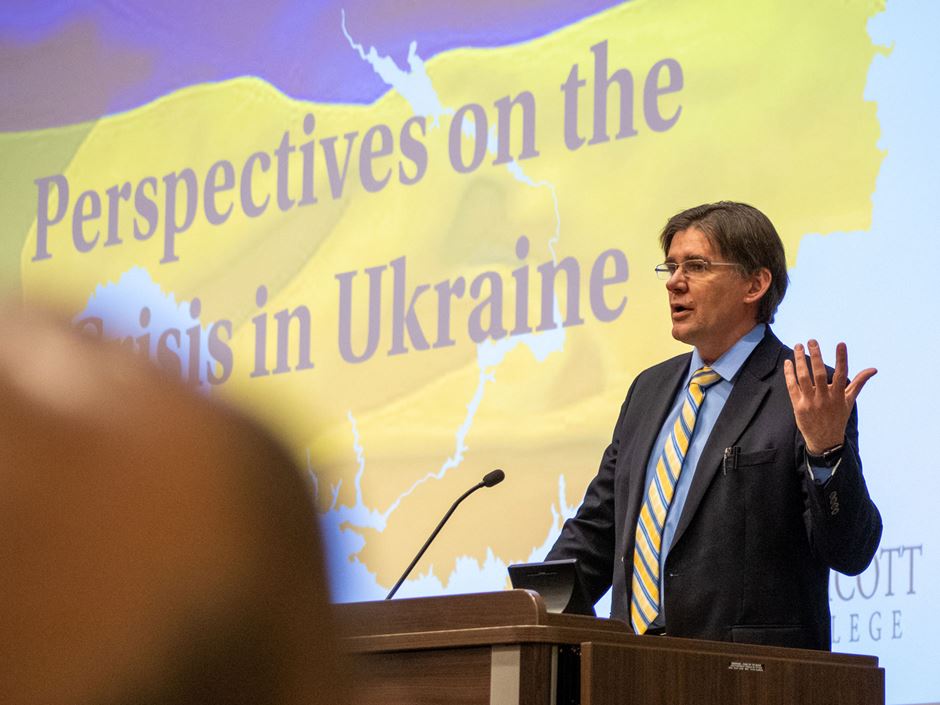 From nuclear fears to the psychological trauma of refugees, a faculty panel offered sobering perspectives on the current conflict between Russia and Ukraine.
By: Sarah Sweeney

The invasion of Ukraine on February 24 has now left more than 2 million Ukrainians displaced and historic sanctions leveraged against Russia. To better understand the history between the two countries and Russian President Vladimir Putin’s intentions, Endicott convened an expert faculty panel on Wednesday (March 9) in the Cleary Lecture Hall.

“If there was a referendum before Putin’s decision, I would assure you that 90 or 95 percent of the Russian population would say ‘no’ to this war in Ukraine,” Dr. Vitaly Kozyrev, Professor of Political Science and International Studies, told the crowd.

“To make a long story short,” he continued, “it’s all about the U.S. and the West and NATO enlargement for the West. While some consider NATO’s enlargement as the spread of democracy, Russia sees it as an existential threat to its national security.”

Kozyrev grew up in Russia and poignantly recounted his Ukrainian roots. His grandmother was a Ukrainian woman who “became a rich peasant,” he said, and was even able to purchase a tractor. But with Joseph Stalin’s hardline policy of dekulakization—a campaign of repression against prosperous peasants—she died of starvation in what would later be known as the Holodomor, or Great Famine, which happened from 1932 to 1933.

At 16, Kozyrev recalled receiving his passport and putting “Ukrainian” as his nationality, which was usually derived from the mother’s side of the family.

“Then my father went to the police station and convinced them to put Russian. I said, ‘Father, why are you doing this?’” he recalled. But Kozyrev’s father feared that his son’s Ukrainian status would inhibit his career opportunities and chances in life.

“I traveled to Ukraine often during the Soviet times,” Kozyrev remembered. “Ukrainians are hardworking people and they were very much concerned about the discrimination and suppression and inequality.”

Dr. Alana Tiemessen, an Associate Professor of Political Science and Security Studies, reiterated Kozyrev’s point that Russia would not stand for Ukraine becoming a NATO member. 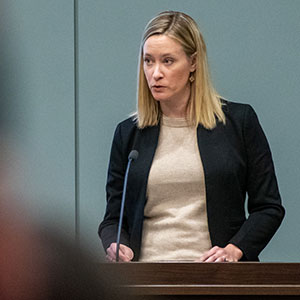 But the conflict, she said, has spurred “a new direction in European foreign policy.”

Germany, for instance, has moved past its prior stance of passivism and authorized an increase in military spending. After Ukrainian President Volodymyr Zelenskyy boldly rebuffed evacuation, asking for weapons, money, and technological assistance instead, the U.S. and other democratic countries heeded the call to action—and in record time, Tiemessen said.

But while the U.S.’s stringent sanctions of Russia are squeezing Putin and his ally oligarchs, Tiemessen noted that, “to be effective, sanctions have to affect Putin’s ability to stay in power.”

And that power is fierce, and backed by weapons of mis and disinformation, according to Assistant Professor of Broadcast & Digital Journalism Lara Salahi.

“Information war is a critical piece of this conflict,” she said. “Disinformation is a way of using news and information in an effort to deceive the public.”

She noted that Putin’s disinformation campaigns were both sly and vast. 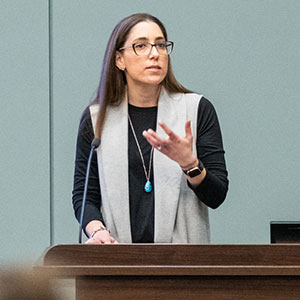 “It’s not just planting false stories—this is the full-fledged creation of news outlets and startups,” she said. “A state-sponsored campaign of debunking factual news stories.”

What’s more, Russia recently outlawed any reporting about the Ukraine conflict and news outlets have since pulled reporters out of Russia. Some newspapers like The Washington Post have even eliminated bylines by Russian reporters to protect their safety.

Both Tiemessen, Salahi, and Assistant Professor of International Studies Semahagn Abebe noted the Euro-centric selectivity and discrepancy in the international response to the Ukraine invasion. While they all agreed that the media coverage and widespread outrage over Ukraine was and is warranted, they highlighted the fact that similar conflicts in Syria and Myanmar, to name a few, have failed to galvanize such a hearty international response. 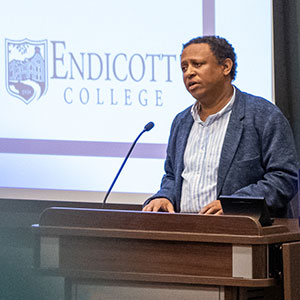 “As a refugee myself,” said Abebe, “there are going to be very serious challenges to stay safe, and it’s mostly women and children who are affected.”

He noted the psychological trauma of Ukrainians abandoning home—everything they’d ever known—and their families.

“There has been a warm welcome of refugees into neighboring countries,” he said, referring to the European Union and U.K. bypassing visa laws to swiftly enter fleeing Ukrainians.

But with the fickle nature of the world media, “I worry that the focus of supporting refugees could be forgotten if some breaking news happens,” Abebe said.

“The attention should continue.”