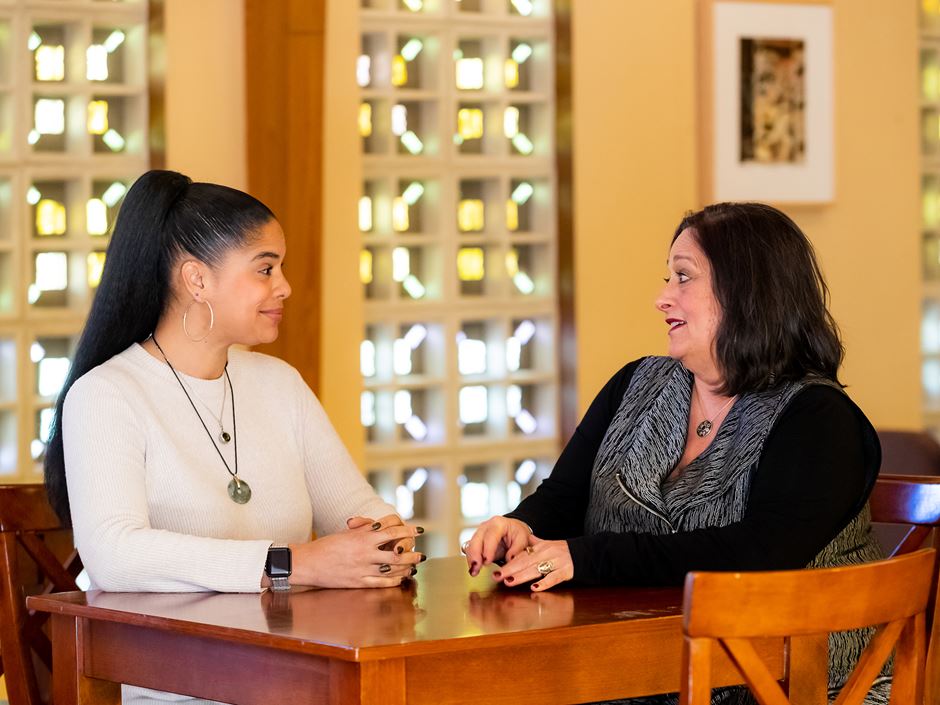 After the murder of George Floyd in 2020, Vice President and Chief Diversity Officer Brandi Johnson and Gail Cantor, Director of Spiritual Life and co-chair of the DEIB Task Force, knew they needed to create spaces for students, staff, and faculty to have deep discussions on belonging.
By: Megan Tkacy

“If you feed them, they will come,” said Brandi Johnson, Endicott’s Vice President and Chief Diversity Officer. “That’s what we realized.”

She’s talking about the College’s Dine & Dialogue sessions, which, for the first time, will host the entire Endicott community in group discussions on diversity, equity, inclusion, and belonging on campus. The February 16 sessions will take place over breakfast, lunch, and dinner in the Interfaith Chapel, which is currently in being renovated.

After the murder of George Floyd in 2020, Johnson and Gail Cantor, Director of Spiritual Life and co-chair of the DEIB Task Force, knew they needed to create spaces for students, staff, and faculty alike to have deep discussions on belonging.

“We thought, ‘Wouldn’t it be great to bring groups together with food so it’s a relaxed atmosphere, and then be able to start having some intense conversations?’” said Johnson.

In the months that followed, the pair worked closely to bring the grassroots operation of Dine & Dialogue to fruition. Cantor and Johnson invited groups of people that they already knew to be “champions” for diversity, equity, inclusion, and belonging. From there, those individuals could invite someone new to the next session. What began as a group of 40 turned into a group of 80, Cantor said, and the discussions kept growing and growing.

“All of a sudden, we were having these great conversations,” she said.

Even so, the conversations for students were hosted separately from the events for faculty and staff.  Johnson admitted that, in the beginning, students didn’t want to be surrounded by their professors because they wanted to be able to speak freely. But now, said Johnson, “The whole campus is ready for this conversion to be a collaborative, joint effort, and I’m really excited about it.”

Cantor mentioned that “unless there is an incident,” community members from different walks of life might never even talk to each other about these important topics. But the hope is, with each Dine & Dialogue session, bridges are built between teachers, students, and beyond. “It’s very relaxed, which I like about it. You come and you belong,” Cantor said.

Like its previous iterations, the upcoming Dine & Dialogue will host groups over the course of a meal, where they’ll be encouraged to chat with other attendees and write down suggestions, concerns, and questions regarding matters of belonging on campus.

“Then, each table shares, and we end up with a list of things we might do,” Cantor explained.

These notes, as well as notes from the organizers, are shared with President Steven R. DiSalvo, Ph.D. and the President’s Cabinet.

“From doing that, there’s been a lot of great conversation among departments,” Johnson noted, adding that these discussions have helped pave the way for several positive changes on campus. “For instance, students made a comment about the handicap buttons not working throughout campus. From hearing that, we did an audit of the doors and the buttons to fix.”

Other developments include adding pronouns to business cards and name tags as well as the implementation of several niche employee resource groups, including LGBTQIA+ and women’s empowerment.

To get the ball rolling, Johnson opens up each Dine & Dialogue by sharing wins like this. She also calls upon thought-provoking icebreakers or stories, many of which come from her own personal experience.

“In December, when I shared excerpts from students who were transferring out of Endicott, I shared my own bias with the groups,” she revealed.

She admitted to making assumptions about the students’ demographics based on their statements.

“I couldn’t have been more off, but owning that in front of everyone proves that we all have something to learn and not to make these broad assumptions about anything,” she said. “To be able to be raw and real and own your stuff, to not pretend we are these gurus of everything, that is what I think helps to gain the trust that we have gained.”

One of the primary goals of the Dine & Dialogues is to make Endicott a more positive and inclusive space for everyone—a place where students want to be. “My hope is that all of the people on campus—from students to staff to faculty to administration to trustees—have a feeling that this space is their space … that they feel they belong, that their voice is included,” Johnson said.

She and Cantor also want individuals to be open to learning from one another.

“We’re teaching everybody that it’s okay. You can be authentic. You can be thoughtful. I think that you can respectfully have a conversation about what or where you might have shortcomings,” Cantor said. “We’re a community, and we have to have understanding.”

“This is work that’s going to be ongoing forever,” Johnson added. “I want our students to feel comfortable in their own skin here and to leave the Endicott bubble feeling confident and, hopefully, without—implicit or not—bias. And we have four years to assist with that.”

The next Dine & Dialogue will take place at the Center for Belonging and Inclusion for breakfast, lunch, and/or dinner on Wednesday, Feb 16. For more information, email dei@endicott.edu.