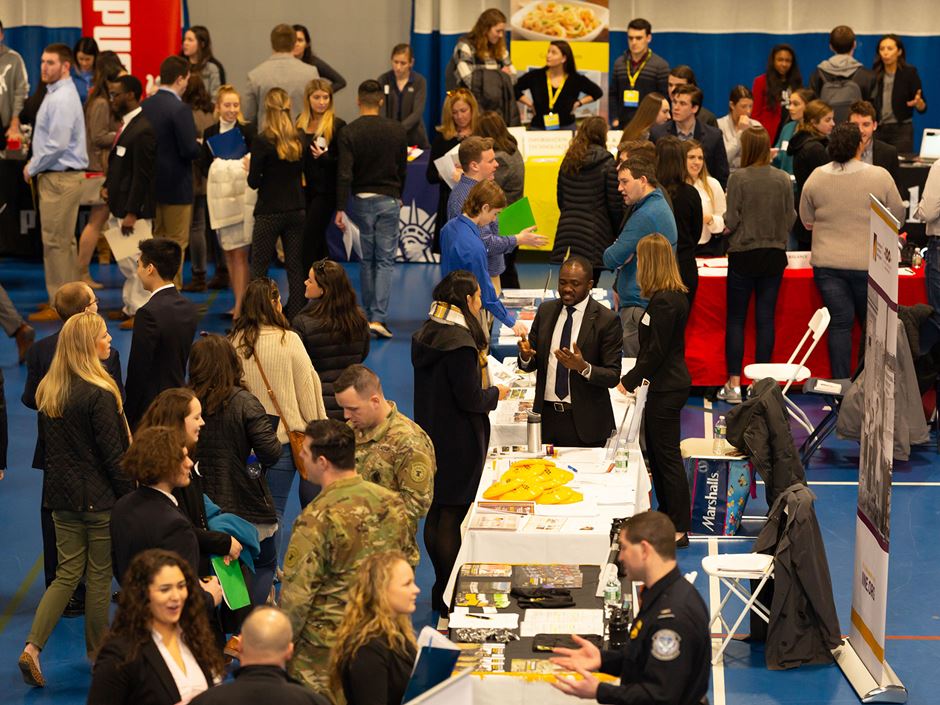 From 2 to 4 p.m. on Feb. 15, students and alumni alike are invited to meet a cast of impressive employers in the Post Center Field House.
By: Megan Tkacy

For more than a decade, Endicott’s welcomed a variety of companies to campus to connect students with exciting career possibilities. Last year, the annual Internship, Co-Op and Career Fair was held virtually in response to the COVID-19 pandemic, but this year it’s back in person. From 2 to 4 p.m. on Feb. 15, students and alumni alike are invited to meet a cast of impressive employers in the Post Center Field House.

“The list is really long because I have big aspirations. I’m looking at what the hottest jobs are, or the fastest-growing companies, and how can I get them to meet us,” said Brenda Campbell, director of employer relations, who takes the lead on organizing the fair every year. “One of my biggest jobs is to create, execute, and make sure it becomes a hallmark for Endicott.”

Since arriving in 2014, Campbell’s helped improve and transform the career fair. In the beginning any company could register, but now it’s a laser-focused, invite-only event. “The reason we do this is because Endicott has a fairly large array of majors, and we want to make sure that the employers there represent all the majors as much as possible, so there’s something for literally everyone,” explained Dale McLennan, Dean of Endicott’s Internship & Career Center.

McLennan, who’s been involved with the fair since the beginning, admitted, “It’s improved exponentially, in terms of student participation and student preparedness. The quality and caliber of employers has grown immensely.”

This evolution didn’t just happen, though. Campbell and the Internship & Career Center have collaborated for years to make this event what it is today. Part of that stemmed from opening the door to co-op opportunities. “I knew there were companies that we were missing,” Campbell said, “so I started changing the language, and it opened doors to big companies that want to hire for co-op, including Wayfair and Abiomed.”

Those companies will be returning this year, and the fair is also adding a slew of other leading employers, including Brigham and Women’s Hospital, 10Fold Communications, New England Biolabs, and Amazon.

“Amazon has a pretty impressive summer internship program that’s kind of a feeder into the full-time management positions,” McLennan said. In adding Brigham and Woman’s Hospital to the lineup, McLennan said: “In past years, we haven’t had as much representation for the nursing students because they’re on a different model. But they all do look for internships after they’re done with their clinicals, so we made a concerted effort to really bring them in a little bit more.”

The in-person fair typically attracts around 800 students—a number that might grow since the fair is mandatory for nursing students this year. To that end, it’s bound to get pretty noisy. So, how can students put their best foot forward while wearing masks?

“Speak a little bit more slowly and deliberately than you might be used to,” McLennan advised. “Be clear, be concise.”

Students will also receive a list of tips from the Internship & Career Center, which include social distancing where possible, keeping conversations short but following up later, and waving instead of shaking hands.

“We always advise students that when you meet somebody at the career fair and you have a nice connection, just send them an email right after and say, ‘It was great to meet you and I’m really interested in continuing the conversation,’” noted McLennan. “Keep it short, sweet, and it’ll make a huge, huge difference to employers—they’ll be super impressed.”

Name tags are also new this year, and students will receive them after checking in at the door using the Handshake app.

“We’re also going to manage the crowds a little bit better,” Campbell said, commenting that the fair used to admit everyone at once. “Seniors and MBA students will go in first because they’re looking for full-time, then we’ll let the others go through.”

The Internship & Career Center is thrilled to bring this event back in-person and what it wants, more than anything, is to see students succeed.

Check out a full list of employers and additional info on this year’s event.