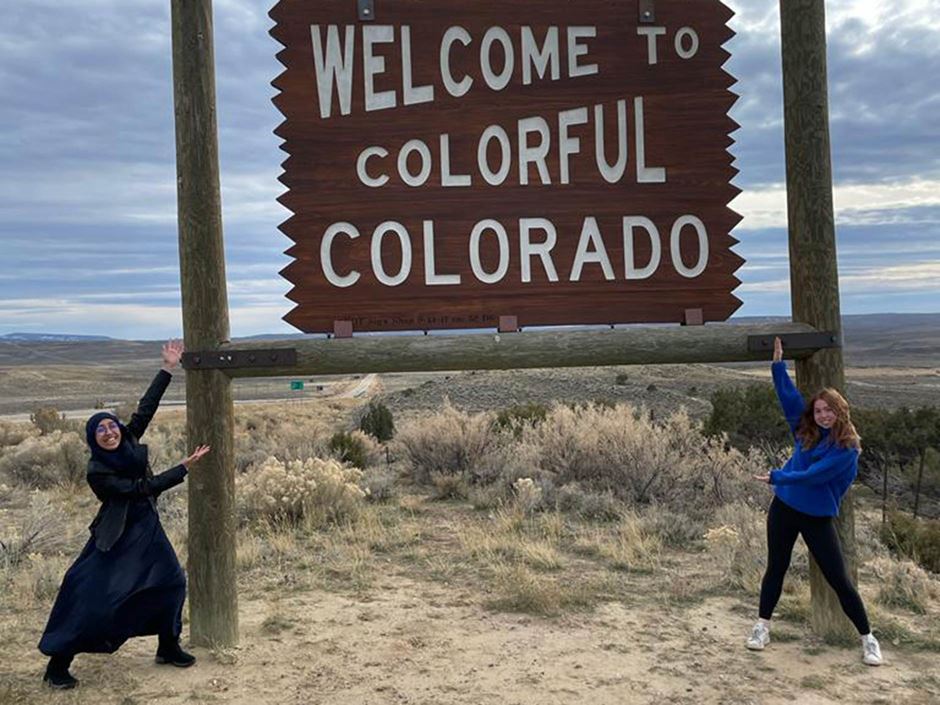 For Endicott’s international community, the holiday season offers a chance to try something new.
By: Erin Hatch

When you imagine the list of experiences that international students get when they’re studying at Endicott, it would likely include making friends, cultural exchange, some sightseeing … but what about petting a dog for the first time?

That’s just what business management student Hanane Ben Belaid did during her Thanksgiving break, when she traveled to spend the holiday with a host family in Colorado.

“I discovered that dogs play an important role in many Americans’ lives and discussions,” she shared. “I pet a dog for the first time in my life and even went to the dog park!”

When international students come to Endicott, the immersive experience is more than just studies and extracurriculars—holiday celebrations and academic break plans offer a chance to travel within the country and take part in traditions both new and familiar.

But while holidays vary around the world, the desire to spend time with friends and family is universal.

Back home in Morocco, Ben Belaid said this time of year doesn’t involve celebrating any holidays, so observing Thanksgiving in the U.S. was unique.

“I thought it was fun how my host family tried to eat nothing during the day to get themselves hungry for the Thanksgiving dinner,” she shared. “After dinner, we went to visit other family friends. We took a pie and some drinks. I loved the celebration, and I also liked the tradition of expressing what you are thankful for after the meal.”

During that Colorado trip, Ben Belaid went bowling for the first time, saw snow, and visited a hot spring. She also discovered more about the U.S.

“I realized the U.S. is very big—I could feel the differences between state to state,” she explained. “I also learned that the U.S. has its own culture. Sometimes we tend to question the American culture. Indeed the U.S. is very developed and many American habits are widespread around the world. Yet, there are still things that maybe you’ll only find in the U.S., like gravy and cranberry sauce.” 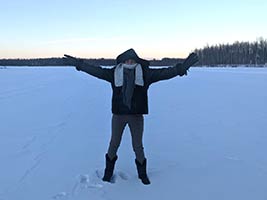 Tifany Batista Martinez of Panama enjoyed the holiday events at Endicott before traveling to Alaska during Thanksgiving break to celebrate with her brother.

“It was really fun and we got to eat a lot of Thanksgiving food and spend time together,” the political science major recalled. “In Panama, we don't celebrate Thanksgiving so I was excited for the celebrations and all the fall theme events on campus.”

Batista Martinez also noted an appreciation for the spirit of Thanksgiving.

“It was nice to hear all of my friends from Endicott going to see family for this holiday, and taking the time to be grateful. It's a really beautiful thing to do,” she said.

International studies student Pemma Lhazin stayed in the U.S. during the November break, sharing that Thanksgiving is “just like any other day for Bhutanese people” back home, though she does note that Christmas is becoming more popular as an opportunity to gather and exchange gifts. She spent Thanksgiving with her roommate’s family in Saratoga Springs, N.Y., and has mixed feelings about the holiday.

“I loved being with her family,” she said. “However, the whole history of Thanksgiving does interest me and I feel a bit uncomfortable celebrating the holiday.”

Interior architecture major Rashmi Verma will spend Christmas in Beverly with her host family, though she’ll miss her family and friends in India, as well as her mother’s cooking.

“Since India is a land where we have people who follow a lot of different regions and cultures, we too celebrate Christmas in India at this time,” she explained. “If I were home, we would probably decorate the Christmas tree and have a nice dinner with only close family members. Christmas is not a part of my religious belief but we celebrate it anyway because we like it.” 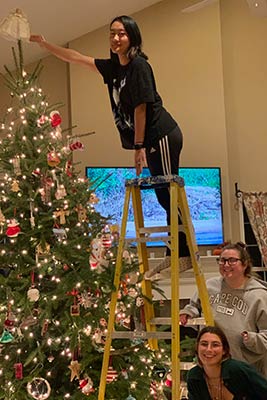 Ben Belaid shared that Thanksgiving reminded her of the Muslim holiday of Eid al-Adha in Morocco.

“After we slaughter the ram and have some food, we would take some food and visit other family members,” she said.

Lhazin explained that the same major holidays are not observed in Bhutan, but people celebrate the royal wedding anniversary and National Day around this time of year. Bhutan’s largest celebrations are the annual Tshechu festivals.

“Each state (dzongkhag) has it at a different time of the year,” she shared. “We wear our best traditional clothes and jewelry, and watch the masked dances performed in the monasteries. After that, people go on picnics with their families and have big family gatherings.”

“The only difference is that on December 8 we celebrate Mother’s Day,” she explained.

“December is my favorite time of the year. We get together as a family and eat a lot of food, and for New Year's we stay up until midnight to see the fireworks and celebrate. One really fun thing is that, if you’re a kid or a teenager, you’ll tell your friends the days you’re staying in the neighborhood for either Christmas or New Year’s so you can go around the neighborhood and play until like 3 a.m. the next day.”

Ben Belaid still plans to be home for Christmas, though all international travel plans are dicey, thanks to border closures from COVID.

“During the break, I’m supposed to be home,” she shared. “In Morocco, we do not celebrate Christmas, however, many people celebrate the new year. My family and I do not celebrate it, but since it’s a vacation, we usually go to my grandmother’s house in the village where we’re all gathered with my aunts and cousins.”

“Usually that means going to my grandma’s and having dinner and watching the fireworks that neighbors throw,” she said. “But since I'm coming just the day before, I think I’m only sleeping in with my dogs and catching up with my best friend.”

Lhazin will spend the holiday break “applying to internships, meeting friends and family, eating a lot, and sleeping in.”

After celebrating Christmas with her roommate’s family again (“because they’ve always made me feel like family”), she’ll travel to New York City and Miami to meet friends and family.

“I’m excited about spending New Year’s Eve with them and getting to eat some home-cooked food at my aunt’s place,” she said.