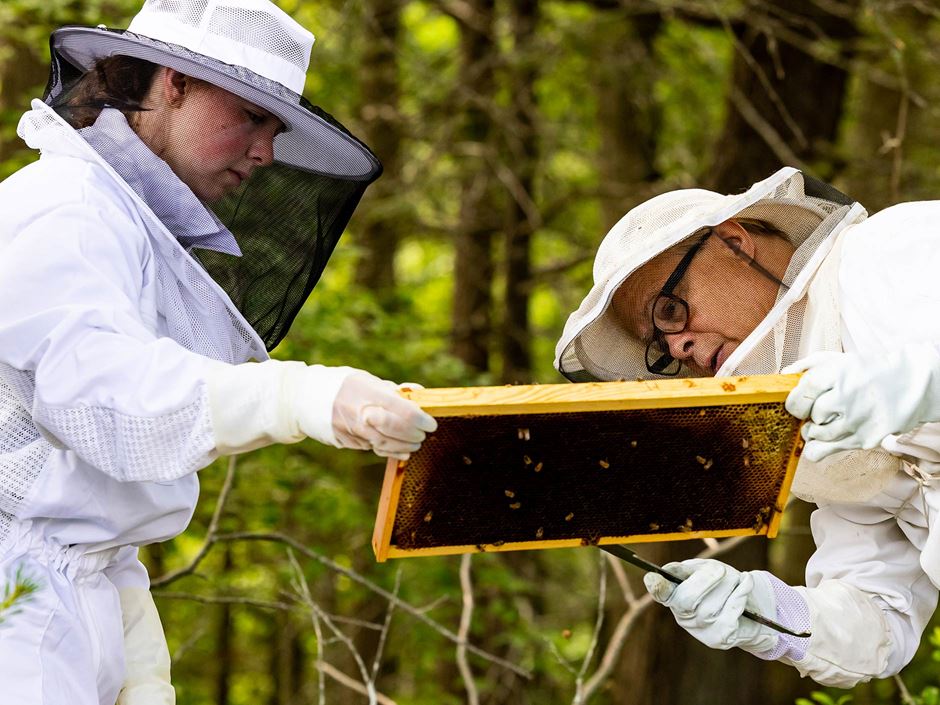 Olivia Mersicano ’22 clutched the steering wheel as she drove back to Endicott from a local farm. It was easily the scariest 30-minute drive of her life. In the backseat sat two loosely sealed wooden boxes containing around 2,000 bees each—and they were angry. She could hear the high-pitched whining of their wings rubbing together and their muscles contracting. “It was the most stressful drive,” she remembers, shaking her head.

But the risk paid off. Today, the bees are thriving in their new home—two hives nestled in the woods just behind Lot 12 on the Endicott College campus. And Mersicano is now president of the new Beekeeping Club responsible for their care and the honey they’ve started to produce. 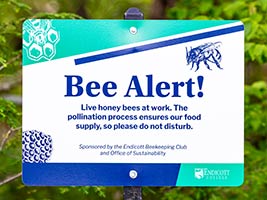 As a Sustainability Fellow at Endicott’s Office of Sustainability, Mersicano first learned that several other schools have active hives. “It would be so cool to have bees at Endicott,” she thought to herself. “It's something that we can get people involved in and a way to make a hands-on impact on the environment.”

Back in 2019, she decided to apply to start a Beekeeping Club on campus and almost immediately, Kate Chroust, Endicott’s Director of Career Services, agreed to be the Club’s advisor. “I have chickens at my home and my father-in-law is a beekeeper,” Chroust explains. Only Mersicano and Chroust didn’t have any practical experience with bees. 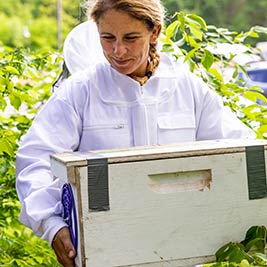 Enter Mark Towner, Dean of the School of Visual & Performing Arts and an avid beekeeper, who became the Club’s mentor.

“Fifteen years ago, I got a phone call from my wife while I was here on campus. She told me there was a wild bee swarm in our neighbor’s front yard,” Towner says. He quickly sought advice from an experienced beekeeper, then raced home to capture the bees. He continues to keep active hives in his backyard. “Several times in the past few years friends and neighbors have asked if I would teach them how to be a beekeeper,” he says. “Now we joke that I have a beekeeping school.”

Once the group received official permission to start the club on campus (not such an easy thing to do during a pandemic, Chroust explains, offering kudos to Mersicano for persistence), Chroust and Mersicano headed to Topsfield Fair’s annual beekeeping school. “I’m going to Bee school,” Chroust announced to some friends. They assumed she meant business school.

The intensive course taught them how to build and keep a hive safe, how to source bees, and about the honey production process. It also inducted them into a diverse, welcoming community of beekeepers they lean on for advice and support. “Some of them are real grandfather beekeeper types,” says Chroust.

After that, they bought their rectangular hives from a local maker in New York state. One summer day, Mersicano, Chroust, and Towner “geared up,” opened the two boxes, pulled out the hive frames and introduced the bees to their new home. In September, campus spiritual leader Rev. Dr. Gail Cantor led a blessing for the bees to officially welcome them as honorary Gulls.

The bees aren’t scary or aggressive and don’t need to be avoided. “They don’t want to sting you, because they will die if they do,” explains Mersicano.

In fact, she likes to go and sit on a rock about three feet away from them. 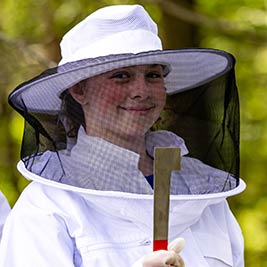 “The hives can be found in this little glen, away from the stress of campus life, and it’s kind of an oasis to visit them,” agrees Chroust.

Though one of the hives feels more charged up and the other is notably chilled out, each unique bee has a role—from the queen to the guards—and they all work together in community following ancient customs. There’s even a cleanup crew of bees. “I thought I’d be really scared going into the hive. It’s like the most Zen place you could ever imagine,” Mersicano says.

Towner is drawn to the bees’ communal hierarchy. “I love beekeeping for many reasons, and one is the connection to Mother Nature, witnessing a perfect living entity, an ideal social empire for each queen and her tens of thousands of worker bees and drones,” he says.

The Beekeeping Club’s big challenge is getting the bees through winter. “They’re still a little weak,” worries Mersicano. But the hives have been wrapped in waterproof foamboard to fend off New England snow and ice. And the Beekeeping Club is actively searching for new members who want to bee part of something sweet, while learning to care for Endicott’s tiniest community members.