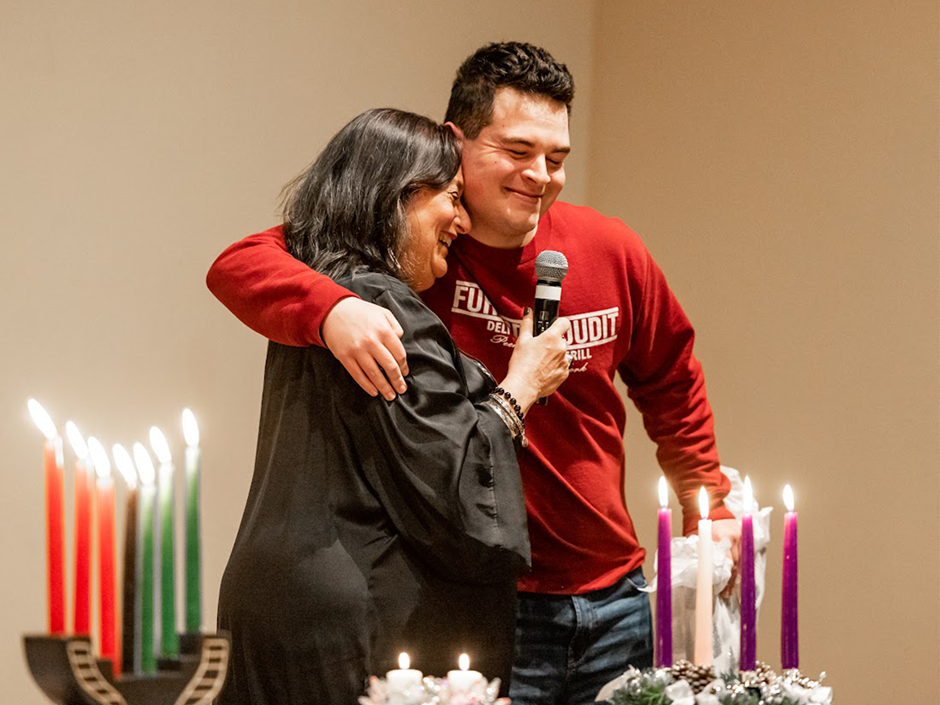 The beloved Festival of Lights returned to campus bigger and brighter after a pause in 2020.
By: Sarah Sweeney

Endicott College ushered in the holiday season yesterday (December 2) with the return of the beloved Festival of Lights—a tradition that honors diverse religious beliefs while acknowledging the “bright lights” of the Endicott community.

Sponsored by the Office of Spiritual Life and held inside the Interfaith Chapel, the festival drew a standing room only crowd after COVID-19 halted the event in 2020.

The festival also returned bigger and brighter. After the event, participants were invited to embark on a “winter wonderland walk” to take in the grand lighting displays across campus, followed by an informal reception in Hempstead Commons featuring holiday snacks from diverse religions, and a holiday meal in the Callahan Dining Hall. 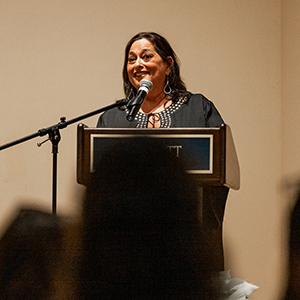 “Our intention tonight is to welcome in the holiday season and honor interfaith traditions,” announced Rev. Dr. Gail Cantor, the Director of Spiritual Life, and the festival’s host. “But tonight, we also appreciate those who inspire us. A lot goes on here and we sometimes take it for granted.”

As part of her mindfulness work on campus, Cantor asked the audience to be fully present. “I lead a lot of meditations here and I always say, ‘There’s nothing else to do right now, and there’s nowhere else to be,’” she said. “We’re going to take some time just for this and be together.”

Cantor welcomed students from the Christian, Jewish, and Buddhist communities to light candles honoring Christmas, Hanukkah, and Buddhist traditions, while members from the student-led club Standing Up For Racial Justice (SURJ) lit the seven Kwanzaa candles known as a Kinara.

Performances by the Endicott Singers and Harmonelle—led by Rebecca Kenneally, Chair, Performing Arts—provided the night’s entertainment. 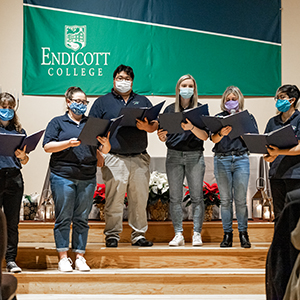 The Festival of Lights also honored members of the Endicott community. Weeks before the event, the community was invited to nominate the students, faculty, and staffers who serve as inspirational “bright lights” around campus. 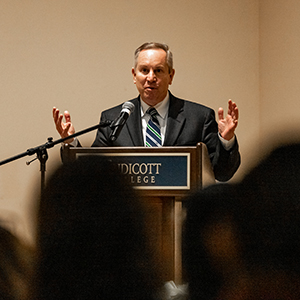 “Honoring someone as a bright light, especially around the holidays, can be an incredibly powerful act,” said Endicott College President Steven R. DiSalvo, Ph.D. “The act of nominating someone is just as important as receiving that nomination. And, after everything we’ve collectively been through, the Festival of Lights takes on a higher meaning.”

Five community members were spotlighted for their singular contributions to campus life this year, including Melissa Hempstead ’69, Chair of the Board of Trustees, who made a $6 million gift to her alma mater during Convocation; Amanda Shilo, Assistant Professor of Nursing; Rick Gagnon, Director of Facilities; Andrea Rhoades, Assistant Director of Student Engagement; and student Donny French ’22. 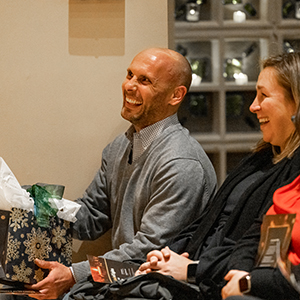 Candles lining the perimeter of the Interfaith Capital represented the hundreds of other nominees.

“Not everyone celebrates the same holidays. Not everyone has a traditional family. Perhaps some of us lost someone we love this year,” said President DiSalvo, who, along with Cantor, also recognized the recent loss of longtime Assistant Director of Facilities Bill Baxter, who died suddenly in October.

“These lights represent an acknowledgement that you are loved,” continued President DiSalvo, “you are appreciated, and you are seen by the Endicott community.”