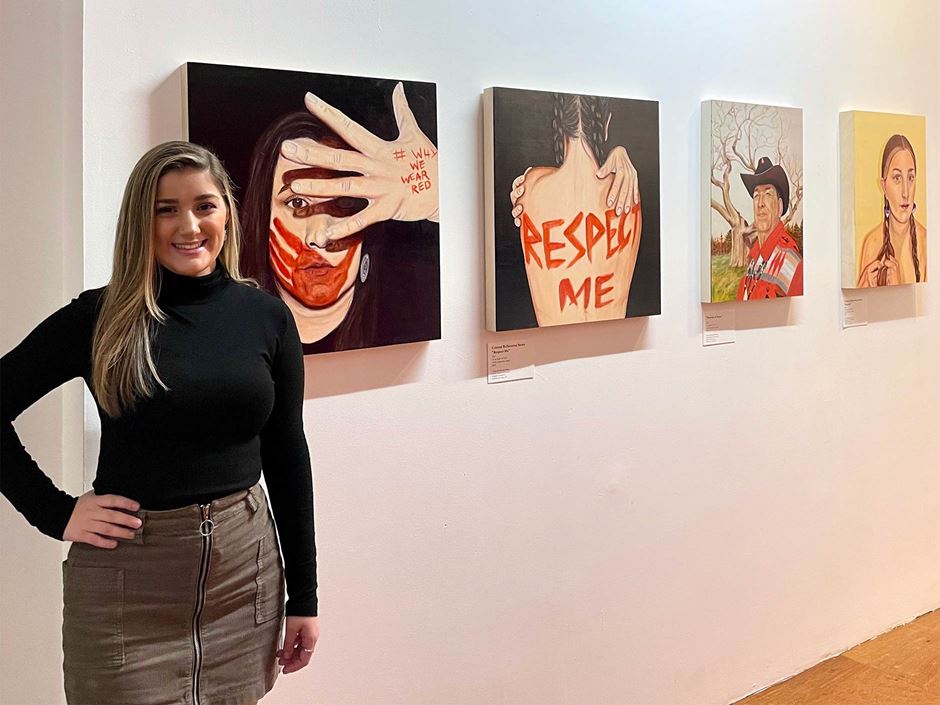 Growing up in Dighton, Mass., on Boston’s south shore, Araujo began drawing and painting in high school at the insistence of an art teacher. These days, the Endicott senior is a psychology major, an art therapy minor, and an enrolled member of the Sault Ste. Marie Chippewa tribe. 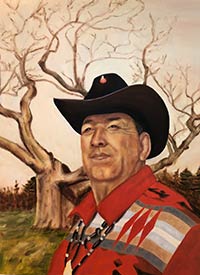 Her maternal grandfather (whom she calls Dadu) was raised on the Sioux Sainte Sault Ste. Marie Chippewa Reservation in Michigan. “He passed before I was born, and I never got to meet him,” Araujo said. Last year, she painted Dadu’s portrait as a gift for her mother. Conjuring the face of someone she’d never met but nonetheless deeply loved was a powerful experience. She recognized details of her own face in her grandfather’s profile as she went.

She subsequently painted “Identity,” an expressive self-portrait in which she poses clear-faced in braids—a symbol of connection to a higher spiritual power. The pieces are currently installed beside one another (along with two other works by Araujo) as part of a Native artists group exhibition titled “November Red,” which launched at Paper City Clothing Company in Holyoke, Mass., to commemorate Native American Heritage Month and runs through December 18.

The oil on panel paintings that Araujo contributed to the show were conceived during the Painting I & II courses that she took at Endicott during the 2020-2021 academic year.

When Araujo was considering Endicott as a high school student, it was Paige Greeley—a painter, activist, and an Endicott alumna—who served as inspiration. It felt serendipitous that her first painting course happened to be taught by Greeley, who was a visiting instructor. Until junior year, Araujo had been focusing on her required coursework with little spare time left for painting. “If I'm going to ever paint, I've got to do it now and learn from this professor,” she decided. “I was kind of struggling and wanted to produce better work.”

She worked out processes and techniques in that first course and then pushed herself to convey social messages and historic commentary in Painting II, where Professor of Art Carol Pelletier strongly motivated Araujo to push forward with a series of work examining Native culture. 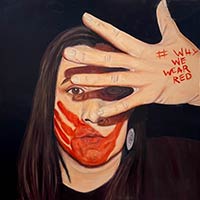 Nowadays, between Covid and college, Araujo can’t easily get to Native events. Painting represents a living connection to her heritage. Her two other paintings in “November Red” raise awareness for the Missing and Murdered Indigenous Women Movement, the #WhyWeWearRed campaign within native communities to bring recognition to the disappearance, murder, and sexual abuse of Native women and girls. Araujo’s mother sat as the model. In one painting, a blood-red handprint appears slashed across her lips. “This symbolizes solidarity,” Araujo explained.

As an indigenous woman, she proudly dances at powwows in a traditional jingle dress, a maroon costume bedecked in metal cones. Jingle dress dancers are light on their feet, keeping their movements low to the ground while dancing, kicking their heels and bouncing on their toes. As Araujo moves, the metal cones hit one another and channel the sound of heavy, falling rain.

The dance is a sacred ceremonial prayer, culminating in each dancer holding a square of tobacco in the palm of her hand and releasing it as she moves, all while keeping the sick person’s name in her mind. “You don’t dance for yourself, you dance to heal somebody else,” she said. 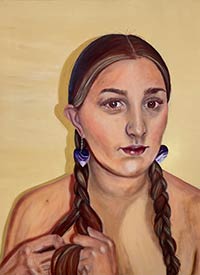 Araujo’s professional path is a replication of the meaning behind the jingle dance steps. She currently serves as a child life intern, working with young cancer patients at the Jimmy Fund Clinic at the Dana-Farber Cancer Institute.

“I’ve been building relationships and connections so far and next I’ll be planning my first therapeutic activity,” she said. At the same time, she’s got five paintings due before the end of the fall semester. For Araujo, awareness, healing, and art are all interconnected.