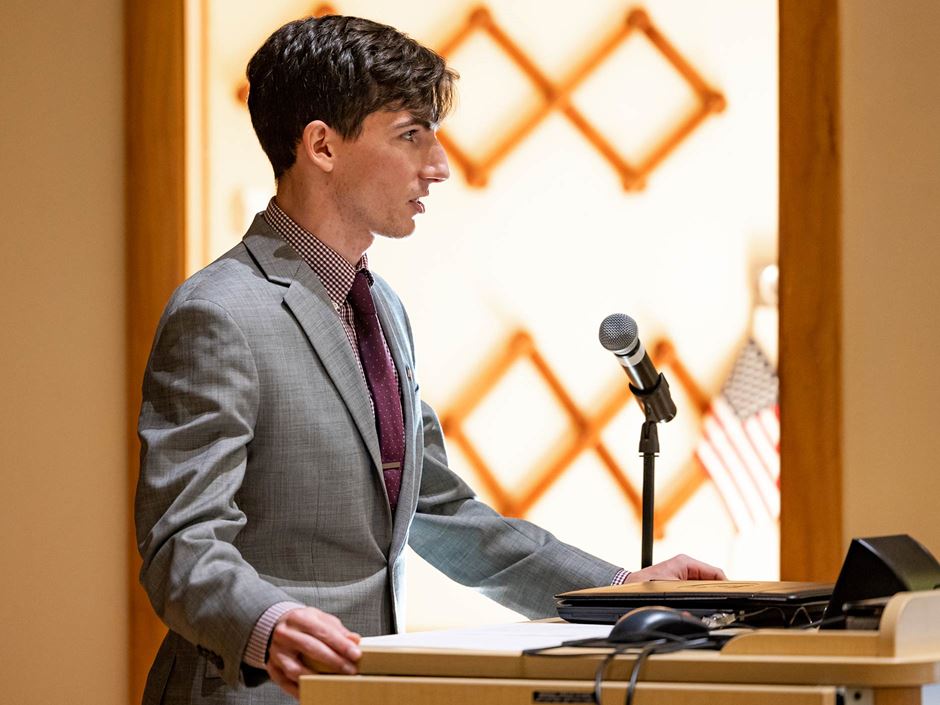 The Endicott community gathered to commemorate Veterans Day with a luncheon honoring veteran students, faculty, staff, and the servicepeople who couldn’t be present.
By: Sarah Sweeney

The Endicott community gathered yesterday to commemorate Veterans Day with a luncheon honoring veteran students, faculty, staff—as well as the servicepeople who couldn’t be present.

“I know there are some who couldn’t be here today,” said Endicott College President Dr. Steven R. DiSalvo. “Those who served and were wounded in the line of duty and gave their lives for others, and we remember them as well.” 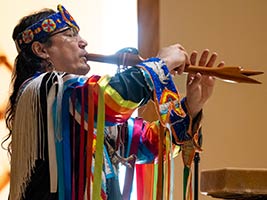 The luncheon, hosted by Rev. Dr. Gail Cantor and sponsored by the College’s Veterans Club, coincided with Native American Heritage Month and featured performances by Delwin Fiddler Jr., a renowned performer who was on campus to share Native American culture with students.

“We have veterans in all parts of the community,” said Dr. DiSalvo. “Students, faculty, staff, members of the Board of Trustees. We have one with us today, Jonathan M. Payson.”

Dr. DiSalvo kicked off the event by recalling a recent conversation with his father, also a veteran.

“I said to him, ‘It’s difficult to know who is a veteran, because when you serve you wear a uniform and it’s easily identifiable, and when you complete your service and you’re back in civilian clothes, you’re not easily identified as a veteran,’” he said.

“And my father said, ‘Oh, you can tell. You can tell by the look in their eyes, by the way they continue to serve people, by their compassion, by their love for this country. And for that, I’m extremely grateful.” 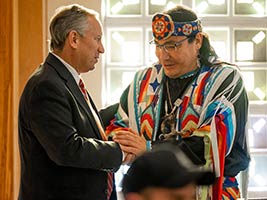 Maureen Znoj, an advisor to the Veterans Club and Director of Van Loan Undergraduate Programs, spoke of the various Endicott initiatives to engage the military and veteran community, including offering classes to members of the Coast Guard.

She told the crowd that she was humbled by the dedication of the active-duty military members and veterans she works with, including “one of our students who is deployed in Iraq but is still determined to continue her classes at Endicott,” she said.

Criminal justice major Patrick Joseph ’22 told the crowd about his journey to Endicott after active-duty military service, which he headed into after finishing high school. 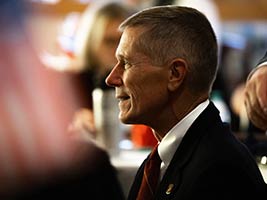 Joseph watched as his friends readied to graduate from college while he was just getting started. He also fielded questions from students and faculty who were eager to know why he was an older freshman, or whether he took an extra extra long gap year.

“After three and a half years away from a classroom, I foolishly thought I could blend in, and pick up where I left off,” he said. “In reality, what I discovered was that the transition from military back to a civilian college student was much more different than my initial transition into the military.”

“As a student veteran, I learned that it’s easy to feel like you’re behind in life. But as I’m now halfway through my last semester of undergrad, I look back on my time at Endicott and I can now say that I could not have been any more wrong in feeling that way,” he said.

“In fact, it’s because of the person I’ve become and the skills I’ve acquired in the Army that allowed me to have the success that I’ve had in my academic career—a combination of discipline and years of waking up at 5 a.m. to make sure I could attend those 8 a.m. classes 15 minutes prior.”