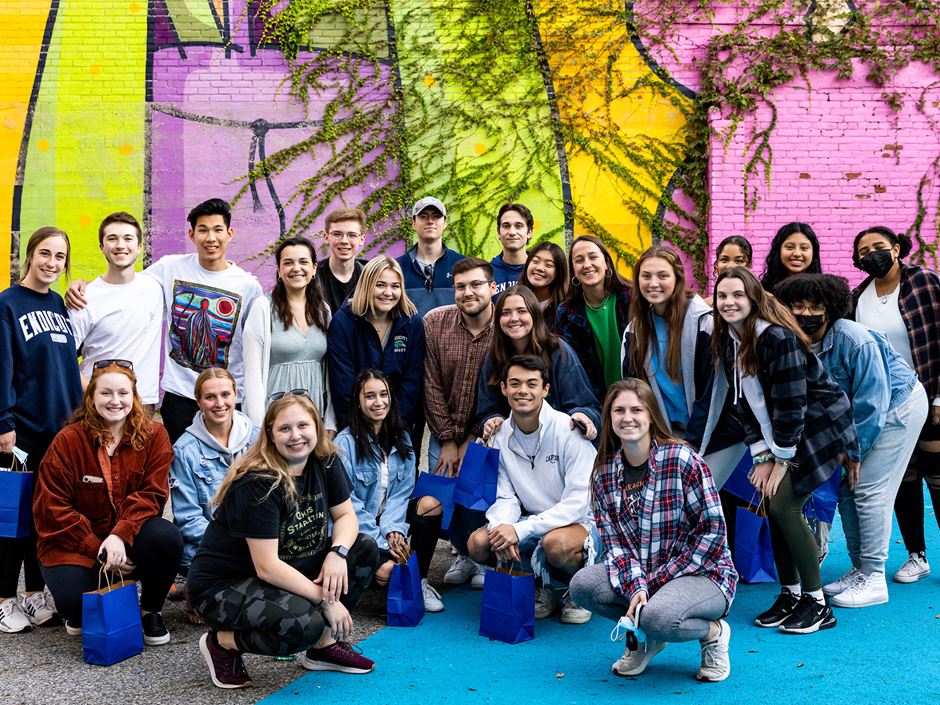 Last week, approximately 30 Endicott students headed to Salem’s El Punto neighborhood to create a winter clothing closet for its residents, many of whom are first-generation immigrants and families experiencing poverty.
By: Sarah Sweeney

For Andrea Rhoades, taking students to El Punto is more than a part of her job—it’s personal.

The downtown Salem neighborhood is just a hop-skip from Endicott’s campus, but for Rhoades, the Assistant Director of Student Engagement, it’s where community service, art, empathy, and social justice coalesce into a profound student experience.

Last week, Rhoades and approximately 30 Endicott students headed to El Punto—or, The Point—to create a winter clothing closet for its residents, many of whom are first-generation immigrants and families experiencing poverty.

Even so, El Punto is a place of vibrancy and immense pride, said Rhoades.

Before joining Endicott as the Assistant Director of Student Engagement, Rhoades worked as the Community Engagement Coordinator for North Shore Community Development Coalition (NSCDC) in Salem. The organization provides low-income housing for El Punto’s residents and works with them on creating opportunities, jobs, and revitalization efforts, including the conception of an open-air museum of 75 large-scale murals painted by both local and internationally renowned artists.

“Something I never want to do is take a group of people to a new neighborhood without telling them anything about it because that’s how people develop stereotypes and stigmatizations, and then they don’t go there with a good perspective or respect,” she said.

It was critical for Rhoades that students see firsthand the majesty of the kaleidoscopic murals, many of which stretch skyward on the sides of apartment and business buildings. They depict everything from animals to people dancing, and many illustrate the rich culture of the Dominican Republic and Puerto Rico, where a majority of El Punto’s residents are from.

“One of the reasons I love this neighborhood is its ethnic diversity,” said Rhoades.

At the turn of the 20th-century, Salem was a booming manufacturing town, drawing mostly French-Canadian workers. But after the Great Salem Fire of 1914, thousands were left homeless—then companies fled, too. The result was an economic downturn that persists even now.

Today, quaint bodegas and Latin restaurants line the streets around El Punto, which has only recently begun to lure tourists from the Halloween hubbub of downtown.

“NSCDC helped turn the neighborhood into an urban art museum to attract tourism,” said Rhoades. “They worked with residents to write a grant, and made a beautiful environment for residents but also for tourists. It’s about breaking down physical barriers—and it’s worked.”

Rhoades sees an important parallel between community service and preparing Endicott students for their futures. “We’re showing students that you want to work for a company that’s socially just, that’s not racist,” she said. “Also, we encourage them to explore what a company is doing and look at its philanthropy—does it match your values? Don’t sell yourself short.” 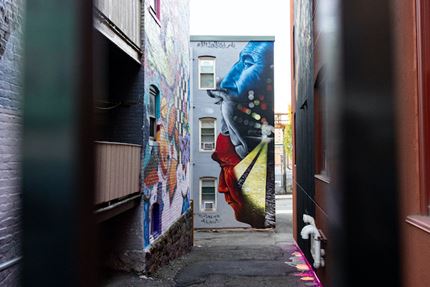 El Punto is home to an open-air museum of 75 large-scale murals
painted by both local and internationally renowned artists.

This is the second year Rhoades has brought students to El Punto. On this trip, sponsored by the Department of Student Engagement and Office of Community Service, students hung gloves and hats in two local parks for residents who may not be able to afford new clothing for the long winter ahead. Through October 18, the Endicott community can drop off winter clothing in Lower Callahan.

“It’s different from community service that I did back home,” said Gibbs. While she’d previously helped raise money for a foundation that builds homes in Nepal, she noted that there was something special, and more personal, about going out in the community and doing the work yourself.

“I have Latin roots, and I like art and I like looking at the pieces, but I also like giving back to people,” said Boston native Aria Dias, a freshman nursing major who learned about the event through Endicott’s celebration of Hispanic Heritage Month. “I thought this would be a fun opportunity, and I always put others before myself.” 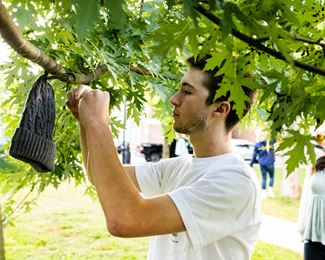 A sports management major, Massaro drew a connection between athletics and service. “They’re two things that can unite a community, and I’m all for it,” he said.

As the evening winded down, a homeless man approached Massaro, who’d just finished hanging gloves and hats from the trees in Lafayette Park.

“He told me that people belittle him sometimes, and he was nervous because he wasn’t sure of our intentions,” said Massaro. “To have that conversation, and do some good for him, made my entire day.”