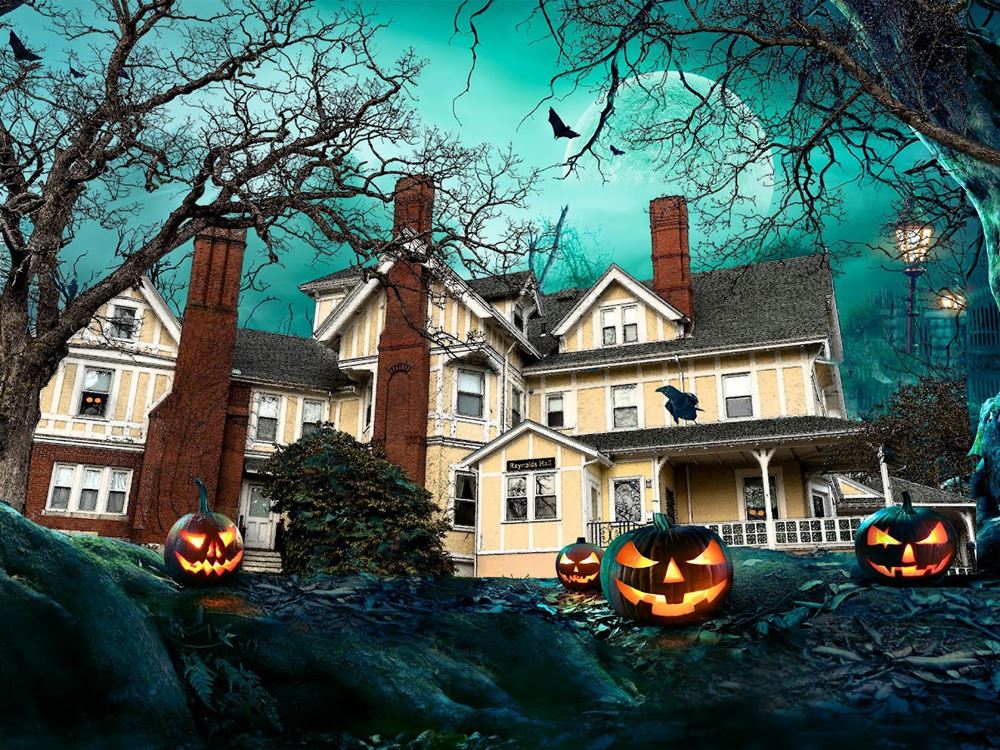 By: Rosemary Poppe and Sarah Sweeney


In a region known for its witchy history and ghostly lore, Endicott College has managed to escape the spooky spotlight—until now.

“I always say that Salem, and that includes Beverly, is one of the most haunted locations in the country,” said Sam Baltrusis, bestselling author of “Ghosts of Salem: Haunts of the Witch City” and a paranormal expert who has been featured on TV shows including the Travel Channel’s “A Haunting,” “Most Terrifying Places,” “Haunted Towns,” and “Haunted USA.”

While Salem continues to lure throngs of tourists each Halloween, Beverly was once a part of Salem, and Endicott’s campus is even bordered by what’s called Witches Woods—a name earned in the 17th century when accused witches fled from their prosecutors.

“I believe the Salem witch hysteria left a psychic imprint on the land and the residual energy continues to replay over and over,” continued Baltrusis. “Because of Salem’s history, I think many of the walking ghost tours continue to stir the cauldron and give energy to the hauntings.”

But ghost tales at Endicott are nothing new. During past Halloweens, students used to gather outside to hear spine-chilling supernatural stories. Victoria Fraser ’18 has been sharing some of those spooky stories on her blog, Toria’s Tales, since graduating.

“The haunted lore was definitely known among everyone as soon as I started at Endicott,” said Fraser. “I definitely heard my fair share of experiences over the years—everyone seemed to have at least one story.”

Ask around about haunted happenings at Endicott, and Reynolds Hall is the most common answer.

It’s said that a young spirit haunts the towering yellow manse, now a residence hall. Prior to its acquisition by Endicott, the building was first a private home and later the site of the Kendall Hall School for Girls.

Students have reported the spirit of a young girl watching from the stairwell or have seen her reflected in mirrors. Other students have felt watched by someone unseen, and lights have been known to turn on and off, along with blinds opening and closing on their own, furniture inexplicably moved, and more.

For Janice (Mattson) McKearney ’85, one Saturday night in Reynolds lives on in her memory.

“Most of the people in the dorm left for the weekend, and the few of us there decided to explore,” she recalled. “We wanted to check out the attic.”

McKearney and her friends found the attic door in the ceiling of the third-floor hallway. “We stacked a chair on a desk and climbed up. As the first person bravely lifted themselves up and was almost in, the doorbell started ringing,” she said. “It was quick and ongoing, unlike any regular visitor would do. Ding-dong, ding-dong, ding-dong—persistently and nonstop.”

Everyone ran downstairs to answer the door. “We were joking about making the ghosts mad,” she said. “But once we got to the door, no one was there. The ringing stopped and we moved the desk and chairs back to their respective rooms and never tried to explore the attic again.”

“The legend is that all of the paintings in the house turned upside down when she died, and a lady wearing a pink dress has been spotted by faculty and students over the years,” he explained.

Years ago, Baltrusis led tours on a ferry that passed Winthrop Hall, which overlooks Salem Harbor.

“I’d always look up at beautiful Winthrop Hall from the water, hoping to see the Pink Lady. No luck. But the people who’ve seen her say she’s very welcoming and is a benevolent spirit.”

In the 1950s, then 7-year-old Priscilla Tupper, the daughter of Eleanor Tupper (one of the four founders of Endicott), supposedly happened upon the spirit one evening.

Though Eleanor had heard of hauntings within the building, these stories were never shared with young Priscilla. Donning a blue gown, the female spirit rounded the corner of the veranda and approached Priscilla. She wasn’t scared—not at first—because the ghost appeared very real.

However, as the spirit neared, Priscilla noticed that she was unusually quiet and seemed to be floating rather than walking. When she saw that the woman had no legs, Priscilla dashed from the porch.

Pink Lady, Blue Lady, White Lady—depending on who you talk to, the Winthrop Hall spirit goes by many names. She’s been seen descending the stairs in a pink gown at parties, gazing out of a window toward the sea while wearing white, and even strolling the oceanside with her gown trailing behind her.

But even now when you walk into Winthrop Hall, you’ll encounter one stark quirk: The painting in the foyer is upside down.

And if someone tries correcting it, they’ll find that in the morning the items in their room have been rearranged and that the painting has righted itself—upside down, of course.

“Do I think there’s a spirit haunting Winthrop?” wondered Baltrusis. “I do, but I believe there’s more to her story and she’s sticking around until we tell it correctly.” 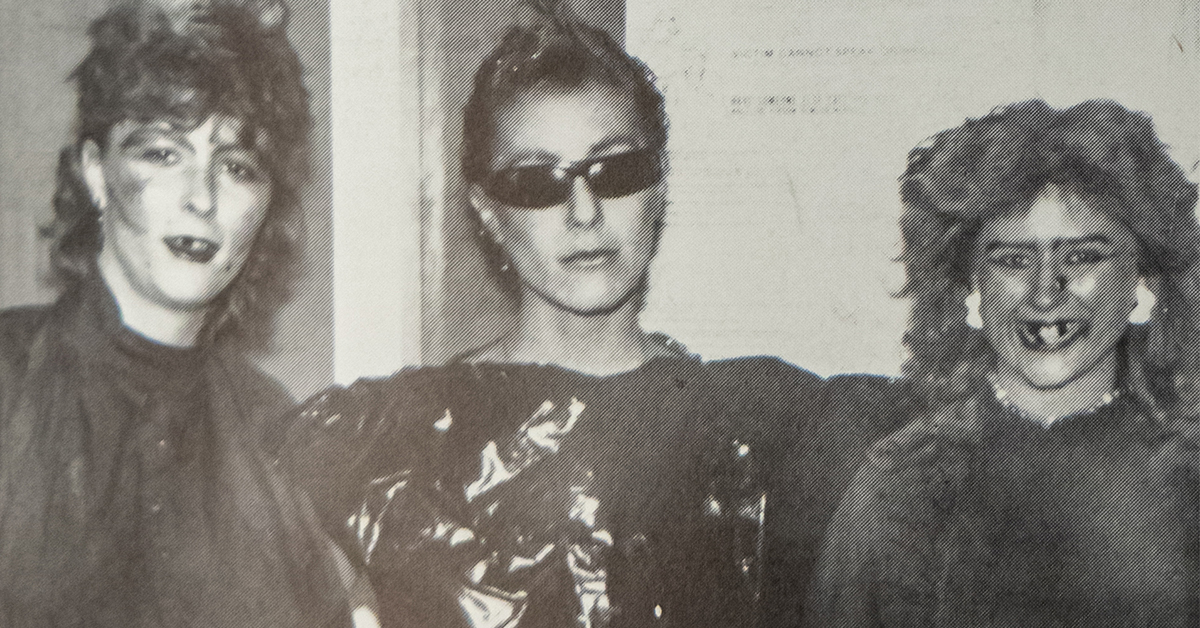 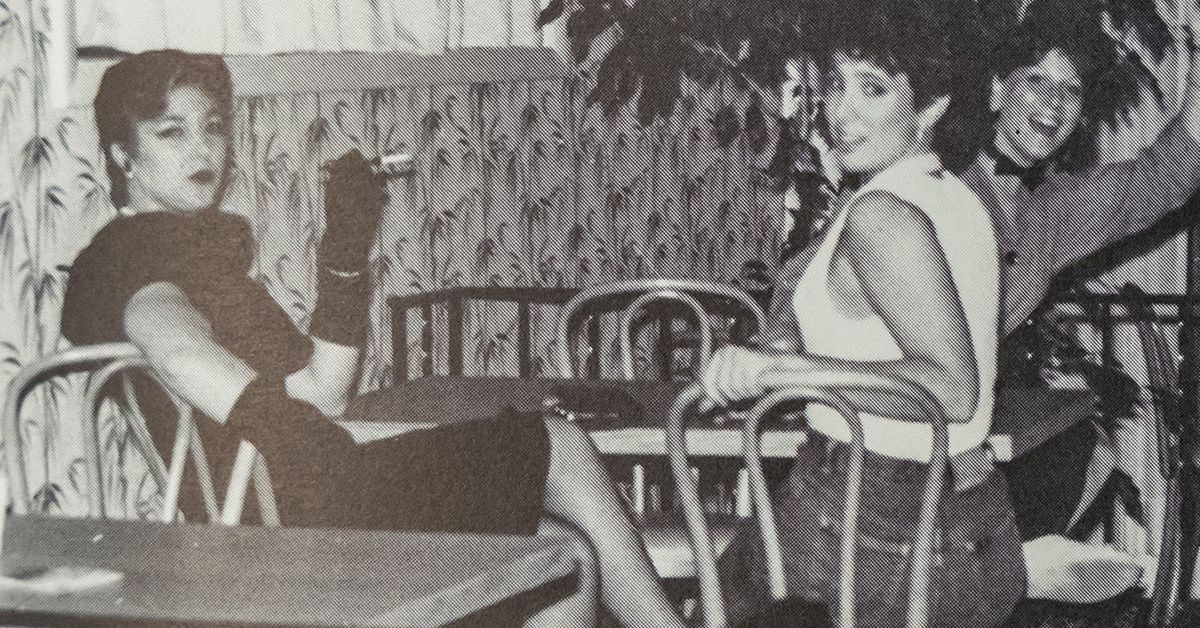 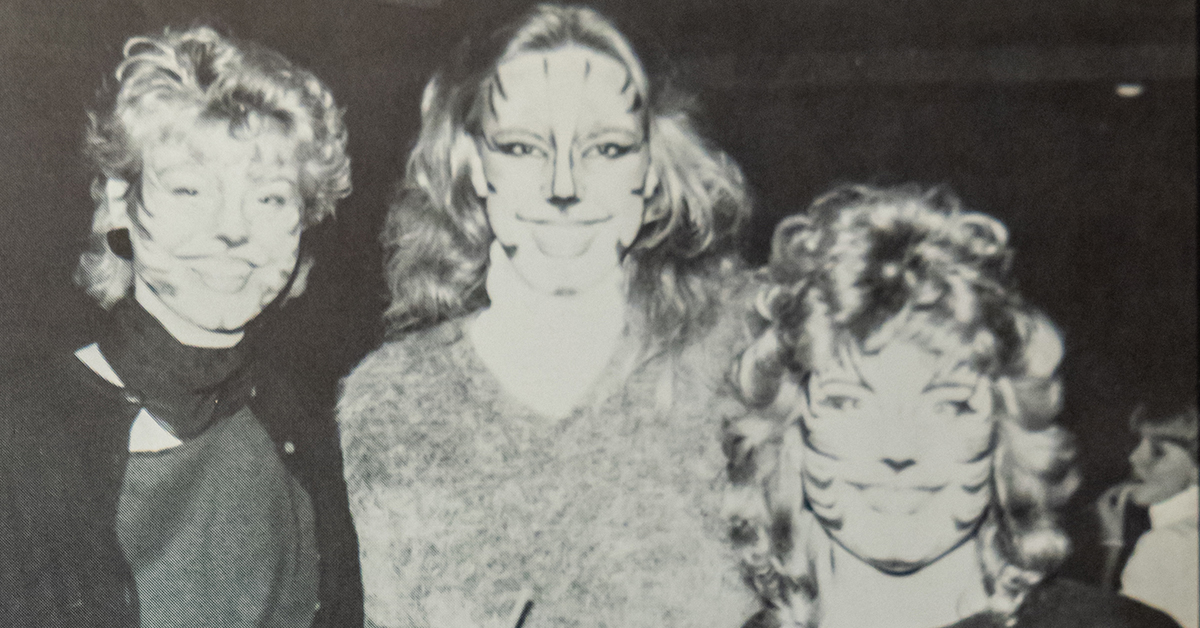 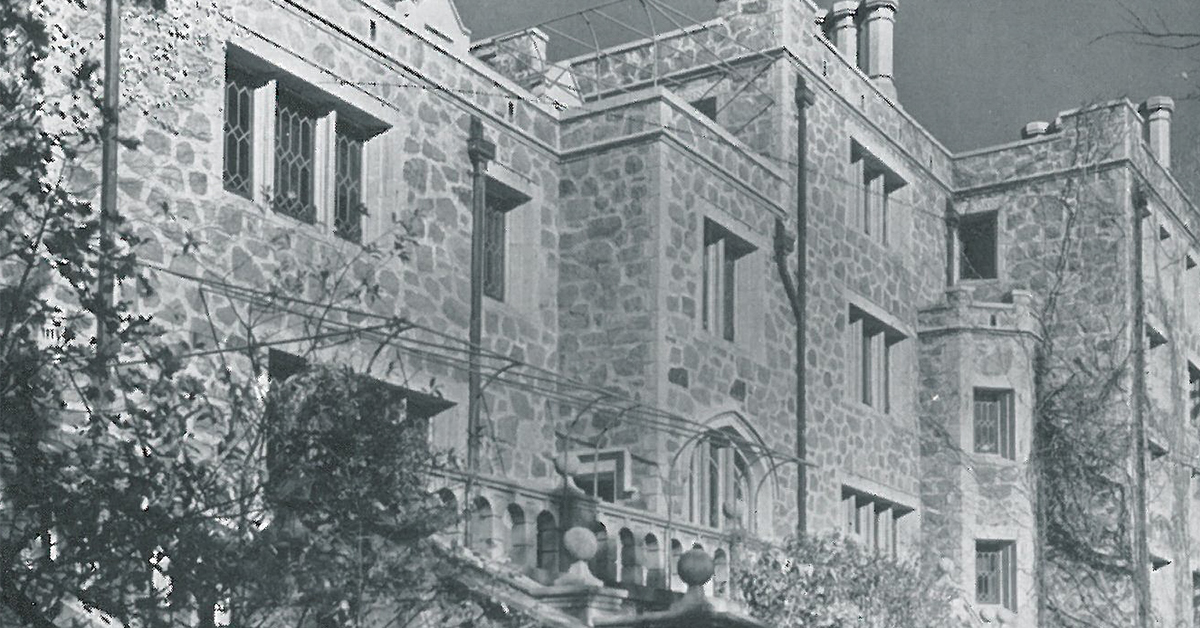 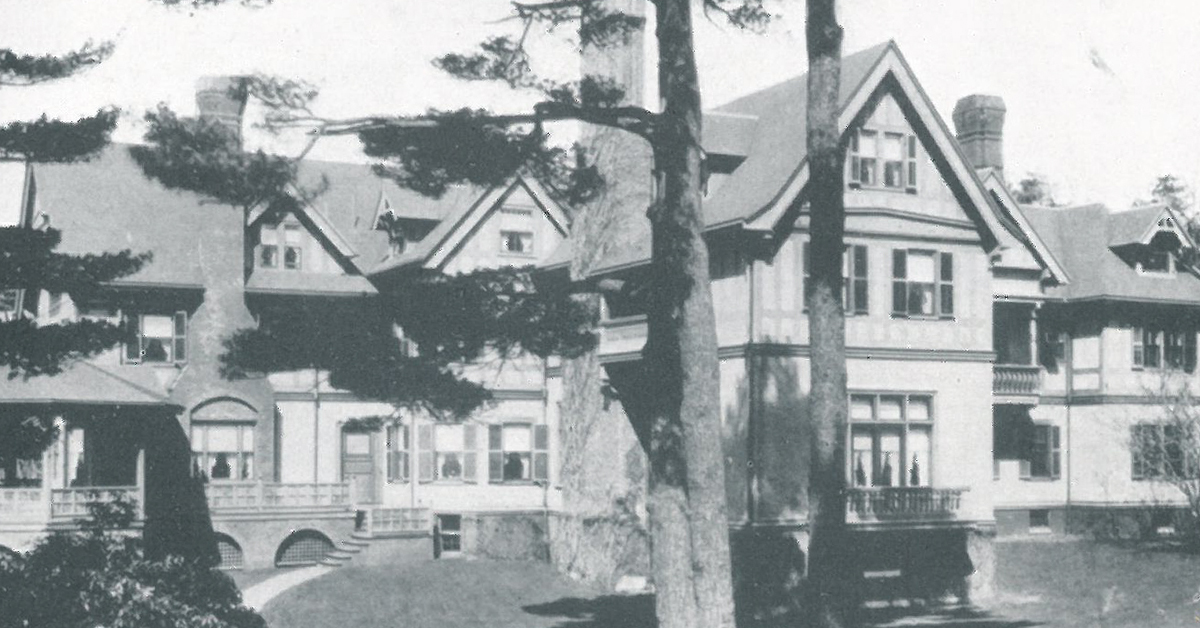 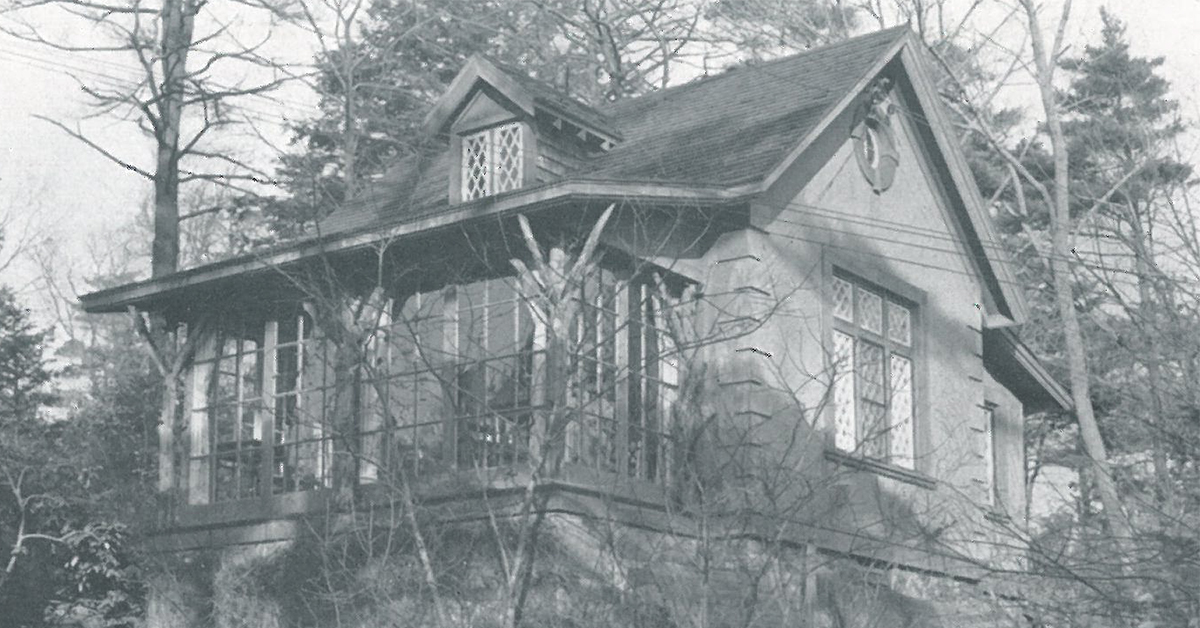 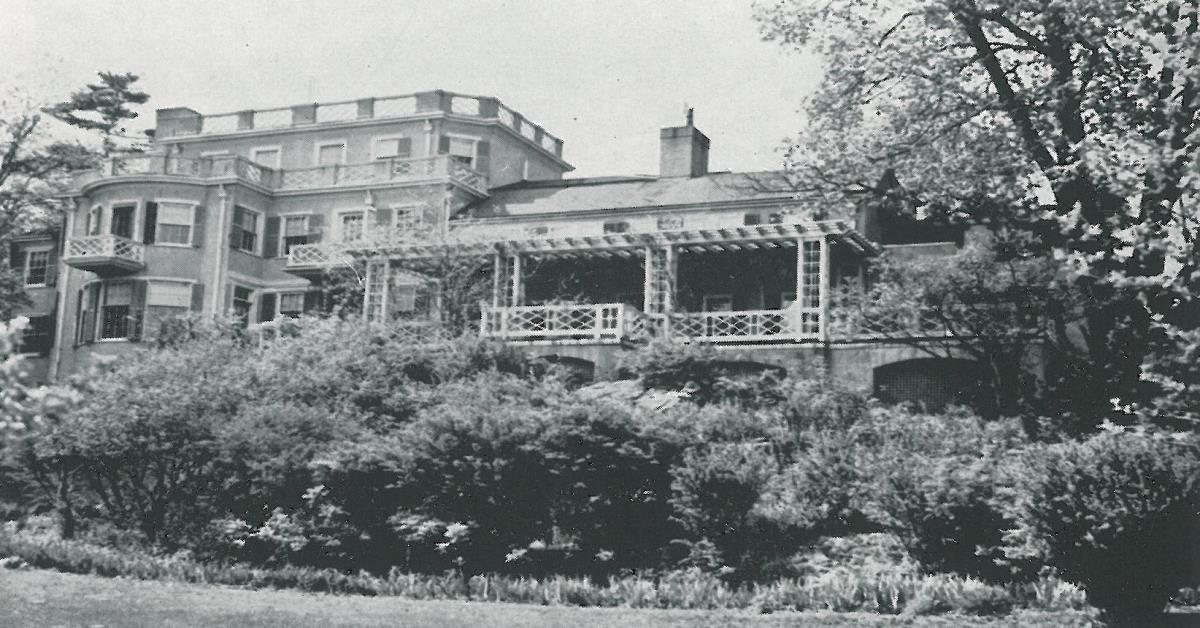 Over in Tower Hall, many alumni have reported hearing strange sounds, including a basketball bouncing on the second floor—when no one else was in the building.

In the 1970s, one daring group of students held a séance, and one participant allegedly began speaking in another voice while recalling an accident involving … a bouncing ball.

Brindle Hall lore centers on a former student in the 1960s who’s supposedly still there.

Its residents have reported hearing footsteps, being shoved from behind, and some have seen a ghostly figure in their rooms at night. Handprints have appeared on the windows of the fourth floor—on the outside of the glass.

But perhaps the eeriest part of Brindle Hall lore is the trees outside the building, whose branches have been known to spell out the lingering student’s name: Julie.

Truth may be stranger than fiction, but the magic of ghost stories lies in the uncertainty, the lack of facts, the mystery, which spirals into something bigger and more enigmatic over time.

“I worked at Endicott one summer between freshman and sophomore year when the campus becomes a hotel through Misselwood,” she recalled. As part of the job, she’d audit empty dorm rooms and count the beds in each.

“I had already heard all the ghost stories, so you can imagine I wasn’t a fan of walking through the houses alone. One day I had to go to Winthrop and it was actually being renovated, which supposedly can boost activity,” she said.

“I zipped through the first floor as fast as possible, then I hit the second floor and it felt like I was in a horror movie—going through each room down one long hallway,” she said. “About halfway down the hall, one of the doors slammed shut and I panicked. Next thing you know, my master key stopped working.”

Fraser took that as a sign and fled. But later that day, she returned with a coworker. As soon as they reentered the building, a loud crash emanated from upstairs.

“We went up to find out what it was and found nothing wrong with any of the rooms,” she said. “We tried to determine which room the noise came from and we believe it was the room where construction workers had found wallpaper from the original house under the paint—so spooky!”

Baltrusis believes spirits stick around because they have unfinished business.

“I recommend digging for the historical backstory of the home so you can understand why the spirit is there,” he said.

“Oftentimes, people learn to peacefully coexist with spirits. If things start to turn negative, it’s usually something explainable like construction on your house or the spirits feel disrespected. I use sage and palo santo to cleanse the energy at my home and would recommend the same to those living in a home with residual spirit energy. The irony is that many of the techniques I use today would be considered witchcraft in 1692.”

Join English Professor Daniel Sklar for more spooky storytelling at the firepit by the Lodge on Tuesday, October 26, at 7 p.m.