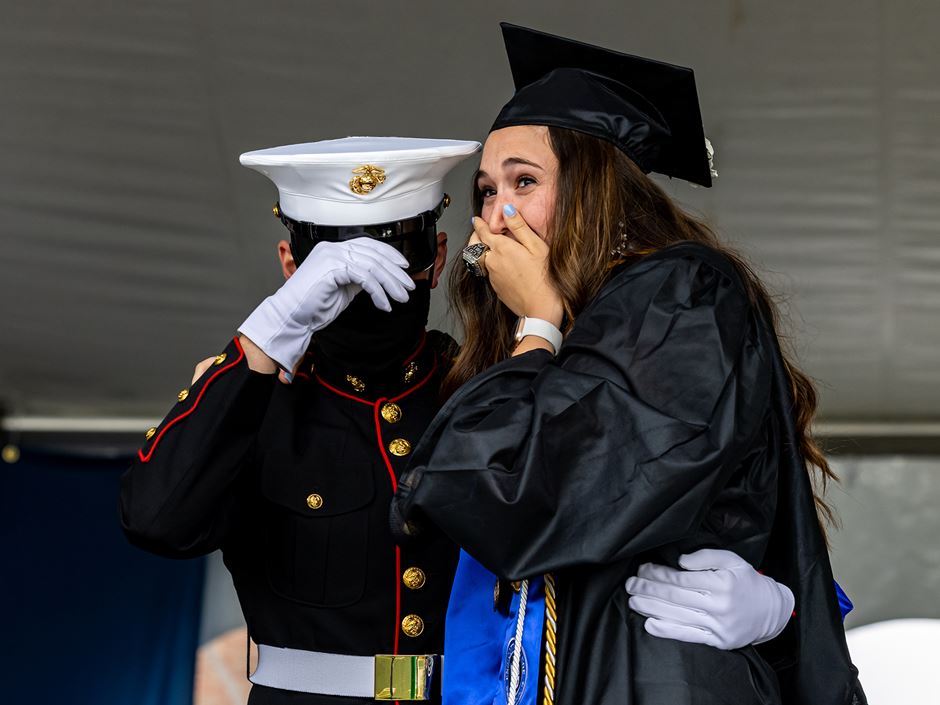 Endicott College, often internally referred to as the best-kept secret of the North Shore, can perhaps no longer use that nickname due to a touching Commencement moment that has gone viral. The footage of a surprise military homecoming right on the Commencement stage has appeared everywhere from Good Morning America, to news channels across the U.S., to Yahoo news.

About two weeks prior to the 2021 Commencement ceremony, the family of a graduating nursing student, Emily Booth, alerted the College that Emily's brother, Private First Class Ryan Booth of the U.S. Marine Corps, would be coming home from boot camp for the first time in nearly a year on the day before Commencement. Inspired by this exciting news, the Endicott Commencement team quickly jumped into action to make Ryan's homecoming special and surprise Emily right on the stage as she walked across to accept her diploma.

As you can see in the clip, it was a heartwarming and emotional moment for both siblings, not to mention for every attendee at the event and streaming viewers.

The College quickly sent out a press release, and within hours of the video's release, along with the story and photos, the local news stations picked it up. By Sunday, the story was published on People Magazine Online, and it has continued to gain momentum ever since.

Not only was the clip aired and Endicott College mentioned on news channels from Anchorage, Alaska, and Los Angeles to Houston, Naples, Fla., and up the east coast, it also appeared on Good Morning America, CBS This Morning, and NBC's TODAY Show, as well as numerous online news sites.